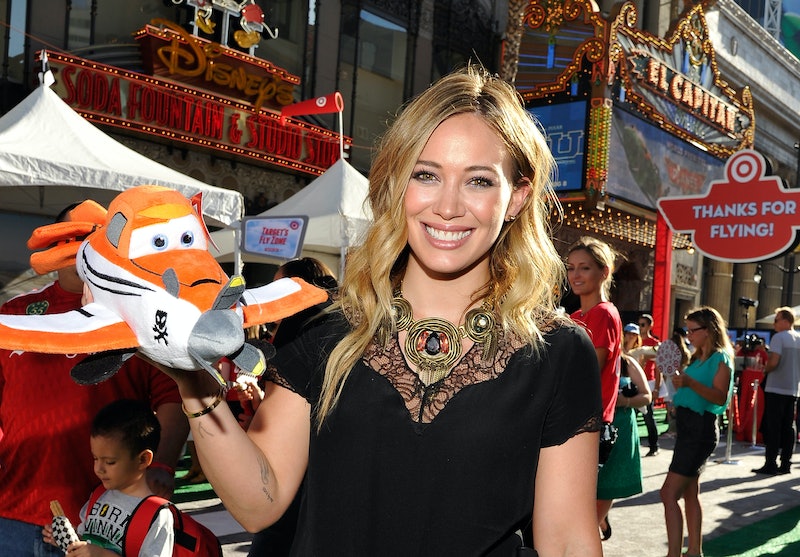 Hilary Duff has been off the celebrity radar for a while doing things like getting married, having a baby, and raising that baby who is now almost two-years-old. But did you know she's also been writing books and that she plans to release her fifth album next year? I sure didn't, and the last I saw of her was her short stint on season three of Gossip Girl. For many of you, the last memory is probably even further back from her days on Lizzie McGuire. Duff still has some pretty passionate fans though, and they've been keeping up with her. One fan, Josh, who runs the Twitter account @hilarynews got the chance to interview Duff himself. The two recently met up in Toronto and Duff answered a ton of questions most of which will lead to even more questions if, like me, you're not a hardcore Hilary fan.

Here's five question the interview might leave you with and their answers.

Josh asked Hilary what inspired her to return to the studio after so long (her last album, Dignity, was released in 2007) and she responded, "I think it was just taking such a big break. I wrote a bunch of books. I wasn’t doing much." For one, what? How is writing a bunch of books not doing much; and, for two, what are these books? Apparently, Duff wrote a series of three young adult books called the Elixir trilogy and writing them led her to realize "that that’s not really where my passion was."

I thought she had one and that it was the one with the song from The Hills intro. No. She has four: Santa Claus Lane, Metamorphosis (the one with The Hills theme song), Hilary Duff, and Dignity. I guess she was busy post-Disney Channel.

3. Hilary Duff writes her own songs?

Yep. It's not just books for Ms. Duff, she's been writing the music for her upcoming album.

I’m still writing and I’m still recording, and I’m still taking songs that I love. There are some songs on the record that I recorded, that I didn’t write, but I did some of them as demos. So I’m not like a snob where I have to write them all.

A lot of pop singers don't write any of their own music, so this is actually pretty cool. She's not a snob though! Don't forget that.

4. Hilary Duff was in indie films?

Duff was in According to Greta with Melissa Leo and War Inc. with John Cusack. She says of the roles,

I feel lucky for all of those experiences. Greta was the first time I went and did a movie on my own and I was living there by myself, that movie holds a special place in my heart, I think like nine people saw that movie.

This doesn't mean she looks down on or regrets her mainstream roles. She makes sure to point that out. "I think my movies are nostalgic for people, they feel like little kids in their heart because at the time it meant a lot to them."

5. Hilary Duff freaks out at the paparazzi?

Another question might be, Hilary Duff continues to be followed by the paparazzi? And the answer to both of these is yes. But she isn't an Alec Baldwin type of freak-er out-er.

I snapped on a paparazzi the other day. It was bad ... One of them that I hadn’t seen before – I think he was some Russian guy, he was such a jerk – just getting way too close to me and overstepping his boundaries and I just went off. Mama bear came out, and then I turn around and someone was filming it. I don’t like to lose it like that, it takes a lot for me to really get pushed there but I’m sure that people understand.

Personally, I'm not a fan of people referring to themselves as "mama bear," but Hilary just seems so nice that I'll give her a pass. Also, she must be pretty down-to-earth to give such an extensive interview to someone who's basically a fan club present. Way to go, Hilary! I'm sure your fans really appreciate it.