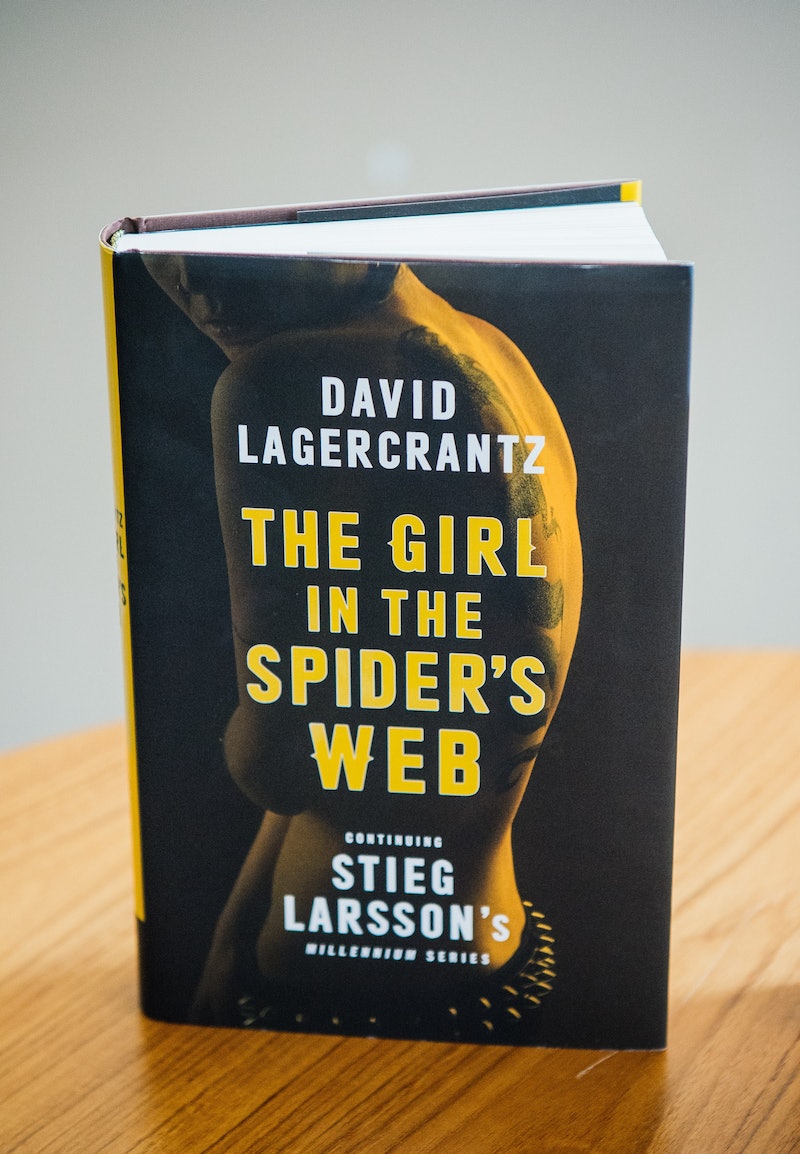 Penned by celebrity ghostwriter David Lagercrantz, The Girl in the Spider's Web hit store shelves this week, but, if author Stieg Larsson's companion of 32 years, Eva Gabrielsson, inherited the rights to the Millennium Trilogy, the posthumous novel would never have happened. Stieg, who died of a heart attack in 2004, didn't live to see his Millennium Trilogy become a success, and the handling of his estate has been nothing but a series of Lisbeth Salander-worthy controversies. The Girl in the Spider's Web is only the latest of them.

It all began with Stieg's untimely death. According to Swedish law, an unmarried survivor is not entitled to her late partner's estate, unless there is a will in place. Stieg didn't have one, and Gabrielsson was left out in the cold when her companion's father and brother inherited the rights to his work. She's a widow in all but the legal sense, and she feels jilted by both the law and her late lover's family.

Many Swedes sympathize with Gabrielsson, who helped Stieg write his incredibly successful Lisbeth Salander novels. Other fans align themselves with the Larssons — Erland and Joakim — who inherited their son and brother's $50 million estate by default. With the two parties now past the point of reconciliation, the deep divide within the fandom is unlikely to be mended.

There Would Be No Movies

Or, at least, not so many. Gabrielsson says that the Hollywood film adaptation of The Girl with the Dragon Tattoo, starring Rooney Mara and Daniel Craig, was "too far from the books." According to Vulture's Boris Kachka, Gabrielsson would have been more selective in choosing a team to adapt Stieg's work for the big screen.

Social Justice Would Be Emphasized When Talking about the Novels

Stieg was a very political man, and Gabrielsson has often expressed worries that her late partner's message is lost under his relatives' control. From a 2012 Spiegel interview: "Gabrielsson says that the real Stieg Larsson was concerned about injustice in society, both in life and in his books, about truth between people and about solving the crimes that men commit against women." The first three Millennium novels were supposed to be titled Men Who Hate Women, but Swedish publisher Norstedts only put out the first under that name.

There Would Be No Ghostwriters

Gabrielsson likened Lagercrantz's involvement to plagiarism in a 2013 interview with The Independent. Seeming to reference Stieg's political work, she said that, in her personal opinion, the use of unconnected ghostwriter Lagercrantz "would trample upon the original artist’s intentions."

The Fourth Book Would Be Completely Different

All this doesn't necessarily mean Gabrielsson wouldn't have allowed the Millennium series to stretch past a trilogy, however. Stieg's laptop has remained in her possession since his death. Gabrielsson says it contains 200 pages of the fourth Millennium novel, God's Revenge , and, according to rumors, outlines for the other six Lisbeth Salander novels Stieg wanted to write. The Girl in the Spider's Web is not God's Revenge — which Joakim claims is the fifth, not fourth, Millennium installment — and Gabrielsson has now either discarded or secreted away the material she once possessed.

There May Not Have Been Any Sequels at All

At one time, Gabrielsson was finishing God's Revenge for publication, but she has since abandoned the project. She now says that the series should be left as a trilogy, and that it is no one's place — not even hers — to attempt a completion of Stieg's work. Although it seems as if Gabrielsson has only espoused this view since the announcement of Lagercrantz's sequel, it's entirely possible she would have had the same change of heart if she'd inherited Stieg's estate as his widow.