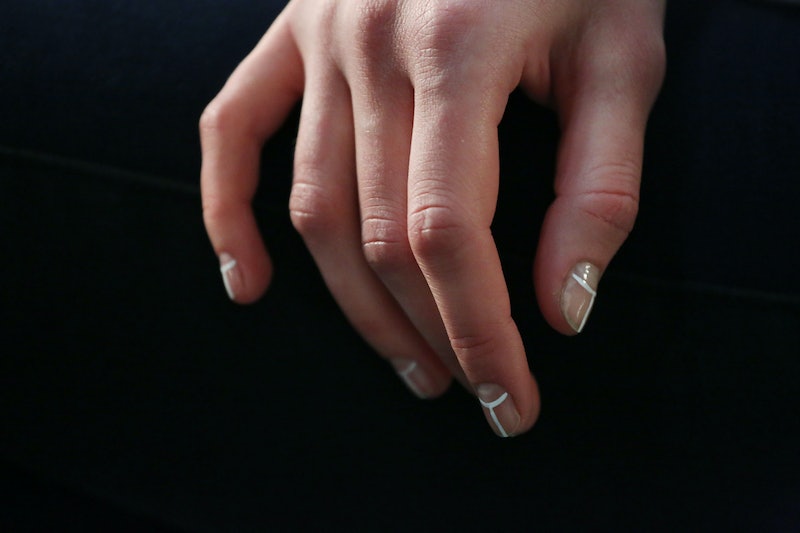 There's nothing better than getting a manicure, because afterwards, your nails are all evenly shaped, the shiny nail lacquer is slicked on opaquely, and your cuticles are all cut. However, as nice as my nails may look, I can't help but wonder: Is cutting cuticles bad for you? I've heard lots of beauty myths about cuticles and had to get to the bottom of this age-old question.

Pro manicurist Mar y Soul told Byrdie that there's a reason why cuticles can be stubborn to remove and remain removed. Cuticles are skin tissues that are attached to the nail plate, "to seal space between your natural nail plate and living skin. It prevents entry of foreign materials, microorganisms, and infections," Mar y Soul told Byrdie. So essentially, cutting your cuticles opens up multiple doors for harmful bacteria to easily seep into your body. Yikes!

It's especially harmful if you have a habit of picking at your cuticles with your nails. No matter how much of a germaphobe-clean-freak you are, your nails house and create countless of unseeable bacteria constantly. (Nail biters, beware!) Imagine what you're doing to yourself when you're picking and ripping away your cuticles with your fingernails. Yup, it's a bumpin' germ party right on your fingertips.

If you really don't like how cuticles ruin the look of your mani, an alternative that pro manicurists recommend is to push them down. Self-acclaimed celebrity "MAN"icurist Tom Bachik told Harper's Bazaar , "Gently pushing back the cuticle will reveal excess cuticle that can safely be removed. Once cuticles have been gently pushed back and the excess cuticle and bits have been removed, use a soft sponge buffer to exfoliate the cuticle area and nail surface." However, be sure you're careful with the amount of pressure you apply when you push back your cuticles. The key word that Bachik used is, "gently."

Some of us may push back our cuticles too forcefully out of habit and can cause our nails to grow with horizontal ridges. It's time to break that habit. Don't be the reasons your nail beds suck.

There are countless other ways you might be ruining your nails, but with this newfound knowledge, cutting cuticles will no longer be one of them!