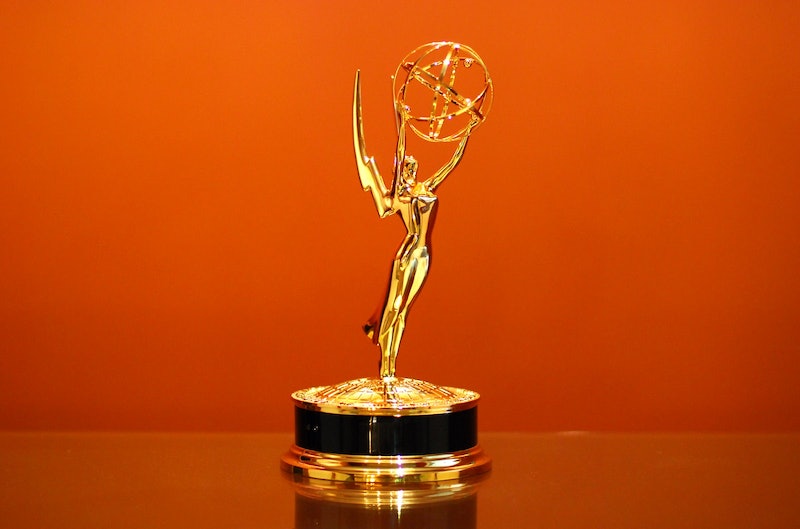 The VMAs are over, so it’s time to focus on the next red carpet: the 2015 Emmy Awards. Granted, they don’t have Miley Cyrus hosting, but Andy Samberg is a hell of a lot funnier so it's really NBD.

The Emmys are the Oscars of the small screen, whether that’s an actual TV, a laptop, or an iPhone. Our grandparents had to sit around a ginormous television set with the whole family back in the day, with everyone agreeing on what to watch on their black-and-white screen. They didn’t have many choices then, so it probably wasn’t such a tough call. Today we have about a bazillion channels, so if one person wants to watch Dating Naked and another wants to turn on CNN, you can just split up.

At this years Emmy Awards, new shows like Better Call Saul and Unbreakable Kimmy Schmidt are up against old staples like Mad Men and Modern Family, and Taraji P. Henson is up for playing badass Cookie Lyon in Empire (hooray). If you love TV (and who doesn’t, with Amazon’s Transparent , Netflix’s Orange Is the New Black , and Comedy Central’s Inside Amy Schumer and Key & Peele), you probably live tweet the Emmys and let out a virtual scream when your favorite show wins (or loses). The only thing that’s missing from this year’s Emmys is Broad City, but what can you do? Not every awesome show gets nominated I guess.

In any case, if you’re a TV junkie here are 10 books about TV that are funny, informative, and — in some cases — a little ridiculous. Have fun.

Live From NY: The Complete, Uncensored History of Saturday Night Live as Told by Its Stars, Writers, and Guests by James Andrew Miller and Tom Shales

The first edition of this book came out to celebrate SNL’s 30th anniversary, and it was updated in 2014 for the 40th, to cover 2002 to the present. There are interviews with favs like Tina Fey, Amy Poehler, Fred Armisen, Kristen Wiig, and Bill Hader, tidbits from newer cast members like Ghostbuster Kate McKinnon, and discussions about the controversy surrounding the show’s lack of diversity.

Who better to compile a humongous guide to The Simpson’s than creator Matt Groenig? There are full episode recaps in case watching the shows just isn’t enough, along with photos, facts, and jokes.

Saved By the Bell Guide to Life

Running Press published this esoteric tome about Saved By the Bell in 2011. OK, maybe it’s not esoteric (it’s also only like 160 pages), but if you loved Saved By the Bell or you’re just an early ‘90s nostalgia junkie, check it out.

This one is definitely deeper than Saved By the Bell. Carter is the bestselling author of The Late Shift (about Leno and Letterman and the drama of late-night TV) and with this one he delivers an entertaining behind-the-scenes look at the cutthroat world of TV. It’s a fun read for TV lovers who’re interested in what really goes on behind the scenes.

Even This I Get To Experience by Norman Lear

Lear is one of the greats — he brought us classics like All in the Family, Maude, Good Times, The Jeffersons, and Mary Hartman, Mary Hartman. So if anyone can write a great memoir about working in TV, it’s him. Kirkus calls it a “fascinating backstage look at the evolution of the American entertainment industry.” There’s a PBS doc about his life in the works too, so look out for that.

Tartikoff was head of programming at NBC from 1980 to 1991, and he was responsible for shows like Hill Street Blues, Miami Vice, and The A-Team. Yes, there are stories about Mr. T. If you have dreams of working in the TV industry, it’s a fun, quick read.

Top Of the Rock: Inside the Rise and Fall of Must See TV by Warren Littlefield and T.R. Pearson

Back in the day, Must See TV meant shows like Cheers, Seinfeld, Friends, ER, and Law & Order — you know, the best shows ever. The book is pretty honest about the ups and downs of creating both hits and flops, and it’s cool to hear how shows like Seinfeld made it to air.

Conversations With My Agent by Rob Long

Long was a writer on Cheers (lucky!), but when the show ended, he was just another out-of-work writer in L.A. But an out-of-work writer with Cheers on his resume. Still, he’s funny and honest about the process of writing, pitching, and banging your head against the wall until something happens.

Why Not Me? by Mindy Kaling

Kaling is like a TV goddess: Writer, producer, creator, director, and actor with The Office and The Mindy Project under her very adorable belts. Her latest book isn’t a TV how-to, but it’ll no doubt be funny as hell and it’s by a TV guru, so it’s a perfect pre-Emmys read.

This one’s by the creator of Everybody Loves Raymond, and it’s a funny memoir about life in TV land. If you have secret dreams of writing TV sitcoms, it’s worth a look.

So let Mindy Kaling and Norman Lear inspire you to finish that TV pilot, or just read them for fun. And check out the Emmys on September 20.