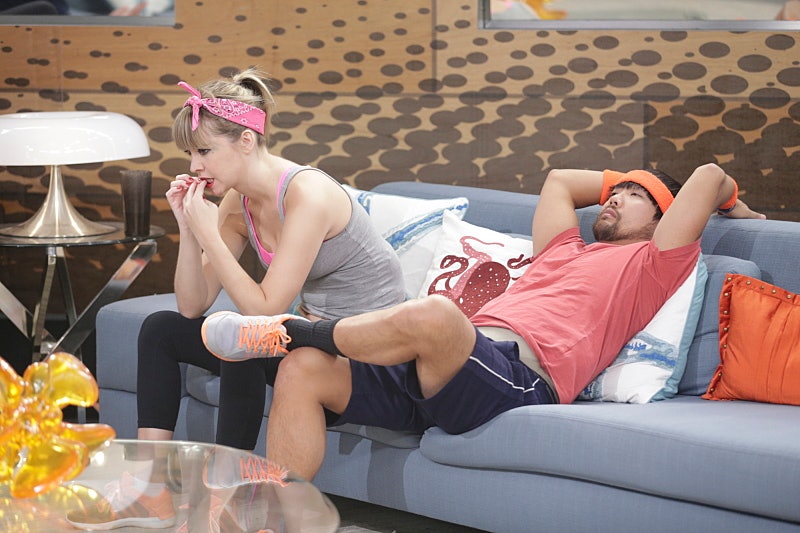 You know when you're watching a horror movie, and someone walks down a dark, creepy hallway where you know a bloodthirsty serial killer or monster is just waiting to pounce? You usually yell things like "No," "Stop," and "Don't" even though you know the actors in the movie can't hear you. That's exactly what I was doing while watching Sunday night's episode of Big Brother 17 . In this horror show, James and Meg were the victims while Head of Household Vanessa was lurking in the shadows waiting to put her prey up for nomination this week. And the sad part is, James and Meg might have been able to stop it all from happening.

Vanessa was playing all sides this week. She is HoH after all, so that's kind of what you do and are even expected to do in that position. With her new side alliance with John and Steve, Vanessa toyed with the idea of putting Austin, Liz, or Julia up on the block. However, after speaking with James and Meg in the HoH room, it became abundantly clear that she needed to put these two besties on the block.

So what did James and Meg do that caused Vanessa to perform such a complete 180? Well, Meg did what she's been known to do from time to time in the Big Brother 17 house: cry. Vanessa proposed the idea of putting one of the pair up as a pawn this week after she received crickets in return for asking about who these two think she should nominate. James said he would go up on the block in place of Meg, and then she started sobbing and saying that she would never want James to put himself in danger like that for her and that she should be nominated instead.

Oooooh, big mistake, guys. This lovey-dovey exchange right out of an O. Henry short story immediately signaled to Vanessa that James and Meg are super-tight, and we all know that when you have such a loyal dynamic duo in the Big Brother game, it needs to be broken up. So James and Meg became public enemy No.1 for Vanessa.

Unfortunately, neither of them picked up on that at all. They both felt secure in their safety for this week. James even remembered that he made a deal with Vanessa a few weeks ago in which she promised to not put him and a person of his choosing up on the block if it was before the final seven. James debated whether or not to bring this up with Vanessa before the nomination ceremony, and after talking it out with Meg, it seemed as though he decided not to make Vanessa make good on her promise for fear that it would put the two of them on her radar.

Well, I hate to break it to you, Jamesy boy, but you two were on Vanessa's radar. Why would you not cash in a potential Get Out of Jail Free card? Sure, it's possible Vanessa would have found a way to go back on her word, but you could have at least tried. Now you have to majorly pay for such a gaffe by both being on the block this week. Why'd you do that, James? Why?

To make matters worse, James and Meg don't even seem to have the support of Austwins since they learned from Vanessa that the pair would have easily gone after that trio. If there's anything that Vanessa knows as a poker player, it's that three-of-a-kind always beats a pair. James and Meg better have another card up their sleeve to save them this week. They're really going to need it.