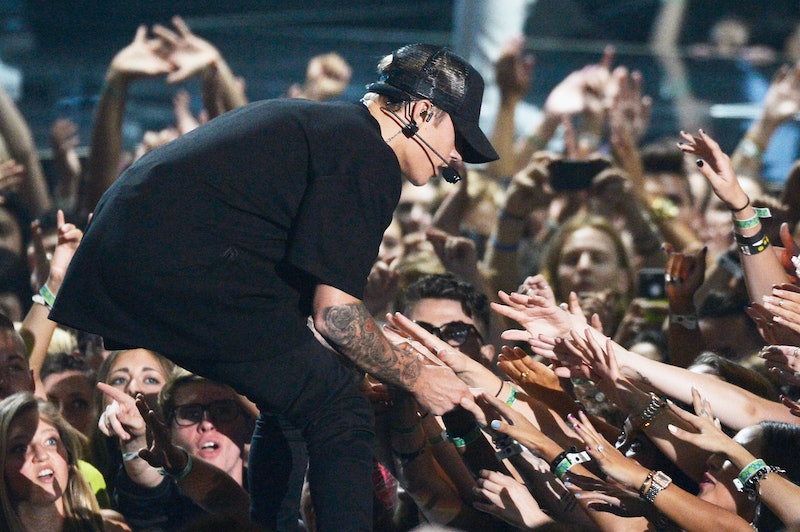 I'm going to make a confession. When Justin Bieber first exploded onto the scene with the music video for "One Time," my friends listened to it once for kicks and then laughed about it afterwards. But me? I was obsessed. Every second of every day, I was either watching the music video or singing the song incessantly. Even now, I can finish any lyric from any song off Justin Bieber's My World 2.0. This used to be something that I would declare with pride, but that cute little boy with the shaggy haircut has put me through a lot since 2010, so much that I swore I would never listen to his stupid music again. Then, after Justin Bieber performed at the 2015 VMAs and, what's more, burst into tears following his performance and a monologue that gave me chills, I found myself in an awkward position Sunday night. To Beliebe or not to Beliebe?

I was probably the most vocally dubious of Bieber going into this performance and, indeed, going into life. Oh, is Justin Bieber apologizing to the world on Ellen DeGeneres? And on the Comedy Central Roast? And on Ellen DeGeneres again? Yawn. Where have I seen that before? Oh, yes, Bieber has plied us with apologies and promises to change his wily, illegal ways in the past, and these apologies were almost always followed by yet another scandal or brush with the law or just plain "bad boy" behavior. An "I'm sorry" from Bieber meant nothing to me, except that he was sorry for his last terrible deed and was keeping more apologies in reserve for his next terrible deed.

I would love to say that I was one of those Beliebers who stuck with the pop star through thick and thin, through court date after court date, through egging a neighbor's house and through getting noise complaints for his constant condo parties, through his on-off relationship with Selena Gomez and passive aggressive Instagram posts — actually, no, I wouldn't love to say that — but it was not until Sunday night at the MTV VMAs that I respected Justin Bieber again. You know why? Because Justin Bieber did not deserve my respect. He made mistakes. He became someone who was far from being a role model, someone who was far from the kind of person that anyone should be looking up to, someone who made it impossible to focus on his music because his personal life was marked with such troubled behavior. And, worse, he rendered his own apologies and promises to change meaningless by making too many of them without backing them up.

But, at the 2015 VMAs, Bieber not only showed humility, but he also showed sincerity. I've been following his Apology Tour from start to finish. I've been keeping an eye on his behavior. (It's kind of my job, but, at my core, the early Belieber in me may have been hoping to see that shaggy-haired little boy again.) And never before have I been more struck by what a mature and talented artist Justin Bieber is — not since 2010, anyway.

"What Do You Mean" is an amazing single, a return to form for Bieber, and his performance at the VMAs, followed, as it was, by a heartwarming monologue and emotional display, was enough to shame the last of the doubters who refused to get back on the Bieber train without adequate proof that this ride would be a lot less bumpy. At least, it was enough to convince me.

So now we must ask ourselves critically: is it OK to like Justin Bieber again? Is it OK to join his undying fan base who have stood by him through thick and thin, through his high points and his incredibly low points, who have supported him even when he, realistically speaking, did not earn that support? Is it OK to walk forward as a Belieber and wear the moniker with pride despite the fact that the fandom's titular idol has the kind of checkered past that makes it kind of hard to explain why you love him to other people? I'm going to go ahead and say yes, absolutely, it's definitely OK. Second chances are hard to get in public opinion, let alone sixteenth chances. But Bieber's behavior has rarely delved into the territory of no return, and, if he remains as sincere about his apology and making a change as his VMAs performance implied, then it's time to start believing (beliebing?) again.

Congratulations, Justin Bieber. Now that's what I call one hell of a comeback.

More like this
Justin Bieber Just Added Another Date To His UK Tour
By Sophie McEvoy
Selena Gomez Reacts To TikTok Users Who Say She Shaded Hailey Bieber
By Grace Wehniainen
Britney Spears Met The Weeknd & Sam Levinson, So She May Actually Be On 'The Idol'
By Jake Viswanath
Kim Kardashian Reacts To Kanye West’s Diss Song “Eazy” On 'The Kardashians'
By Jake Viswanath
Get Even More From Bustle — Sign Up For The Newsletter