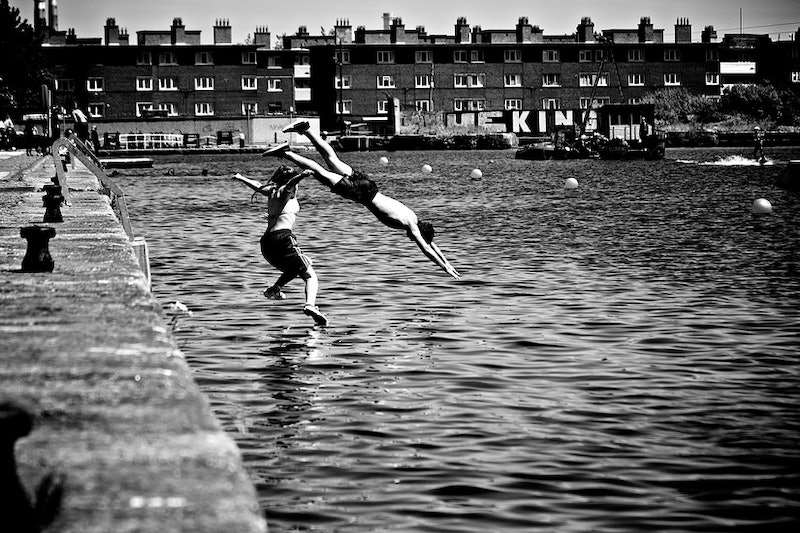 You should always be open to trying new things. I mean, you have to draw the line somewhere. Like meth. That seems like a good place for a line. Don't try meth. But other, more reasonable things, should be tried. Like eating chicken feet at yum cha. Or paragliding when you're at an exotic mountain location. Or karaoke, if what you've never done before is karaoke. The reason for this: you never really know until you try. Ergo, you shouldn't be afraid to try new things, when new things are presented to you.

Once, everything you do was new. School. Work. Sex. Braiding hair. There was a time when even the most banal, every day things, had never been done before. But you started doing them, and isn't your life that much better now that you know to crumble cookies over your ice cream? The same goes for all manner of things that might seem scary at first, from getting a bikini wax to being in a potentially awkward social situation to trying new food. You might find your new cookies on ice cream. Who knows? Here's why you should never be afraid to try new things, or at least why you should suck it up and try them even if you are a bit scared:

1. Because You Don't Want To Live With Regrets

Have you ever been presented with something new and daunting and said no, only to walk away wishing you had've said yes? I certainly have. It's especially awful to watch other people gleefully doing/excelling at something you were too afraid to try, because it gives you the distinct sense that you've completed failed yourself by being a scaredy cat. The best way to not regret the things you didn't do is to do them.

You might not like the new thing after you try it, but that just means you've ticked one more thing of the list — and if it ever comes around again, you can be decisive in saying no because you already tried it and it didn't work for you. And if you do like the new thing you've tried, well, then you've opened yourself up to a whole new world of wonder. But you'll never know if you never try.

3. Because It Will Give You Self Confidence

There's something really rewarding about trying something new. Even if you fail at it, or don't like it, it doesn't matter. Being bold and trying will instill you with a sense of self. Because whatever it is you're trying, you'll survive. You'll come out more seasoned, and with more experience. Those things will make you feel empowered, like a person who isn't afraid, and who achieves, even in the smallest of victories.

4. Because You'll Be More Interesting

Has anyone in the history of the world ever had a conversation with someone who has tried nothing, only eats white bread, and is fearful of change, and walked away and said, "Wow, what a very well rounded and interesting person"? I'm thinking probably not. The more things you try, the more things you know about, and the more dynamic you'll become both for yourself, and in socializing too.

I hate YOLO, but also, YOLO. When something new isn't life threatening, then what have you got to lose? There's really only room to grow and gain, and considering you only get one shot at this, you might as well make the most of it.

6. Because No One Ever Accomplished Anything By Letting Their Fear Conquer Them

Do you think Beyoncé lets the things that scare her control her? Absolutely not. Nothing can be accomplished when you're constantly cowering away from life and new challenges. Try more things and be more open to different things in order to succeed at living a full and fun life. Don't let "no" and "I can't" define your existence. Embrace new things with open arms and positivity, because you never know where a scary-seeming task might lead you. It could be somewhere awesome!