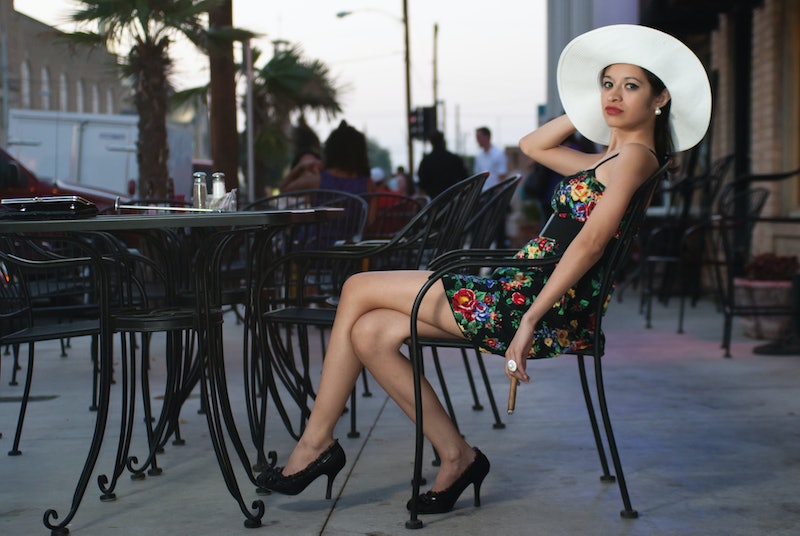 An epidemic is sweeping the nation, and it's called Fear of Missing Out (FOMO). And one of the things we fear missing out on most is the company of other people. People also feel self-conscious about being perceived as loners when out and about without any companions. Yet when we're constantly around other people, we miss some valuable bonding time with ourselves. And one recent study shows that, contrary to our expectations, people who spend time with others don't have any more fun than those doing the same activities alone.

The researchers surveyed people in the U.S., China, and India, and found that most feel okay about solitary "utilitarian" activities in public, like doing work in a coffee shop; however, they squirmed a bit at the thought of going to a "hedonic" place like a party or a bar by themselves, especially when large numbers of people would be observing them. Yet in another experiment, when people were told to check out an art gallery after rating how much fun they expected to have there, people in groups expected a better experience but reported the same amount of enjoyment as people who showed up alone.

In case you didn't catch that, I repeat: You will not be missing out if you go out by yourself. Quite the contrary: the authors of the study conclude that "consumers who forego hedonic activities alone are missing out on opportunities for rewarding experiences.” This fact opens up an endless world of possibilities for activities to partake in with or without your friends' approval.

There are so many narratives in pop culture about people going to bars to pick one another up, yet how many people have actually sat down by themselves to indicate their availability? I decided to jump over this hurdle when I was 23 and living in Manhattan and didn't want my friends' laziness to stop me from having a fun Friday night out. I sat down at a local bar, ordered a drink, and struggled against the urge to look down at my phone and pretend I was meeting someone for ten minutes before someone started talking to me. It wasn't a pickup scenario; it was something much better: a conversation about my fellow solo drinker's experience as a teacher and why he thinks our country's education system is broken and his book about someone who professionally murders people who are too scared to commit suicide (I can't make this up).

After this experience, I started arriving early to bars before meeting my friends, excited about all the other characters (if nobody else, the bartender) I'd have the chance to meet. Sure, sometimes everyone else is already in good company and you feel like a total outcast, but that's where smartphones come in handy.

I know what you're thinking: "You've just told me to go sit down by myself with a bunch of judgmental faces starting at me, and now you're telling me to sing a solo by myself??" Yes, I am. But hey, that's where Katherine Heigl met her soul mate in 27 Dresses! And if you find the right karaoke bar, there will be a supportive group of people there to cheer you on and sing along with you. I've met a ton of people at karaoke bars because the venue offers a natural ice breaker: "What song are you going to sing?" or "I enjoyed your performance!" (And trust me, nobody has terribly high standards for how much they'll actually enjoy your performance.)

Company doesn't really enhance the movie-going experience when you can't talk without being shushed by the old lady in front of you. (The best one I've gotten: "One question: Are you on a date? Great, one more question: Could you shut the f--- up?"). Going to a movie with someone else presents a paradox: You don't want to be that annoying person filling the theater with your not-so-subtle whispers, but you also don't want to waste the time your movie-going partner has allotted to you. You can exert the discipline to keep quiet and discuss the film afterward, or you can just go on your own and do something more conducive to conversation when you're with friends or dates.

In this situation, you're not really alone. You're surrounding by people obsessed with the same band as you. I go to most concerts with others but save my favorite bands for solo outings because I know I'll want to focus on the music and be available to meet fellow fans. And nobody wants to be that person jumping around and screaming lyrics while someone who's not really into it awkwardly sways next to them.

However, I will say that seeing a band with an equally obsessed friend can create an even more memorable experience. In this scenario, a concert can be a good first date because it gives you something to bond over. (though, dear lord, do not have a first date at the movies. You will either become the enemy of everyone else in the theater or literally know nothing about each other by the end.)

This activity requires no social skills on your part. You just sit down, listen to questions, fill out answers on a sheet of paper, and hopefully learn some new things. You can also ask to join someone else's team, and some bars pair up people who come alone or in small groups. You never know what you'll learn or who you might learn from: Once, I went alone to bar trivia on an art-themed night, got paired up with an archivist at the Metropolitan Museum of Art, and won free drinks! Keep your eye out for these themed trivia nights: There's one for everything from Harry Potter to dogs to ancient mythology to Broad City.

This option is especially fool-proof because it's proven by science to hold no more enjoyment with others than alone. Everyone wanders through museums at different paces, so catching up or slowing down can detract from the experience. Plus, museum visits can be inspirational if you bring a sketchpad, journal, or camera (museum rules permitting). Even if you're not an artist, you can jot down ideas that come to you as you're looking at the exhibits, whether they're about modern art, outer space, or ancient civilizations.

Meetup.com was created so that you could meet new people — so what is it with all these Meetup group members who bring people they already know? I can understand if you know someone who would love your book club discussions or game nights, but unless there's a specific reason like that, there's no shame in going alone to make new friends. That's what the website is for.

Sometimes other people are kind of a drag. Think about it: What do all your failed relationships have in common? That's right, other people.

If you want a companion who doesn't argue with you, offend you, or object to your preferred activity, you yourself are second to no one, except maybe your cat. So get out there and make friends — with yourself.