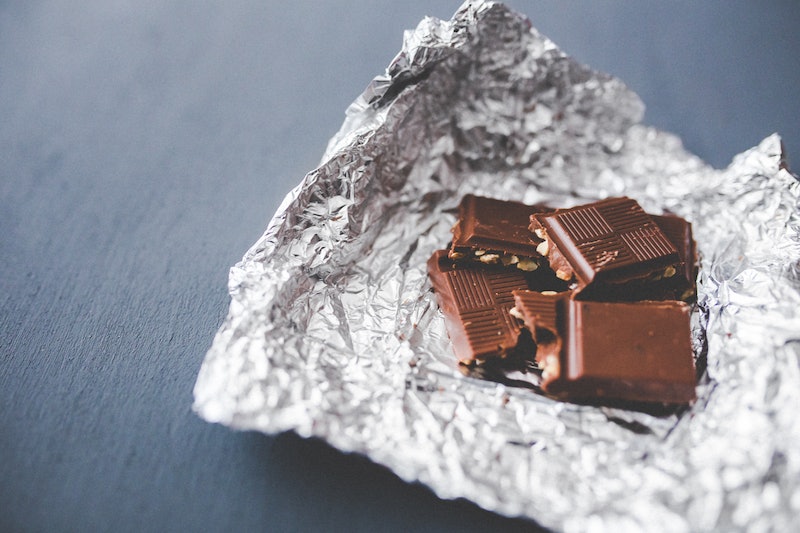 When I was a kid, a family friend would always say to me, "Everything is OK in moderation, including cocaine and boys." Though the advice just made me giggle at the time, asapSCIENCE's new video, "This Much Will Kill You," discusses just how important moderation truly is — because overdoing it on just about anything could actually kill you. You don't need to freak out about any of this or anything... but you might want to start paying more attention to what comes in contact with your system.

It's pretty common knowledge that substances such as mercury or cyanide can do you in, even if it's in small doses. Surprisingly, though, the rule of moderation doesn't just pertain to things that are bad for us; it also extends to things that we consider good for us. Never underestime the poison power of common, every day things like, say, vitamin C: When taken properly, vitamin C can boost your immunity, protect against cardiovascular disease, and alleviate harmful effects of stress — but when you take too much of it? It's definitely no good.

So: What, if consumed in excess, might kill you? And how much of it do you need to consume in what amount of time in order for it to be fatal? Getting to the bottom of these kinds of questions is exactly what asapSCIENCE's video does, so here — take a look. According to asapSCIENCE, you can overdose on these 12 things — if, that is, you're not careful.

Consuming 70 cups of coffee at once can trigger cardiac arrest, making it capable of killing a person who weighs around 150 pounds. Though it's unlikely that anyone has the money, time, or desire to put that much coffee into their body at once, maybe we should be mindful and stop making coffee drinking competitions a thing.

Though it will vary from body to body, the video says that 13 consecutive shots of alcohol could be lethal because eventually, the drug (let's not forget that alcohol is, in fact, a drug!) shuts down crucial functions in your body, like breathing and your heartbeat. You shouldn't be too worried about accidentally drinking so much alcohol you'll die, though, because your body has ways of letting you know when you're approaching your limit — throwing up being one of the most common.

It's true: Drinking too much water can kill you. Consuming around 25 cups at a time can lead to headaches, seizures, comas, and death. Water might be the ultimate force of life, but only if you drink a certain amount of it. Why must you be so complicated, Mother Nature?

Too much salt or your favorite seasoning can lead to hypernatremia, which causes cells to shrink, leading to seizures, comas, and, in some instances, death. This should also serve as a warning for us to stop being so salty towards each other.

Holding your breath for six minutes could result in death while shorter increments of time, like four or five minutes, can cause serious brain injury. Of course, some superhuman divers and swimmers have been known to defy nature and hold their breath for over 20 minutes... but unless you're a professional, I wouldn't recommend it.

It's not the delicious fruit that will kill you, per se; however, biting into a cherry pit or two can release the cyanide hiding inside. If you swallow one whole, though, there's not much cause for alarm (and no, a cherry tree will not grow inside your stomach).

At about 26,000 feet above sea level, our bodies can no longer adjust to the lack of oxygen and are likely to shut down. Those who want to climb Mt. Everest, which stands at a whopping 29,035 feet, should consider their mission accomplished about 3,000 feet short of the summit if they don't want to risk their lives.

Simply being too tall can put enough stress on your circulatory system and pressure on your bones to kill you. In fact, scientists say that every inch above five feet can decrease your life by 1.3 years. I'll take the eight years if it means not dying at the age of 22, like Robert Wadlow, who grew to be over eight feet until his body couldn't take it anymore.

Do you live quite literally to only eat chocolate whenever possible? I know I do — but anyone who's in this proverbial boat with me might want to avoid eating 85 full-sized chocolate bars in one sitting. Your body will not be able to metabolize the all that theobromine — the chemical in chocolate that can kill your dog. Best to indulge in moderation, so as to be able to keep indulging in moderation for a heck of a lot longer.

Have you ever heard someone try to argue that smoking marijuana can't kill you? Well, they're almost right, because even though it can, it takes absurdly large quantities to be lethal. You would have to eat 22,000 grams of the green stuff or smoke 680,000 grams of it in 15 minutes in order for it to kill you. Since just 28 grams can yield about 60 joints, you would have to be a super stoner weed for that to happen.

Neighbor's music too loud? Turns out, blasting sound over 185 decibals can create so much air pressure your lungs could literally burst, giving you a justifiable reason to ask them to turn it down. To put that number in perspective, though, a jet produces about 150 decibels of noise at takeoff, so chances are your neighbors' fondness for thrashing guitars won't actally harm you physically.

According to the video, studies have shown that rats can go up to two weeks before dying from sleep deprivation. Humans have made it to about 11 days, but don't try that at home because everyone's body is different and sleep is a good thing.

Check out the full vide below:

More like this
This Psychological Effect Might Be Keeping You From Hitting Your Goals
By Lexi Inks
10 Pumpkin Recipes That Are Way More Creative Than Pie & Lattes
By Rebecca Deczynski and Alexis Morillo
On TikTok, Tinned Fish Date Night Is The Latest Viral Food Obsession
By Emma Carey
Rachel Zegler Reveals She Had Breast Cancer Scare
By Radhika Menon
Get Even More From Bustle — Sign Up For The Newsletter