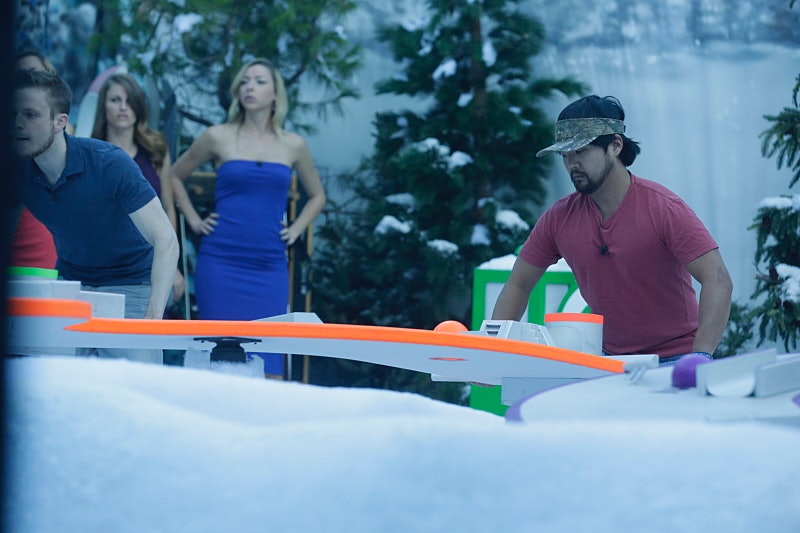 I don’t know what was more difficult for me to watch last Sunday night: Miley Cyrus cracking weed jokes in front of her father at the VMAs or Meg and James getting nominated for eviction on Big Brother 17. The race is a tight one, mainly because Cyrus seemed to have no shame about dropping the pot bomb every chance she got, and James and Meg are two of my favorite players in the house. Who doesn’t love sweet Meg and prankster James? They’re also the two remaining underdogs in a house otherwise run by Austin’s Angels, so you have to love them. Otherwise who do you have to root for? Vanessa? Austin? No, thank you. When Meg and James were nominated for eviction, I just about lost it. So imagine my surprise and delight when I learned Monday morning that — Spoiler Alert — James won the Power of Veto in the competition and is now in a position to save either himself or Meg from eviction. Because yes this is exactly what they needed, but oh my god what will he do with all of that power?

Well, if you watch the live feeds, then you know that James actually used the Veto to save himself. I guess chivalry is totally dead, because I totally thought he was going to use it to save Meg. After seeing the two of them beg Vanessa to put themselves up over the other one as a pawn I had a strong feeling that James would sacrifice the chance to save himself in order to save Meg. Wasn’t that the most beautiful moment ever, and didn’t it make you want them to be together forever because that’s totally true love? Well, too bad, because it was all for show. ‘Cause James turned around and got himself off the block, y’all, not his girl crush Meg.

Thankfully Meg was in on the whole thing. The two even joked about him using it on her to get a chance to sleep in the same bed, and she said she would kill him if did. So it looks like there's no love lost between them.

But, now that James is off the block, the bigger problem is who Vanessa chooses to nominate for eviction next to Meg. Here's where it gets interesting, because, even though everyone figured she'd go for John, she put up Julia of all people. It's likely that this move is just to put Julia up as a pawn, but it might also be a move from Vanessa to show that she's really sticking with this side alliance she has with Steve and John. With the Austwins in serious danger of being broken up, this could cause a total realignment in the house.

Either way, winning the Power of Veto was the best thing to happen to Meg and James this week. It was their one chance of saving themselves from eviction and it broke apart one of the biggest alliances in the house. Way to level the playing field, Jamesy!