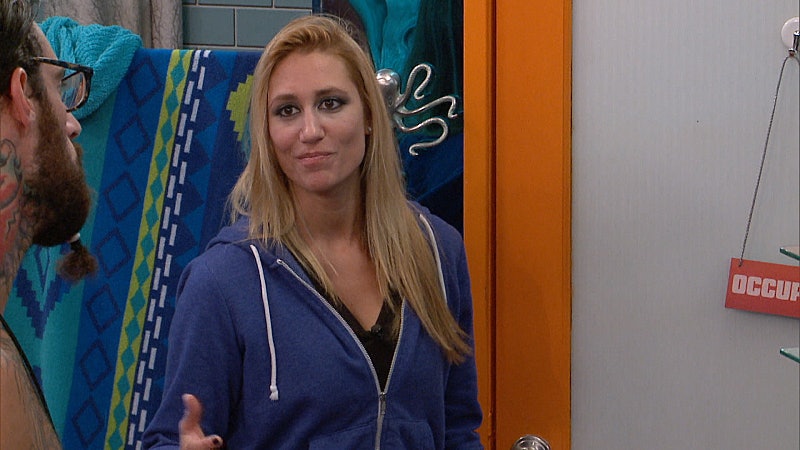 There are a lot of rules in Big Brother. Houseguests can't have any contact with the outside world, always have to wear their microphone, can't sing real music, can't talk about any behind-the-scenes action, and more — those are just the big ones. Another rule is that houseguests are not allowed to bring any books into the house except for two: Religious text and the Big Brother rule book. The latter features instructions on how the POV ceremony works, what houseguests are allowed to add to slop to make it taste better, and what they are allowed to wear (no logos). Vanessa should probably give it another read soon, and see if offering to split Big Brother prize money with other houseguests is allowed, or if she can expect to be disqualified.

Although the rule book is not open for public reading, it's likely that there is a passage that mentions what houesguests are allowed to offer other houseguests in exchange for their allegiance. Houseguests can offer them a deal for safety, they can promise to throw a comp, or anything that could benefit someone's game. What is probably not allowed according to the Big Brother rule book is offering other houseguests a cut of the final $500,000 prize that is awarded to the winner of every season.

Vanessa has been trying to offer chunks of the final prize (assuming she wins it) to other houseguests in exchange for their loyalty. Vanessa's wealth from poker suggests that she doesn't need to rely on the final prize, and may not be playing just for the money. The cash is nice, but Vanessa is playing Big Brother for the title of "Winner of Big Brother 17", and she's doing whatever she can to get there. Vanessa has been spending a lot of time reading the rule book, and it appears her plan was to attempt to find a loophole in the show's guidelines that would allow her to bribe the other houseguests.

Vanessa began to suggest to the other houseguests that she could possibly purchase gifts for them, or sponsor them at poker tournaments. Her most recent attempt at bribery was offering Julia $10,000 to go on the block as a pawn. However, according to an alleged Big Brother contract posted by Reality Blurred, the following actions are not allowed.

I am aware that it is a federal offense punishable by fine and/or imprisonment for me or anyone to do anything that would rig or in any way influence the outcome of the Series with intent to deceive the viewing public (including, without limitation, colluding to share any prizes, stipends or other monies), and that it is a federal offense to accept any information or special or secret assistance in connection with the Series. I agree that I will not participate in any such act or any other deceptive or dishonest act with respect to the Series. I acknowledge and agree that any agreement between me and any other participant(s) to share the Prize, if awarded to me or such other participant(s), shall constitute a deceptive or dishonest act hereunder.

If Vanessa signed a contract like this that makes it pretty clear that any kind of prize-sharing will not be tolerated in the Big Brother house, she may be in trouble. The same thing happened in Big Brother 11, when contestants on the live feeds talked about sharing the prize money, but Big Brother stopped them. Luckily, it seems that Big Brother was also able to put a stop to Vanessa's antics before she made any more promises.

Vanessa may be desperate enough to go back into the rule book and try to find another loophole, but it seems that Big Brother has its eye on Vanessa's antics. Hopefully, instead of trying to find any possible way to keep blood off her hands, she'll finally start making some big moves.