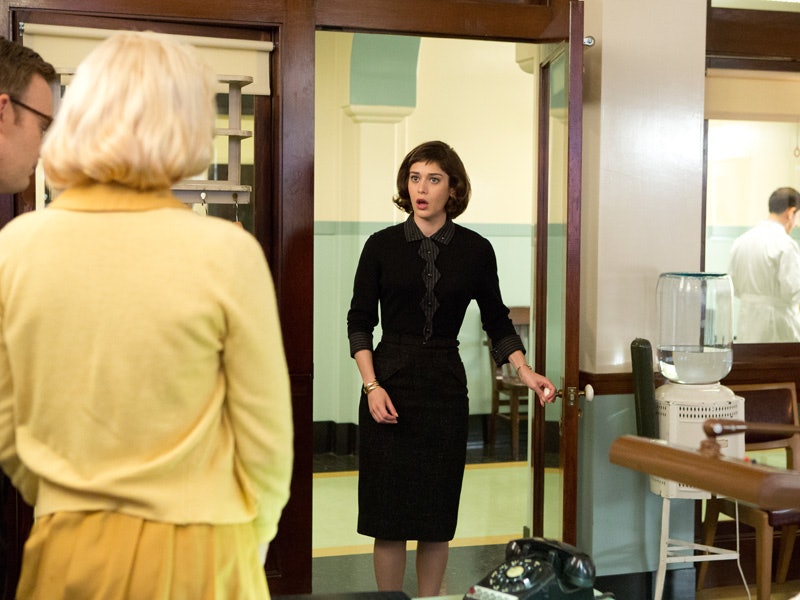 When the Masters of Sex season finale opens, Ethan Haas and Virginia Johnson seem to be blissful. Ethan has a great job lead at UCLA, and the kids like him. Masters, meanwhile, is busy being married to his work. But are things truly happy for the pair? Is Bill Masters' heart really a heart of glass? Will the world be in awe of all the research about sex Masters and Johnson have discovered?

Time to discuss these points by asking the week's most pressing questions:

Libby and Masters wake up: "It's a big day!" And, a while later, the scene cuts to Henry on Virginia's couch watching a man go into space as a voice on the TV says, "It's quite a day." In case you were wondering, this is a big deal day. At least you know this won't be the last episode — Season 2 has already been ordered.

Do women ever get to choose?

Margaret Scully reads a story in the newspaper about Charles Albert Rutledge, a man who gets a life sentence for having sex with a teenage boy. (Fact: The article surrounds a true story.) Says Margaret to Provost Scully, "But today I thought, 'God. That could be my husband.'"

"I am so ashamed that all this time I could never stop," he says. And reveals that the only man he ever loved he met the summer before college when he was 18 — before he had met Margaret.

"You cannot give me back the years I could have done something else… why wasn't that my choice?" she says. "Those were the only years I had, you thief!"

Scully goes to a doctor to fix his "problem," but, in the end, Margaret feels awful about the thought of electroshock therapy or hooking shocks to his penis or one of the other homosexuality "cures."

Masters is eager to please with his study findings, determining that the size of a man's penis does not determine sexual satisfaction. His study, though fails to mention other factors to take into account.

Masters brushes off Virginia's contributions. Then, he shows some videos. There's one showing the vaginal canal and the female orgasm. There's also the external parts of Virginia, though her face is cut out this time. Halfway through the video, the Chancellor turns off the projector and there's a revolt and all the doctors scheduled to come to the Masters' place after cancel. Poor Libby and her opened champagne.

How do you walk out of work in style?

There's a petition to shut down Bill Masters' study. And a doctor is totally creepy to Virginia about having seen too much of her. In the end, Masters saves Scully from getting the boot, but not only is the Study over for a bit, Masters has definitely been canned.

After Scully and Masters have drinks, Masters goes back to his office. His locks have been changed. And there's a policeman waiting. "I certainly wouldn't want to escort you out." So he does the only thing he can do while walking out: He throws a fire extinguisher through a window.

What are your dreams, Virginia Johnson?

Peter Haas gets a job offer from UCLA and calls from L.A. while staring out at the Pacific. It's raining outside where she is. It's perfect and bright and sunny where he is. "But whatever kind of life you want for yourself, your kids, it's yours," he says. So… ?

Lester the film guy to Jane: "I think your vaginal walls are beautiful… I think the up top parts are beautiful too." That's how to win over a girl.

Do you know where your husband is? How about when you go into labor?

Libby is donating some canned goods when she goes into labor! She calls Masters, but he isn't there to pick up the call. The woman picking up the canned goods, who happens to be African-American, drives her to a predominantly black hospital closer by. Giving birth was successful! Deadbeat husband still not around!

And… Masters arrives at Virginia's door. "You put my name on the study," she says.

"You earned it. Nobody believes in the work. It doesn't matter because it's over… So, I have nothing to offer you except maybe the truth. I finally realized that there is one thing that I can't live without and it's you. You."

Aside from the fact that Masters should be with his wife and baby, it's disappointing to see what could have potentially been an interesting, unconventional character portrait fall down the chute of melodrama. To show a man in love with his work, first and foremost. That the work, being the one thing he can't live without. Not the love of a woman. That would have been something refreshing.