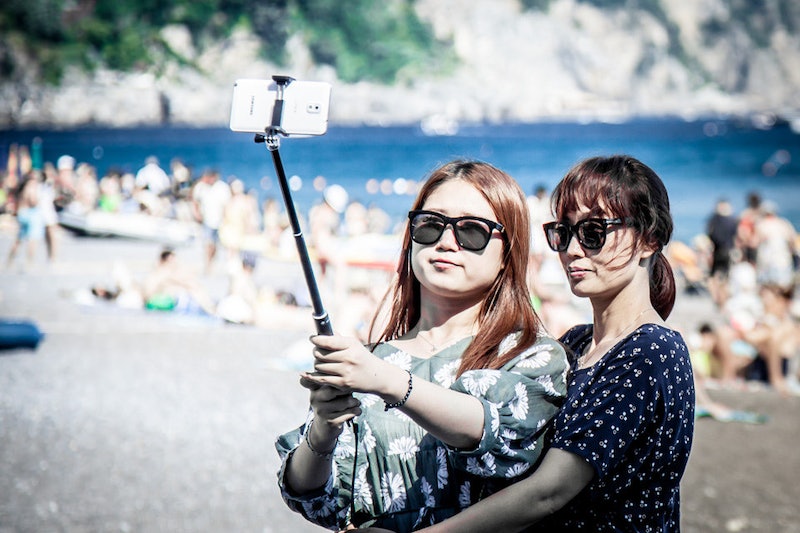 As someone with exceptionally stubby arms, "selfies" are a contentious subject for me. It's extremely hard to find your light and give your best angle when you can barely reach your phone past your face — but I also find selfie sticks thoroughly embarrassing and therefore refuse to use them. What's a would-be selfie-taker to do? Luckily, it looks like my trials and tribulations may soon be over, now that Australia's selfie app GiGA is here. It's totally changing the game — and letting us ditch those selfie sticks once and for all.

GiGA was created by Tourism Australia as a way to fit not only faces into the frame, but some seriously stunning scenery as well. The set-up is fairly simple: Selfie enthusiasts stand on a GiGA-certified platform, and upon taking a photo with the GiGA app, also trigger a camera 111 meters (about 364 feet) away. The long-distance photo is then emailed to each photo-taker, at which point they can zoom in however much or as little as they want. They can even post their photo as a small clip that zooms in and out to show the full magnitude of their surroundings, like so:

You guys. How cool is that?

GiGA will be released as part of the "There's Nothing Like Australia" campaign, with plans to place GiGA platforms at major landmarks throughout the country.

The inspiration for the app came from a somewhat unlikely source. After discovering that Australia's sixth largest group of tourists came from Japan, and that this group's favorite form of photography was the selfie, Tourism Australia set to work devising an app. The idea was for it cater to this new round of Australian visitors while simultaneously cutting out the need for the ever-controversial selfie stick (because let's face it: There's a reason selfie sticks have been banned in so many places). Here's hoping this technology makes its way over here so I can finally "find my light," so to speak.

Check out the demo video below. Neat, isn't it?