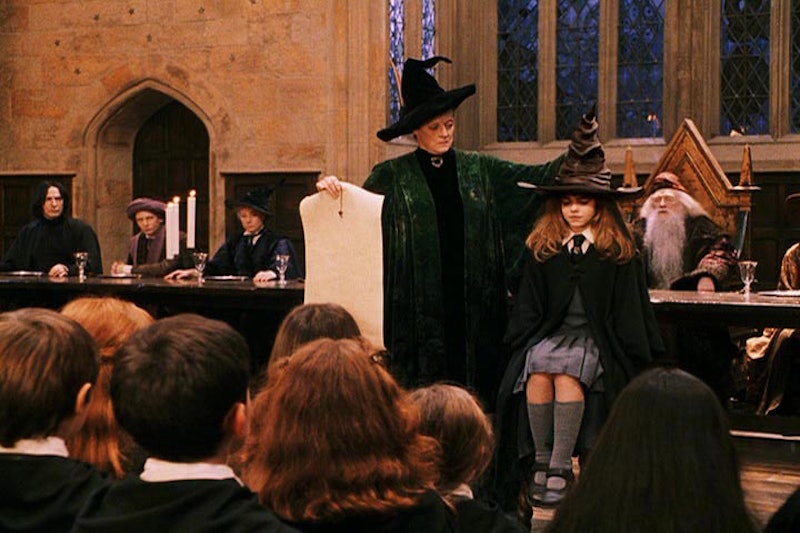 On Tuesday morning, beloved author J.K. Rowling announced that it was James Sirius Potter's first day at Hogwarts and asked fans at King's Cross Station to wish him well. Now, after several fans — including myself — asked which house the Sorting Hat would choose for Harry and Ginny's firstborn, Rowling has made it official. James Sirius Potter is ... a Gryffindor!

Rowling's second tweet also included details about Teddy Lupin, the son of Remus Lupin and Nymphadora Tonks, who was orphaned as an infant when his parents died at the Battle of Hogwarts. Many fans have latched onto Teddy, despite his being only a very minor character. That's really no surprise, since having another of the Marauders leave behind a son "bring[s] the orphan story full circle."

When we see Teddy in the Harry Potter and the Deathly Hallows epilogue, he's making out with Victoire — daughter of Bill and Fleur — on the Express. That's in 2017, however, after Teddy has finished his tenure at Hogwarts.

So what's Teddy up to now? Aw, nothing much. Just being a Hufflepuff. Oh right, and Head Boy. That's right, folks. Teddy Lupin got his mother's house and his father's prefect status, and became the Head Boy for Hogwarts' 2015-16 school year.

Potterheads were excited to find out what the Sorting Hat had in store for James Sirius, but Rowling's added announcement regarding Teddy was a welcomed treat. Here are some of the best tweets in response to the news.