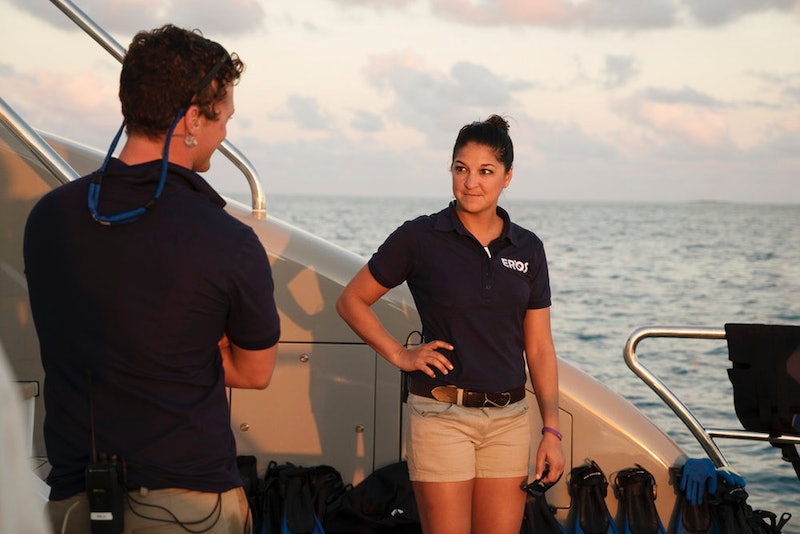 I really thought Tuesday night's episode of Below Deck was going to begin with some terrible news for Rocky and Emile after the stunt they pulled, hanging out on the mast near the yacht's radars in the Season 3 premiere of the show. However, it was the quietest cast member Connie, of all people, who received some very bad and very serious news at the top of Episode 2 of Below Deck this season. Still, she handled it probably the best way that she could when stuck at sea miles away from home and having to grieve in front of millions of people watching at home.

Surprisingly, Connie didn't do much grieving when she received the text from her brother that her father had passed away of a heart attack. That's because Connie hadn't spoken to her father for 12 years and really didn't have a relationship with him.

Connie said her father was not a positive influence on her life. It was quite the opposite, actually. She said her dad took drugs, drank, and would have such erratic behavior that her mother would do whatever it took to keep her children away from him.

Because of that, Connie wasn't going to rush off the boat to fly home and attend her father's funeral. She said she would only leave if her brother needed her there to console him since she was something of a father figure to him as they grew up.

Connie has been the most reserved and introverted of the crew members on Below Deck so far, and as such, she decided to keep her bad news to herself initially. She finally opened up to Eddie, Captain Lee, and Emile, but she delivered the news with such a straight face, even cracking a bit of a smirk here and there, that you would hardly know that she just received such heartbreaking news. Emile in particular didn't really understand how Connie could seem like she was not bothered by what just happened to her, but she just said that you have to have lived her life to get how she felt in that situation, which, after hearing about the strained relationship Connie had with her dad, definitely seems to be an accurate assessment.

I admire Connie's professionalism in handling a devastating situation like this the way that she did. Connie remained focused on the task at hand, determined to finish the charter with the high-quality service the guests expect, and that's kind of what you have to do when you're in yachting. Connie may have come off as cold and heartless in this episode to some, but as she said, if you were in her shoes, you would understand why she handled her grief in the way that she did.

Connie may have had a rough past, but she's focused on the future, trying to make every charter that she's a part of the best it can be and being confident in herself that she turned out to be an upstanding human being even without growing up with a father. From what I've seen on Below Deck so far, I definitely agree with that.