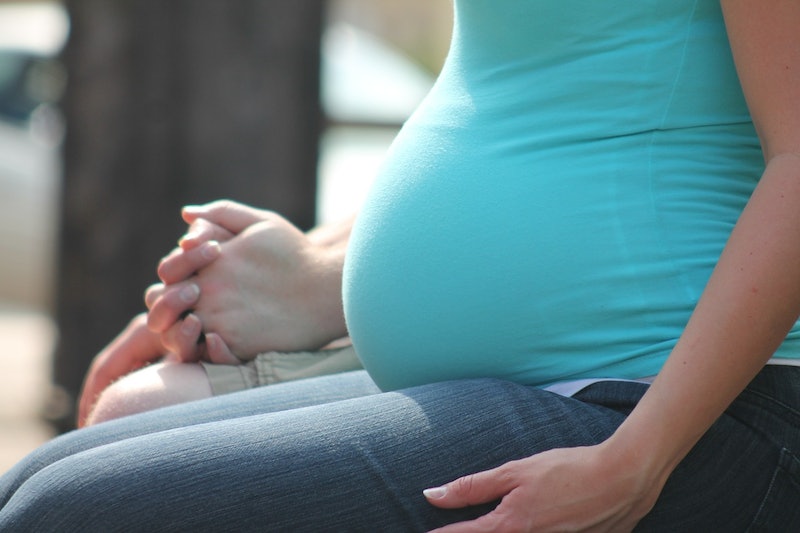 An unnamed 16-year-old girl in Michigan is making headlines for faking a pregnancy with the help of products from a website called “FakeaBaby.com.” The teenager pretended to be pregnant with triplets for 10 months, according to Fox 2 Detroit, fooling her boyfriend, family, and friends before the ruse finally unraveled. There’s so much about this story that’s shocking: That someone would attempt to fake a pregnancy; that she would get away with it for so long; that FakeaBaby.com is an actual thing that exists that apparently sells pregnancy-faking products to real people… It’s really that last bit that’s blowing my mind right now.

In an interview with Fox 2 Detroit, 16-year-old Jordan Wyrabkiewicz explains how he felt when he found out that his girlfriend, also 16, was pregnant, saying, "I was excited, don't get me wrong, but I was scared. … I started looking for jobs the best I could. I was ready to donate all my time." His mother, Krissy Wyrabkiewicz, commented, "I was happy — eventually — but not in the beginning. I mean, that's my son.” The couples’ friends and family started to help them prepare for their new babies and threw a baby shower for the soon-to-be mother in May. She also received financial support from a number of sources, including a local church, a nonprofit, and a Facebook group called “Moms of Triplets” that the teen girl had joined.

Fox 2 Detroit reports that no one suspected that the pregnancy was a lie for a long time. The teen had ultrasound images of her supposed babies, and her belly appeared to grow as she got further along in the pregnancy. Her story began to fall apart when she had reached what should have been full term and no babies appeared. Jordan says she justified the fact that she hadn’t given birth after 10 months by giving him “the story about micro preemies and how her doctor thought time would be better in there than time in the incubator." His mother claims that she also grew suspicious when she couldn’t find the expectant mother’s doctor. Eventually a member of the “Moms of Triplets” Facebook group realized that the teen’s ultrasound pictures were fake and told the family; they then discovered that this images matched fake ultrasounds sold on FakeaBaby.com.

Obviously, the teen couldn’t pretend to be pregnant forever. The day before she said she was scheduled to have a C-section, she said she had a miscarriage. When she refused to go the hospital (Did she not realize that a woman losing triplets at full term would be a traumatic physical event?), Jordan’s aunt, Jessica Adams, called the authorities She told Fox 2 Detroit,

So, I told the hotline she has three babies that she's supposed to be full term with, and she won't go to the hospital and they don't have heartbeats. So, they sent detectives over there and she finally cracked and told the detectives that she lost them at six weeks.

The girl’s brother has since confirmed that his sister lied, telling the news station, "She lost the baby at six weeks. She didn't tell anybody; she was scared and didn't know what to do. All donations she took are being returned."

The case is currently under investigation; because the teen girl accepted thousands of dollars of donations, there is a possibility that her actions may have been criminal. The local police are also trying to ascertain whether her parents were involved in the lie. Watch Fox 2 Detroit's report below:

One of the most bizarre and upsetting aspects of this case is that the teen used FakeaBaby.com — and the fact that this website exists at all. According to the website, the products sold by FakeaBaby.com, which range from fake pregnancy and DNA tests to fake ultrasound images to fake pregnancy bellies, are meant as “gag gifts.” Of course, pranking someone by telling him or her that you’re pregnant seems like the worst, least funny gag ever, a fact that the website seems to indirectly acknowledge in a banner that runs across the homepage that reads, “Why make em laugh when you can make em cry!” Hahaha, HILARIOUS, right?

The product pages for the items sold on FakeaBaby.com come with a disclaimer, cautioning people against using them for nefarious purposes. It says, in part,

Like almost any item in existence, this product may be used for fun or for evil, depending solely on the intentions of the user. It is designed as a novelty/gag device.

OK, but I think most of us can agree most “item[s] in existence” don’t falsely imply that someone is pregnant, right? I mean, my toaster would never, ever do that.

The note goes on:

I literally cannot imagine a situation in which anyone — “evolved” or not — would find it funny to get a fake pregnancy test. And certainly in this case — which involved ten months of baby-faking hijinks — no one seems to be laughing.