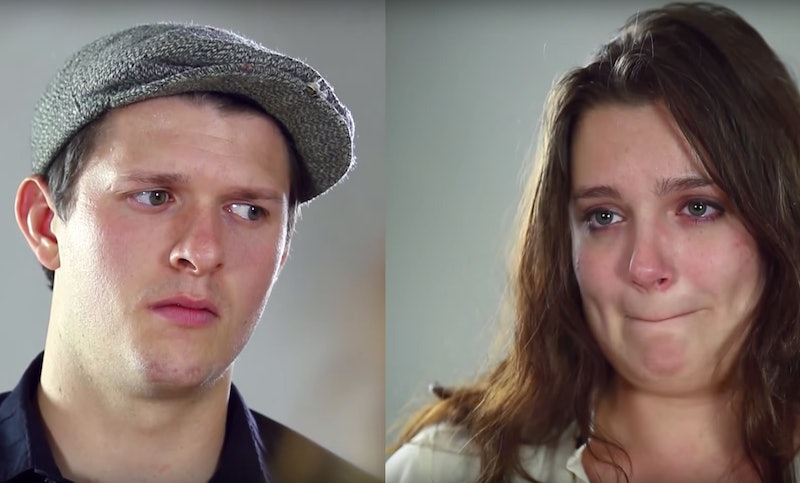 After a particularly painful breakup, we've all fantasized about the chance to get our ex in the same room and grill them about what happened. For most people, it remains a daydream. But recently, that particular fantasy became reality for one former couple, when exes Ali and Andrew confronted each other on camera in two videos as part of The And project. As with most dreams, though, the reality may not have been what they were expecting.

Ali and Andrew met in college, where they hit it off so well that they ended up dating for seven years. Any breakup after such a long relationship isn't easy, and when the two met up again two years later, it was clear that it often leaves more questions than answers. That's where The And comes in. A collaboration between marketing agency Noise, The Skin Deep, and director Topaz Adizes, The And is an interactive documentary in which couples ask each other difficult questions. With Ali and Andrew, those questions got really real, really fast.

Ali opens the first video by asking the question many have wondered at the end of a relationship: "Why did you cheat on me so many times?" Anyone who has been cheated on knows how the thought rattles around in your head for months, or even years, afterward. Were they unhappy? How could they do that to me? Is it somehow my fault?

Unsurprisingly, Andrew is taken aback by Ali's bluntness, although he quickly recovers. "I did not cheat on you 'so many times,'" he haltingly replies. "I did not ... do the act of cheating."

He went on to protest that the wording makes him sound like a "sex addict or something," but eventually, he admits that he had oral sex with another girl. As for the answer to her question?

"I was interested in other options," he says. When she asks why he didn't just break up with her first, he claims that he did. Well, kind of. "That night that it all kind of first started, we didn't do anything. We talked," he says. "Then, two weeks later, I broke up with you because I felt like I had been dishonest."

Unsurprisingly, Ali starts to cry during this discussion, and you can literally feel your heart breaking.

The next few questions, though, change gears completely. The couple discusses when they first met, what made their time together so special, and and their fondest memories as a couple. Later, Ali says that she blamed Andrew for most of their problems, but she "wasn't perfect" either.

As difficult as the first few minutes of the video are, the second half is proof that a painful breakup doesn't negate the good times they had together. In fact, when asked what she would change about their relationship, Ali replies that she wouldn't change anything.

"We grew up together, you know? I wouldn't be the person I am today, and we wouldn't have the relationship that we do now, if it were any different," she says.

Like many in The And series, Ali and Andrew's videos are intensely emotional, but they showcase the hard truth about relationships: As much as we would like to turn them into black-and-white, neatly-resolved plotlines in our lives, loving someone is rarely clean-cut. The bad times don't erase the good, and the good times don't erase the bad. Whether one outweighs the other is up to the people in the relationship.

Check out Part 1 and 2 below, and head over to The And' s website to see more from the documentary.