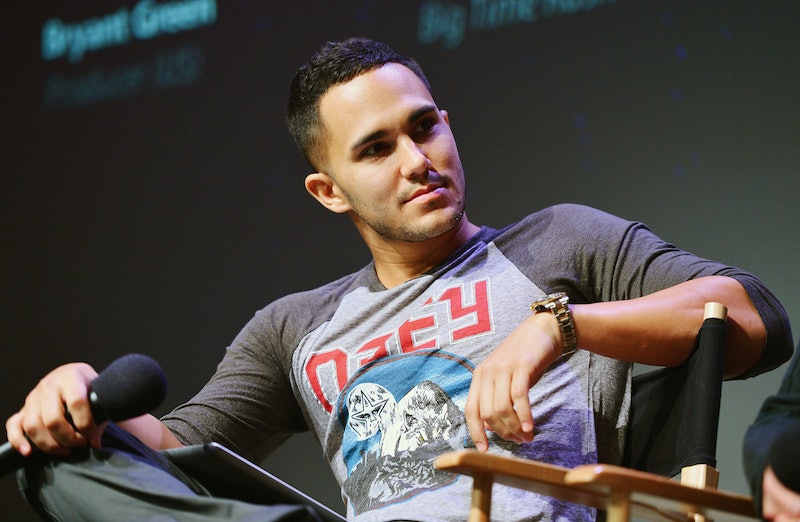 For the first time ever a married couple will compete against each other on Dancing With the Stars. Season 21 of Dancing With the Stars , will feature Carlos PenaVega and his wife actress Alexa PenaVega, formerly known as Alexa Vega. Carlos, who you may know as Carlos Pena Jr., isn't a household name — unless you or someone you love is a Nickelodeon fan. If that's the case, you're already well acquainted with the cute 26-year-old actor, who played Carlos Garcia on Big Time Rush, a show about a boy band that actually became a real-life boy band and was eventually signed to Columbia Records.

Since finding success with BTR in 2009 and releasing three albums, Big Time Rush has taken a break from performing to focus on their individual careers and lives. For Carlos, that means marrying Alexa in Mexico and slipping on his dancing shoes to partner with Witney Carson on DWTS. While putting in the grueling rehearsal time needed to perfect his performances, he'll also get to cheer on (and compete against) his wife, who is hooking up with pro-dancer Mark Ballas to crush her husband and other DWTS competitors who include Paula Deen, Bindi Irwin, and the original boy band heartthrob, Nick Carter.

While his lovely wife has garnered a lot of attention, viewers will be surprised to learn that Carlos is just as accomplished in his career and is a pretty interesting cat. Here are seven facts about the new DWTS cast member.

He Changed His Name After He Got Married

Call him a feminist or just call him thoughtful. When Carlos married Alexa in 2014, both celebs agreed to change their last names to PenaVega, which is a sweet combination of both of their family monikers. He's also head over heels in love with his wife and the two released a joint statement after their wedding that read: “We are so thrilled and blessed that we were able to have all of our close friends and family join us on our special day.”

He & Alexa Are A Great Couple

This is the adorable DWTS coming-out video Carlos and Alexa made when they announced to the world that they had both agreed to sign on as the first married couple on the reality show. You just know producers are going to surprise viewers by teaming the PenaVega power couple together one week, right? I'd kill to watch them recreate the closing scene from Dirty Dancing.

He's The Host of Webheads

Remember all of those kids' game shows you couldn't get enough of after school? Well, Calos is helping a new generation of tweens and teens discover them by hosting Nickelodeon's Webheads, which is a bit like America's Funniest Home Videos, only more youthful and focused on online videos — so yeah, lots of cute cats.

He Attended The Prestigious Boston Conservatory

One way or another, this guy was going to hit the big time. While attending The Boston Conservatory, a prestigious private performing arts college, he auditioned for Big Time Rush and scored the starring role after just three screen tests. In an interview with The Patriot News, he explained that his career ambitions aren't limited to the band:

I think that me and the other three guys have a really unique situation, because we're not just performers. We're actors. We get the best of both worlds. I think we're all gonna do our own things. I love music, but I love acting, so Broadway has always been a passion of mine. I might try to do a Broadway show some day after Big Time Rush. I might try a solo thing. I might try to do a movie. But what's cool is that the band can continue to perform and we can also be free to go and pursue our dreams.

He's Going To Be The Perfect Kenickie

I'm sure I'm not the only one who, growing up, got a bigger rush out of watching the devilishly sexy Kenickie in Grease than Danny Zuko, so it's my pleasure to pass on the good news: Carlos is going to play Kenickie in Grease: Live , which will air Jan. 31, 2016. If I remember correctly, all of the guys in the original movie were pretty nifty dancers, leading me to believe Carlos is going to cut a serious rug on DWTS. In case you're curious, his resume is chock-full of interesting roles in films and TV shows like Summerland, Judging Amy, and ER.

He's A Florida Boy At Heart

Carlos grew up in Weston, Florida, and his favorite past times include scuba diving, Tae Kwon Do, and roller hockey. His Instagram is a testament to healthy living and often shows him, Alexa, and friends soaking up nature, boating, swimming, and hiking.

And finally, even though you didn't ask for it, here's one final photo to leave you wanting more. It seems our boy has serious abs:

Now, tell me you aren't totally looking forward to seeing him slay his competition on Dancing With the Stars.