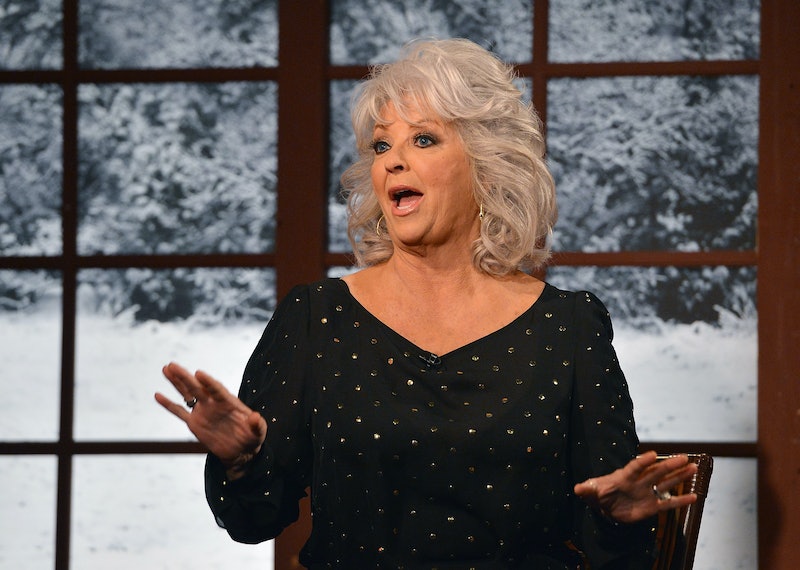 For some, Autumn means comfy sweaters and pumpkin spice lattes, but, for those who live their lives on a TV schedule, it means the announcement of which celebrities will be joining Dancing with the Stars. The ABC smash hit has given us such gifts as Alfonso Ribeiro completely dominating with and without doing the Carlton, so the anticipation is high for the next season — especially considering the many, many rumors that have been flying about who is joining the show. While it's been confirmed that former Backstreet Boy Nick Carter will be lighting up our screens, along with Bindi Irwin, Chaka Khan, Victor Espinoza, Alexa and Carlos PenaVega, and Gary Busey, who else can we expect to entertain us or disappoint us with their dancing skills this year? Well, on Tuesday, the Dancing with the Stars Season 21 cast was finally announced, and one interesting rumor is true: Paula Deen will be competing for the Mirror Ball trophy.

Of course, this announcement didn't come with a nod to the controversies that Deen has found herself mired in over the past few years. In fact, that was the first question that she asked. And what is she hoping to get out of the competition after all those scandals? "This is the first time in a few years that I felt like my weight would allow me to participate. And I've been very busy with my new book, Paula Deen Cuts The Fat," said Deen, which I... assume was meant to be some sort of answer to the question. Somehow. "What I'm hoping to get out of this is a bunch of new friends — and maybe lose some weight, and a little better body. But the friends are... see, I know him [Val Chmerkovskiy], but I don't know him... I'm getting excited about really getting to know him."

So, basically, she's here to get in shape and flirt. But, hey, considering it's Val Chmerkovskiy she's talking about, I can't say I really blame her for that. For completely skirting the subject of her controversies, sure, but for winking at Val Chmerkovskiy, no. Who wouldn't?

As for the rest of the cast, they seem to be experiencing a combination of excitement and fear. "I'm not used to any of this. I'm used to crocodiles," said Bindi Irwin during the group interview, pretty much summarizing what I'm sure every Dancing With The Stars contestant in history has probably thought at some point. Well, in their own way. "Crocodiles are way less scary. You kind of know how they work. The judges? You never know what they're going to say!"

Check out the other pairings of celebrities and professional dancers below, and then strap in for what I'm sure will be an amazing season of laughs, injuries, and Mirror Ball glory. The next season of Dancing with the Stars begins on Sep. 14, 2015.