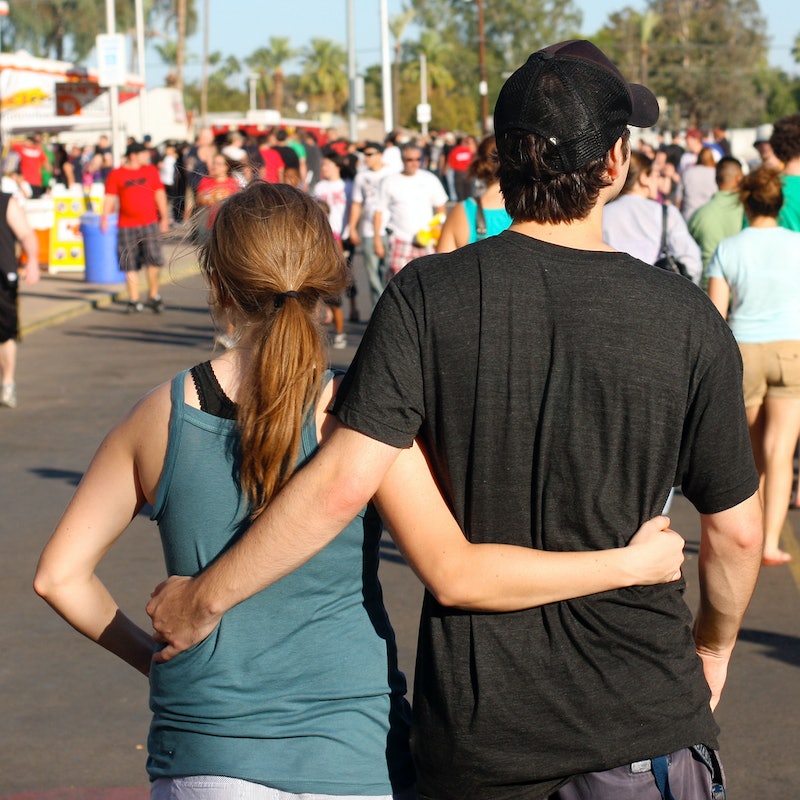 For far too long, LGBT couples weren't legally allowed to be husbands or wives. Instead, many of them used the term "partner" to denote that they were together and in a very serious relationship. Thankfully, that all changed on June 26, 2015, when the Supreme Court ruled that the ban on same-sex marriage was unconstitutional. Now, couples of all genders can call each other wives or husbands if they get married, but there are some pairs (both homosexual and heterosexual) who still prefer to call each other "partners"... and when you really think about it, it's not a bad decision at all.

Many of us practically squeal in delight at the thought of finally calling that person our "boyfriend" or "girlfriend" or "fiance." Defining your relationship is a major step towards having your own happy ending come true, so it's no wonder that we rejoice at the thought of someone special finally calling us their own. For plenty of other people, though, the idea of kind of belonging to someone else is, well, weird. The simple solution to overcoming that feeling of possession while still showing your S.O. and the world just how in love you are might be as easy as changing up your vocabulary.

I'm totally fine with being my boyfriend's "girlfriend," and if you're happy with the specific terms you and your S.O. use to define each other in your relationship, more power to you. In fact, Google Ngrams has shown that the popularity of calling someone your partner in a relationship seems to have leveled out after rising through the 1980s and '90s.

However, there are plenty of reasons to help make it rise again. If you've ever felt a bit weird about the terms you use with the person you're dating, it might be time to take a step in a more progressive direction for your relationship.

1. You Two Are Equals

Many people refer to the person they're dating as their "other half," and by calling your S.O. your "partner," you're truly embracing the idea that you are two halves of a whole, each representing 50 percent of all the good and bad of your relationship. When you use this term, you're saying that neither of you has more or less authority in your relationship, and you're happy to be on equal ground with the person you're with.

If you think of a pair of awkward sixteen-year-olds getting tangled up in each other's braces when you hear the terms "boyfriend" and "girlfriend," you're not alone. The words seem almost childish (not that "manfriend" and "womanfriend" sound a whole lot better), and then we have to clarify what we mean when we hang out with our platonic "gal friends" or "guy friends" so no one thinks we're just dating our entire social group. The word "partner" sounds a lot more grown-up and a lot less like you're clinging to middle school memories.

There are lots of people who don't feel like they fit the traditional label of being male or female, so it would seem obvious that words such as "girlfriend" or "husband" might be a bit too rigid for them. The word "partner," however, doesn't have a gender, which makes it great for people who identify as a third gender, are in the process of transitioning, or just don't like the idea of their status in their relationship focusing on what's between their legs. Even if you and your S.O. are perfectly happy identifying as male or female, it's kind of nice just to be able to use the same term to refer to each other.

4. It Encompasses What Makes Your Relationship Truly Awesome

I refer to Chris Pratt as my boyfriend all the time, but the fact that he doesn't even know that I exist makes our relationship a lot less special than the one I have with the guy I'm actually dating. The word "partner," on the other hand, implies that you function perfectly fine on your own, but are even better with your S.O. by your side. Just as we would hopefully trust a business partner to make the right choices on their own while still involving us in their plans, we also trust our relationship partners to be good people individually while still making us an important part of their lives. By using the word "partner," you are telling the world and the person you're dating that you two are an unstoppable team with an unbeatable love.

"In A Relationship." "Engaged." "Married." "In An Open Relationship." Facebook has estimated that up to 60 percent of their users specify their relationship status on the website, but not all of us are content to label exactly what we have with our S.O. (or at least share it with hundreds of people on social media).There are so many stages in a relationship, and it can be almost awkward to try to explain to people which one you're in at the moment. Maybe you're pretty much official, but haven't really had The Talk yet, or maybe you just aren't one of those people who feels the need to get specific about exactly the type of relationship that exists between you and your special someone. Referring to your S.O. as your partner is an easy way to say, "We're together, and the status of our relationship is of no one's concern but our own."

6. It's Easy To Make It Plural

If you're a word nerd or just lazy, I'd be shocked if you're not already using the term "partner" for this reason alone. It's a massive (OK, more like slightly inconvenient) pain in the butt to have to say something like, "We have officially been girlfriend and boyfriend for two years," especially when the sentence, "We have officially been partners for two years," rolls of the tongue so smoothly. Things get a little easier once you're engaged or married and become "fiances" or "spouses," but if you want to spare yourself the pain of having to say three syllables more than you need to until you finally reach that point, just use the term "partner" to make things easier on yourself.

Want more of Bustle's Relationships coverage? Check out our video on what it's like to be a bridesmaid for hire below.