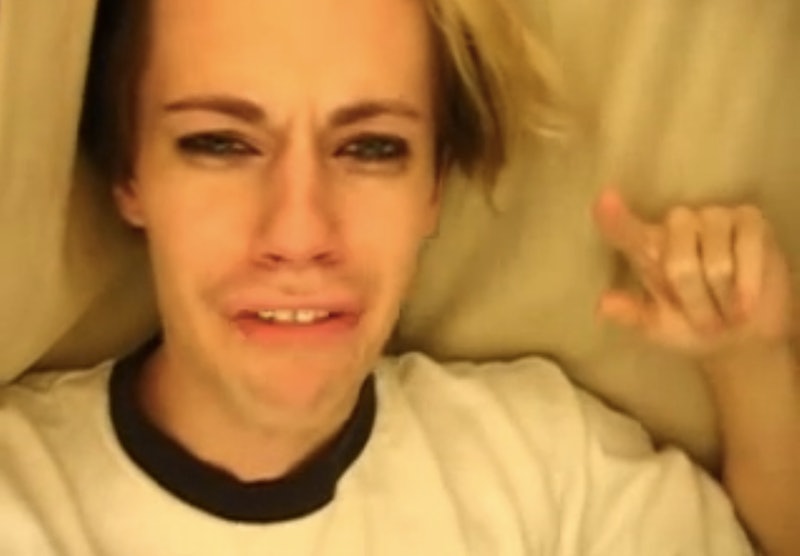 In 2007, my seriously cool friends and I were obsessed with Chris Crocker. We'd run through the hallways of our high school, where most people didn't really like us, screaming "leave Britney alone" and laughing hysterically. We'd send each other videos of Chris Crocker dancing or screaming things at the camera and feel gloriously in-tune, as if the mere fact that there was another weird kid, weirder than us perhaps, making waves across the Internet for being obnoxious and different could make us feel that much better about being considered obnoxious and different.

I'm ready to admit now, almost seven entire years later, that I never really got Chris Crocker's sense of humor at the time. I didn't find it unusually funny when he'd say things like "eat my cornhole" or cry into the camera, but I did want to fit in, and have something my friends and I could bond over, even if it was a screaming boy with more Britney Spears-related emotion than I ever thought possible. I might not have found Chris Crocker hilarious, but I did find him immensely comforting, in a weird, hard-to-understand kind of way.

As I aged, I no longer felt the need to pretend things were funny just to fit in, so I left Chris Crocker in my memories, blonde and yelling, with black eyeliner tears running down his cheeks.

But, as it turns out, Chris Crocker grew up as well, and it might surprise you to know that he is completely stunning and a genuine adult now. Just look at him:

Yeah. He's just one incredibly pretty dude, not to mention one with an HBO documentary made about his rise to Internet stardom and almost 180,000 followers on Twitter, proof if we needed any that not everyone forgot about Chris Crocker after high school.

In fact, his current following might well be proof that I shouldn't have forgotten him, either: He's funny, he's sexy, and he might, as he so wisely noted, have been one of the first people to become famous for not being famous. Think about that: The dude that first introduced me to the term "cornhole" was also pulling a Kardashian before the Kardashians even thought of it. I know, try to keep breathing here, it's a lot to take in.

Actually, don't keep breathing, look at another picture instead.

Chris Crocker was one of the first Internet celebrities to really grip the entire nation, and it's kind of refreshing to know that you can start out wearing pink glittery lipgloss and sobbing under a sheet about Britney Jean and still end up having it all, in a way. Crocker has met personal D-list icons of mine like Michelle Visage and Courtney Stodden (don't judge, people who say they wouldn't want to spend a night out on the town with Courtney Stodden are liars and cheats, end of) and he clearly manages to keep it real with a sharp sense of humor. One need look no further than his Twitter to see that both his look and his sense of humor have grown up with grace and panache.

But also... he's really hot. So the next time you think to quote "LEAVE BRITNEY ALONE" in some mocking homage to the ghost of high-school past, just remember that the guy who made that a thing now has more followers, a more interesting life, and possibly more fun than you do.