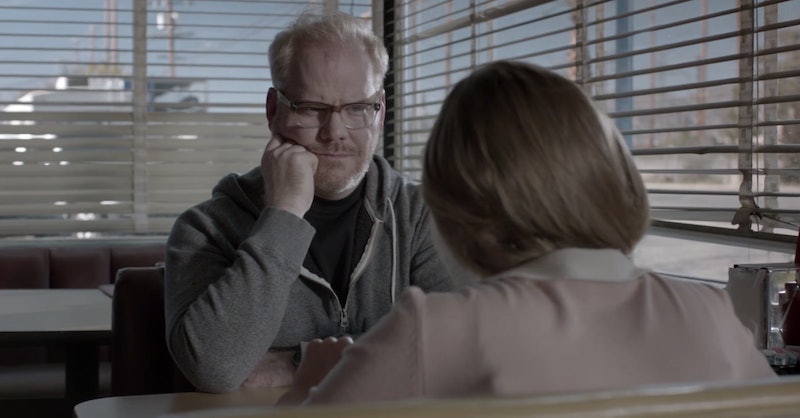 Oh god damnit, Shia LaBeouf. I feel as though every conversation I've ever overheard at a junket or experienced at an industry-related party has come to life in his new short film, HowardCantour.com (which, uh oh/update: turns out might just be a bit of plagiarism on LaBeouf's part. Sorry Justin M. Damiano creator, Daniel Clowes*). All of the self-obsessed nincompoopery that lines the streets of criticdom have come to life with this one, needling a commonly held delusion that having an opinion is a very noble task, and those of us who write them down for other people to read are somehow not as silly and self-important as the entertainment ephemera that gets the privilege of being skewered. (Spoiler Alert: we're all very silly and self-important. Narcissism's address is Hollywood.)

Jim Gaffigan stars as Howard, the self-proclaimed renegade of modern film criticism. He's a man alone, you see: even in a sea of reporters, journalist, and other media types, his opinions are different, and real, and true: not a bunch of nice niceness that's clearly only the work of major ass-kissing on behalf of the writer. Though LaBeouf does not appear in the film, his presence as a critic of criticism is felt throughout. The Nymphomaniac actor has stripped this particular subject to its core (metaphorically speaking, natch) to get to Howard's heart, seemingly in disrepair from under-use.

Howard writes pragmatic pieces (a far cry, it seems, from his younger days of writing what he was feeling), and sees his opinions alone in a sea of middle-of-the-roadness — clashing against the tide of, well, everyone else who perceives themselves to be doing exactly the same thing. But shhh! Don't tell poor Howard here, and ruin the nice little illusion he's got going for him that he's The One Voice to Rule Them All, The Little Contrarian That Could.

Because how often has anyone who's enjoyed a film or television series thought Howard's thoughts: "How often have we watched a movie and wished we could feel those emotions in our real lives? What's stopping us?" Most everyone, probably, at some point. And while it's easy as an outsider to point out what Howard seems unable to note himself: that real life isn't in the treading-water, static world of criticism, but when we are active in creating our own world and life. And he might want to quit the constant questioning, perma-self-obsession thing, too: might be hindering the whole 'capacity for feeling' thing.

For many people, movies work in their lives as vicarious wish-fulfillment. So they have no problem wallowing in the overwrought reasoning, the unchecked ego. And being fueled-by-personal-experience seems to be Howard's subconscious modus operandi, effectively making him so jaded that he cannot seem to trust the director's own earnest emotional reasoning for a particularly mythic scene. It's all, ultimately, because we as humans hurt each other in the name of self-preservation and expect everyone else to operate from that mindset at all times. Especially when something they've created is up for interpretation. Because words have the capacity to manipulate or change, given the multiplicity of meaning many words have. It's an ability to wield opinion as sword and shield, whereas actions are created and once they're done, they're done. They must stand vulnerable for the world to inject with meaning, subtext, controversy, etc...

Which is exactly why HowardCantor.com is so damn enjoyable: by juxtaposing the film critic to the film world, we're seeing the very struggle of life in a very meta way. Our existence is defined largely by action, not reaction. And LaBeouf knows vulnerability is key. But shhh: don't tell Howard that.

* Following the publication of this post, the allegations of plagiarism on the part of LaBeouf were made aware. Though we cannot go back in time and un-enjoy the clip for integrity's sake (and because we hate looking like a big ole uninformed dummy), we will say that we appreciate and respect Daniel Clowes' Justin M. Damiano, and the deftness with which he hit home the original conceit about critics and criticism.