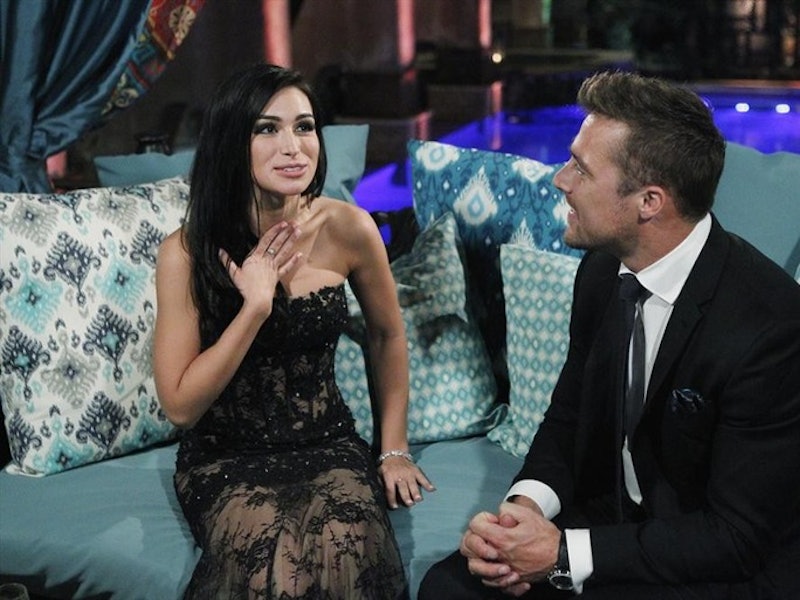 Everyone’s favorite emotional — but refreshingly self-aware — Bachelor/Bachelor in Paradise contestant, Ashley Iaconetti, has been known to make a Disney princess reference or two (or 27, but who’s counting?). If you've ever watched the show for, like, a second, you're likely aware that she likes to spit mad game by the fire while discussing her likeness to Aladdin's Jasmine, and consistently reminding us that her beau of choice, Ashton Kutch — I mean, Jared — would make the perfect Aladdin. Hey, she even threw a lamp euphemism into the mix once! To say that she takes these analogies lightly would be an understatement and disservice to her Titanic "Heart of the Ocean" necklace. Homegirl’s a romantic, and I can’t fault her for that. To be honest, Ashley I.’s commitment to not settling (and to the Disney franchise) should be applauded: She knows what she deserves, and she’s not afraid to wait until she finds it. Which begs a serious question: Does Ashley I. have more in common with these Disney princesses than we think?

Like any hard hitting journalist would when faced with this question, I spent several sleepless nights and put in countless hours of research to figure out exactly which princess Ashley I. reminded me of most — but, a funny thing happened: I ended up with a different kind of conclusion, and that is that Ashley I. is a magical hybrid of them all. Don’t believe me? I have science (and by science, I mean hyperbolic theories) to back this all up.

(Also, just wanted to throw this out there because I think everyone needs a Disney princess in their #squad. I’ve already started a crowd fund/petition for Ashley Iaconetti to either join my group of friends or Taylor Swift’s, so if you know where to find her please pass on the news. Thank you in advance.)

Now on to the reasons Ashley I. is actually all of the Disney princesses...

Why else would Chris Harrison just be hanging out in the shrubbery above the house when she needed him most? Stay with me here — Ashley I. runs up to the backyard of BiP's chateau and summons help in a time of distress. Then somehow, magically, Ashley I. now has the ability to go to the ball — I mean fantasy suite? Sounds real familiar, no?

2. She Brushes Her Hair With A Fork, Like Ariel

Actual footage of Ashley I. brushing her hair (OK, extensions) with a fork. Editor’s note: This video has not been dramatized.

Even though Ashley I. might not be able to articulate her feelings to Jared verbally, she obviously knows her way around a book. Ashley has a master's degree in Broadcast Journalism, which means that even though she might not read anything now (not including her 3,495 page letter), she at one point or another, must have.

5. She Spent Some Time In The Desert, Like Jasmine

Alright, so Jasmine lives full time in the desert, but Ashley I. spent some unforgettable time there too. See: the badlands from Bachelor’s yore. Plus, there’s all the obvious reasons like, oh, I don’t know — the fact that she wears only turquoise/thinks Jared is Aladdin/told everyone she actually is Jasmine IRL.

6. She’s Super Picky About Who She Makes Out With, Like Sleeping Beauty

Although Aurora’s story sort of goes against everything I believe in life (i.e. a woman needs a man "save" her, a man giving himself the right to kiss a woman who is comatose and cannot give actual consent, etc...), you can’t deny that there’s a similarity here. Ashley I. is super picky and doesn’t fall for people often. She’s not going to kiss any old guy on Bachelor in Paradise, just like how Sleeping Beauty didn’t settle for anything less than “her one true love” to wake her up from that awful spell.

She has at least seven friends (Joe, Mckenzie, Megan, Samantha, Juelia, Carly, Jade) who are all different from each other, but sleep in the same house together. Is it a coincidence that one of them is grumpy, but that she takes a special liking to him anyway? (*cough* Joe *cough*.) I’d like to think there are no coincidences.

Hopefully, I’ve just opened up a whole new world of possibilities for this princess. (I’m thinking a theme park named after her. Too much? I’d settle for a movie).