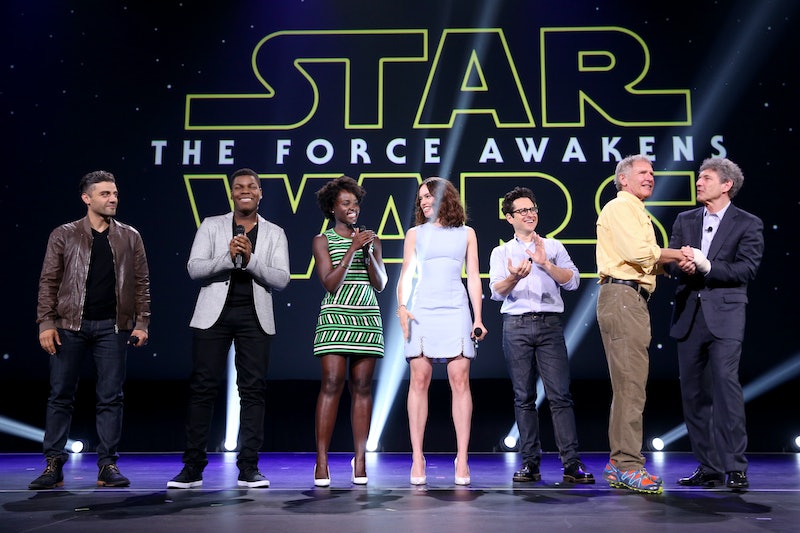 For all you feminist Star Wars fans out there who were nervously holding their breaths about whether or not the Rey action figures released during Star Wars' Force Friday rollout would be pointlessly sexualized (a sad fate that many female characters in male-dominated sci-fi franchises are subjected to), good news: you can breathe easy, because it looks like the Rey action figures are totally appropriate and badass. For as much as I love sci-fi films, there have, in the past, been some noticeable and problematic differences in the past between the way the action figures and statuettes have been portrayed between the genders. Usually, for instance, the male characters are represented as strong and capable, crouching in battle stance with their weapons at the ready — while the women, let's face it, are weirdly sexualized despite the fact that these are supposed to be kids toys.

Even though in the films, characters like Princess Leia and Padmé Amidala are highly-trained with their weapons, skillful fighters, and more than capable of taking care of themselves, their costumes have managed to highlight their sexuality instead of their skills. It's kind of a bummer, even more so because it happens so often. Take the Padmé Amidala action figure, for instance: Sure, the male members of the team are fighting in essentially tunics and pants, but she, instead, is rocking a skin-tight belly shirt and perfect up-do?

Or, what about Leia's slave outfit? Yes, this costume had a point in the film, but it's still a little uncomfortable that the action figure a main female lead in a male-dominated franchise gets is overtly sexualized and depicting her, well, enslaved.

All in all, in the past, no opportunity to inject a little sex appeal was missed when it came to the action figures — so I was nervous the same thing would happen with Daisy Ridley's new Star Wars character Rey. But, thankfully, it seems it was for nothing: Rey is a scavenger who's used to being independent and taking care of herself, and guess what? Her action figure, which hits shelves as part of Force Friday, looks the same way! Take a look:

Love love love. She's wearing clothes appropriate for someone who spends a lot of time in the blazing heat, but is still an individual and discernibly female.

There's nothing sexual about her pose or her expression — this is just an action figure of a person who happens to be a woman and is coming off capable and to be taken seriously. Standing ovation to Disney and Hasbro and everyone so far who collaborated on the Rey models, because I feel like they're right on the money.