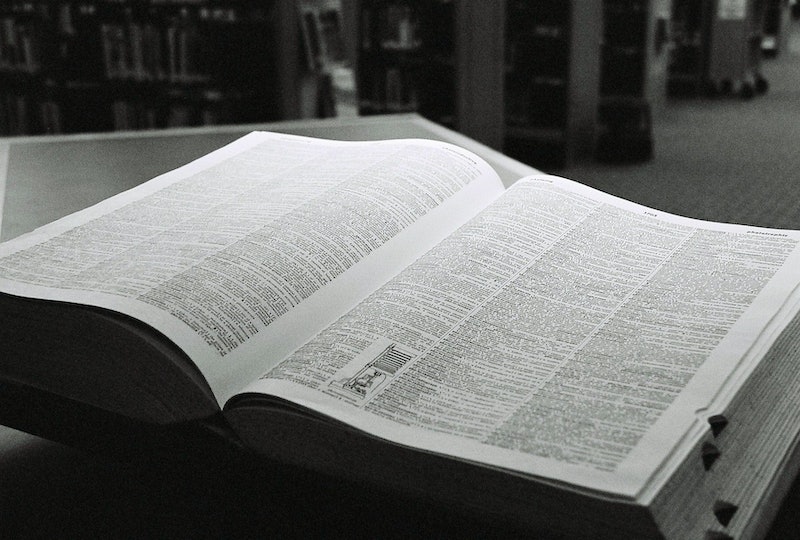 As a writer, I often use the dictionary for inspiration; in addition to expanding your vocabulary, it's possible to come across a unique word every once in a while that sparks an entirely new train of thought. The Dictionary Stories Tumblr, though, doesn't stop at using definitions. Using the oft-ignored examples sentences provided by the New Oxford American Dictionary, San Francisco-based creator Jez Burrows creates brief, clever short stories.

"Almost every word you’ll find in the dictionary is accompanied by an example sentence... All the stories collected here are written entirely using example sentences from the New Oxford American Dictionary, with nothing added except some punctuation to piece them together," Burrows explains on the Dictionary Stories information page.

Despite their concise nature, the stories have an appealing, graceful vagueness to them. In a few short sentences written by lexicographers he's never met, Burrows manages to create atmospheres that range from the eerie, as with the uneasy "Seven Sisters," to the melancholy-yet-romantic, like "Poor John." Some, such as "Divorcee," are surprisingly hilarious.

Burrows told It's Nice That that he believes the stories' appeal lies in the universality of the language. Because most people are accustomed to dictionaries, "the stories feel accessible in a way that perhaps other short fiction might not," he said.

He also explained the process behind his stories. "Often I’ll find at least one [word] that makes a good jumping-off point and I’ll start to flesh out some sort of vague narrative, then work backwards," he told It's Nice That.

He added that some words are easier to build a story around than others, but he enjoys linking seemingly unusable sentences together.

Burrows is also a designer and illustrator whose work can be found at his website. Check out a few more stories below, but be sure to head over to the Dictionary Stories website for more.