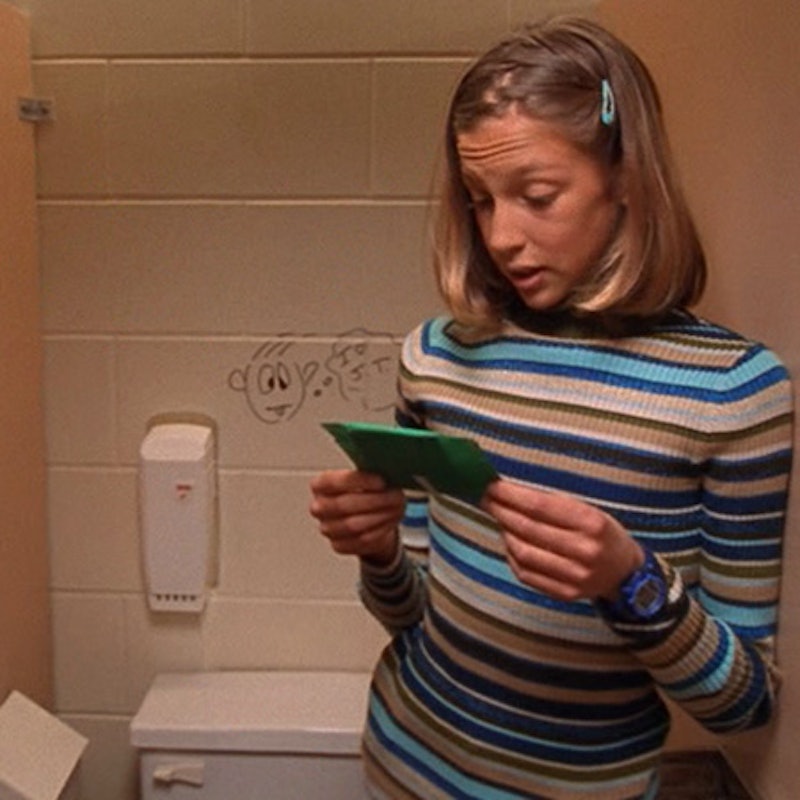 I got my first period shortly after my 11th birthday; I woke up one Saturday morning to find that I had "become a woman" all over the friendship ankle bracelets I made at camp. Irate at both my new menstruation-filled future and the fact that all my ankle bracelets were ruined (it took a lot of time to make them, OK?), I spent the rest of the day sulking in my playroom, taking the edge off with my Barbies. As you may have guessed from the words "playroom" and "Barbies," no, I was not ready for my new reality as a sexually functional adult. I just wanted to play with my dolls in peace.

It wasn't just isolating and weird to be the first of my group of friends to take the leap from pondering Are You There, God? It's Me, Margaret to actually having my period; I was also a bit of a marvel to the adult women around me, who were shocked that someone young enough to still be emotionally involved in X-Men comics was also technically able to reproduce. "I didn't get mine until I was 16," my mother told me. "It must be all the hormones they put in meat these days." Gee, Mom, thanks — that's very helpful.

Though the average age of first period has been dropping for lots of women — now it's around 12 or 13, down from 17 a century ago — those of us who got it early are still in a weird club. Dealing with something as adult as the Crimson Menace at an age when you just wanted to play tag with your friends was a bummer at the time; but as an adult, I realize that it has placed me in the Sisterhood of Early Menstruators — a group of women who have mostly experienced these five things.

1. You Always Wonder If You Could Have Been Taller

Getting your period early tends to pair with hitting the general turf of puberty early, too; within a year of getting my period, I was also swinging a pair of woman-sized breasts through the halls of my middle school. Reaching puberty early generally means that you started getting taller earlier than the other kids in your school — and that you stopped growing sooner than your peers, too. And this isn't just an old wives tale: a 2005 study published in the American Journal of Epidemiology found that girls who got their periods early were, in general, shorter than their peers who got their periods later.

Would I have actually been 5'10" like Cindy Crawford, instead of 5'2" like your rapidly shrinking grandma, if I had somehow staved the crimson tide off for a few more years? Probably not. But it is always comforting to have something to blame my frustration on when I can't quite reach the Count Chocula shelf at the grocery store.

2. You Got Your Period In A Place Where No One Was Prepared For It

I'm not just talking about how you got your first period way before your parents ever considered buying some emergency pads (though that, too). I'm talking about how the irregular nature of our first few menstruating years meant that you unexpectedly got your period in at least one place where no one expected to be dealing with someone getting their period.

I'm talking Brownie meetings, craft workshops at the local children's museum, birthday parties at the American Girl store. You have suffered the indignity of having a woman's problem in a place for children, and yeah, it may have given you a chip on your shoulder.

3. You Guided Most Of Your Friends Through Their First Periods

Getting your period early isn't all bad stuff, of course. You were basically the Yoda of yonic bleeding by high school, and when your friends' vaginas stopped taking their sweet time and finally started menstruating, you were there with wisdom, facts, and spare tampons. You explained the finer points of how to get blood out of denim (pop some OxyClean on that sucker and soak). You taught them how to fight period cramps (OTC painkillers or aggressive masturbation). And, yeah, you may have done some hands-on work when a friend was trying to use a tampon for the first time. It was a little awkward, but hey, it's nice to feel like an expert, right?

4. You've Had More Than One Person Try To Figure Out "Why" You Got It So Early

Was it the hormones they put in meat these days? Or did you drink too much milk? Or were you exposed to too much indoor lighting? Girls who got there periods early have heard all of these random theories and more — because we've all encountered people who want to play detective about our bodies, as if getting your period early was a defect, or a grave omen of health problems to come.

5. You're Glad You Got It Over With When You Did (Now)

Yes, it may have sucked at the time. Yes, you probably just wanted to read Goosebumps books back then, not get an awkward, jittery lecture from your parents about how you could get pregnant now just from sitting next to a boy on the bus. Yes, it was weirdly isolating at times (like when you had to interrupt a sleepover to ask your friend's mom for pads).

But considering how much you had on your plate as a teenager — figuring out your sexuality, dealing with school, navigating the myriad ways that your parents were clearly trying to ruin your life — it sometimes seems good to have just gotten it out of the way sooner. I mean, having to handle all that stuff, plus making your peace with the fact that blood comes out of your junk every month for the next 30+ years? I don't know how anyone does it.