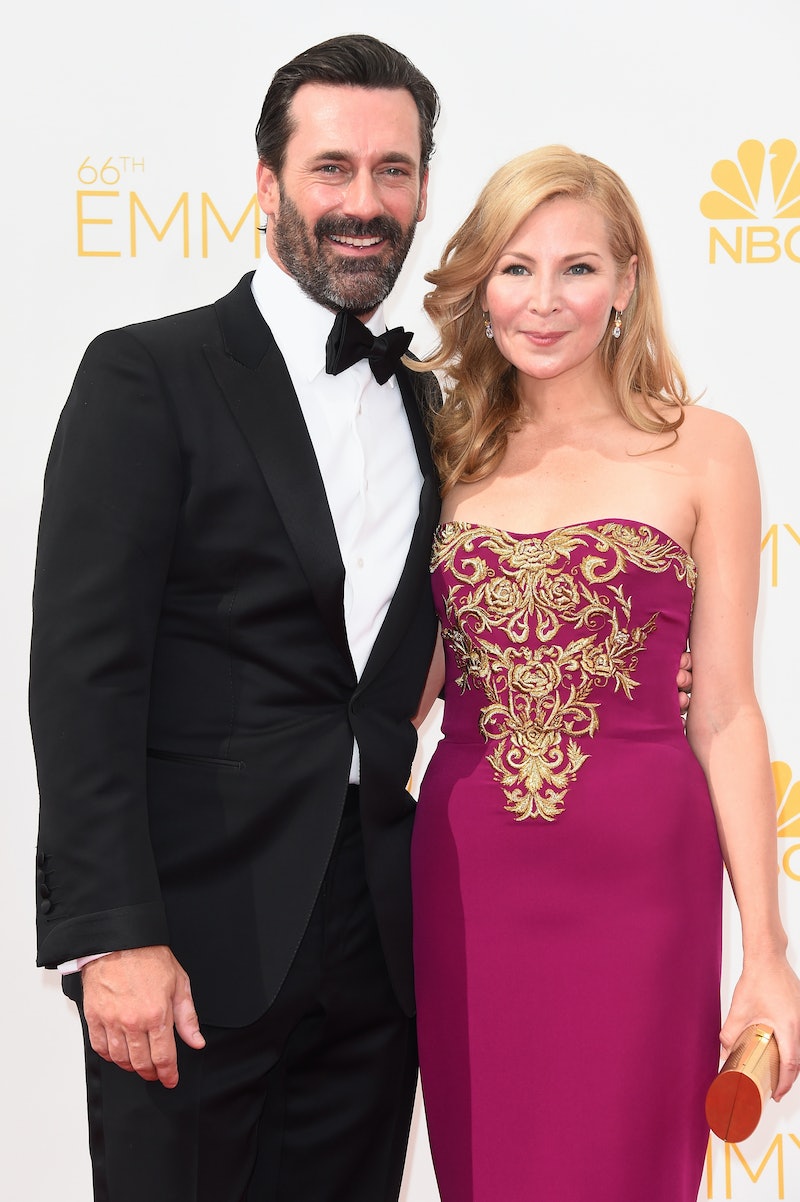 The sad news that Jon Hamm and Jennifer Westfeldt have split up after 18 years together truly sent shockwaves that were were felt even beyond the entertainment industry. It wasn't just because the award-winning actor and the talented actress/screenwriter seemed so in love every time they were out in public, but also because Hamm and Westfeldt's red carpet looks were amazing. Seriously, the couple style game that these two brought will be missed come awards season.

Hamm and Westfeldt began their relationship in 1997 and worked together in the 2001 film Kissing Jessica Stein, which she wrote and co-produced. The couple co-starred a few years later in Westfeldt's directorial debut Friends with Kids. But it was Hamm's critically acclaimed role on AMC's Mad Men that made them red carpet regulars, whether it's the Emmys, the Oscars, or for the show's season premiere.

It's hard to top the glamour and sophistication that Hamm and Westfeldt brought to Hollywood, but while it's unfortunate that they decided to part ways, the couple still delivered some amazing red carpet style together.

Yup, that's how so many of us felt every time these two walked the red (or green) carpet.

There was something so retro Hollywood about these two, but never dated.

The couple still radiated even while wearing a darker palette.

For a brief period, the couple gave George and Amal a run for their money.

Minimalist chic at it's finest.

She's seriously fierce in royal blue and he is working that tux.

They are the King and Queen of Hollywood prom.

His and hers leather? I die.

Smiling in the Rain

OMG this is too much.

They would have made such a handsome groom and bride.

More like this
10 Flashiest Looks From The 2023 Critics' Choice Awards
By Allie Fasanella
Phoebe Dynevor Serves ‘Bridgerton’ Underboob In Stunning Floral Gown
By El Hunt
Jennifer Lopez Wore A Naked Dress To The Shotgun Wedding Premiere
By Dominique Norman
J.Lo's Micro-French Manicure Has A Fun, Sparkly Twist
By Olivia Rose Rushing
Get Even More From Bustle — Sign Up For The Newsletter
From hair trends to relationship advice, our daily newsletter has everything you need to sound like a person who’s on TikTok, even if you aren’t.