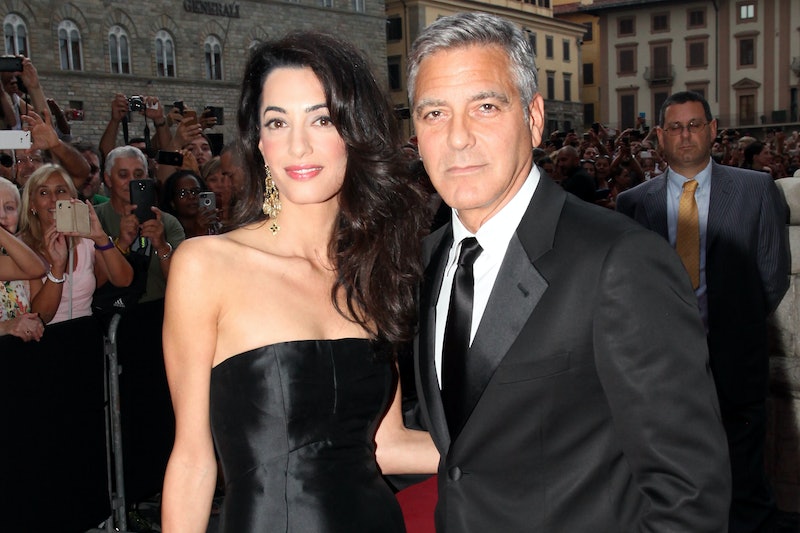 None of us thought that we would see the day when Hollywood’s resident bachelor would get married, but then again, it seemed like he didn’t think so either. Yes, congratulations, thrown rice, and some disbelief are in order, because it looks like George Clooney and Amal Alamuddin are married, you guys. The London lawyer finally made an honest man out of Clooney in Venice, Italy this weekend in a ceremony with friends and family. An old friend of Clooney's, Walter Veltroni, Italian writer and former Rome mayor from 2001-2008, conducted the ceremony in Venice, Italy.

The reception took place at the Aman Canal Grande resort and guests enjoyed the party near the canals and palazzi of the famous city.

According to reports, Clooney's new in-laws are seriously overjoyed to welcome him into their brood too. People reports that Alamuddin's father, Ramzi found the actor to be "very sympathetic, intelligent, cool, easygoing and crazy in love with Amal."

Alamuddin and Clooney got engaged back in April much to everyone's surprise. We really can't forget the string of models and actresses the suave actor dated over the years, earning him quite the reputation as a bachelor. He went so far as to bet actress Michelle Pfeiffer that he would never get married again. He even upped the stakes because he seemed so adamant about it. "I bet him he would get married," Pfeiffer told UK talk show host, Jonathan Ross back in 2007. "He keeps inflating the bet from $100 to $100,000." Obviously, Clooney is going to owe some money big time now.

Congratulations to the happy couple and to Pfeiffer, who is $100,000 richer today.