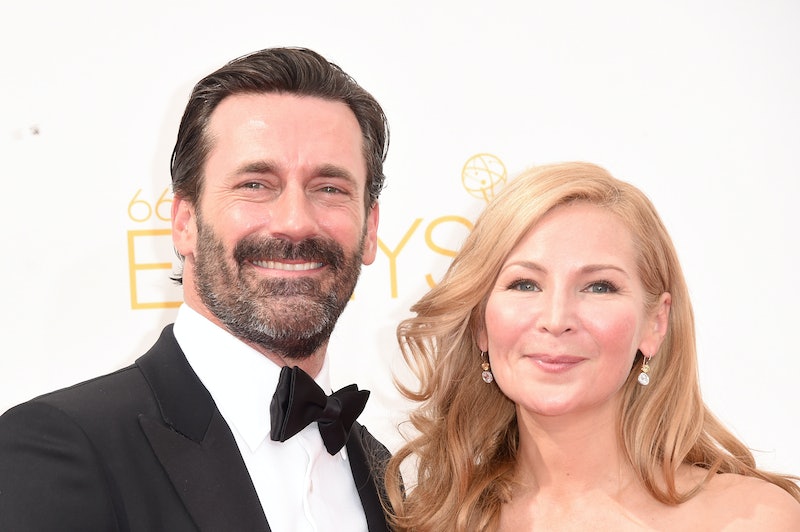 It's official: Jon Hamm and his girlfriend of 18 years, Jennifer Westfeldt, are over. And, no, this isn't another false alarm. On Monday, the two actors confirmed the split in a statement, saying, "With great sadness, we have decided to separate, after 18 years of love and shared history. We will continue to be supportive of each other in every way possible moving forward." Hamm and Westfeldt did not give a reason for the split, and, though the two have stated that they will "be supportive of each other," only time will tell whether or not the couple manages to remain on good terms. But, the question remains, why did Jon Hamm and Jennifer Westfeldt break up?

According to new reports, Hamm's alcohol addiction was not the reason for the split, instead, reports are pointing to Hamm's unwillingness to start a family with Westfeldt as the cause of the break-up. "Jennifer realized that she and Jon don't want the same things. So they agreed that it was time to take a step back," an anonymous source told Star.

Both Hamm and Westfeldt have spoken before on their decision not to have children, with Hamm telling Playboy in 2012, "I don't have a driving force to have a baby. That said, I'm in a committed relationship, and if it ever came up, I'm not ruling anything out." Well, if the rumors are true, it seems the Mad Men actor may have finally ruled out having a child.

However, suggesting that Hamm and Westfeldt broke up because Westfeldt wanted to have children could easily be a tabloid fabrication — one that fits in with society's prescribed gender roles. In fact, Westfeldt echoed Hamm's statements on the possibility of having children in a separate interview in 2012, telling The New York Times, "I kept feeling like I'd wake up with absolute clarity and I haven't. And we have a pretty great life together. The chance that we'll regret it doesn't seem like a compelling enough reason to do it."

Whatever the reason for the breakup, it's unlikely any official reason will be released to the public any time soon.

More like this
Bennifer's Relationship Timeline Now Includes A Grammy Date Night
By Jake Viswanath
Jennifer Lopez & Ben Affleck’s Officiant Spilled The Tea On Their Wedding
By Sophie McEvoy
Jennifer Coolidge Hunted For Jewels & Lashes In J.Lo’s Hotel Room
By Jake Viswanath
Michael B. Jordan Tackled His "Public Breakup" With Lori Harvey On 'SNL'
By Brad Witter
Get Even More From Bustle — Sign Up For The Newsletter
From hair trends to relationship advice, our daily newsletter has everything you need to sound like a person who’s on TikTok, even if you aren’t.