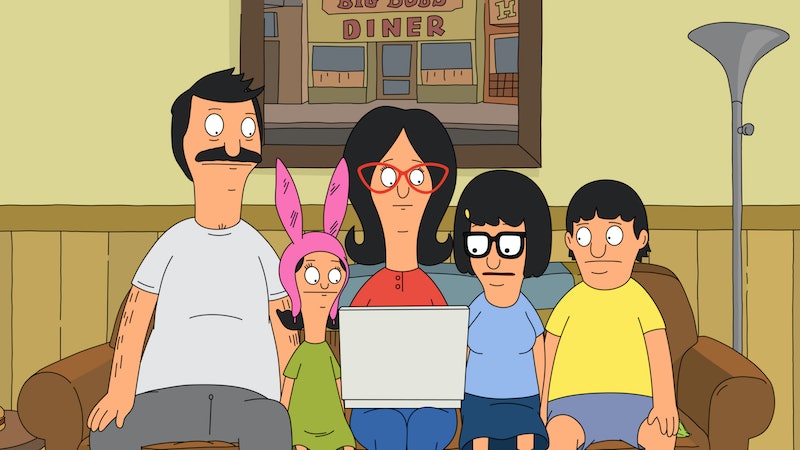 Are you tired of your friends not listening to you when you tell them Bob's Burgers is the funniest show on TV? Whether they just don't watch animated series or are just baffled as to how a show about a family running a burger joint could hold so many laughs, I have a way to sway them. (And hey, if you are not a Bob's Burgers believer, this list should woo you over to the Belcher side too.) I have chosen nine Bob's Burgers episodes that will hook your friends because starting at the beginning is not your best bet with this show.

Bob's Burgers is all about the mix of pop culture-laced humor, (animated) physical comedy, and genuinely warm stories about the Belcher family and their friends. The show can go from making you laugh until you cry to actually making you cry at a breakneck speed that doesn't necessarily come through in the pilot. While there are certainly some plots that recur and character's origins that could be confusing when shown out of order (like Dr. Yap's), for the most part, you can start with any Bob's Burgers episode and not be lost.

For that reason, these nine episodes are the perfect episodes to show new viewers if you want them to become as obsessed as you are. They display the best the Belchers have to offer while also giving viewers an idea of what kind of storytelling they're in for. Prepare yourself for the perfect Bob's Burgers lineup.

Since "The Deepening" is a straight-up parody of Jaws, this is an episode where everyone is going to know the pop culture touchstone. This isn't the best episode to showcase the relationships between the characters, but if your goal is to get everyone laughing, then you can't go wrong with a bloodthirsty mechanical shark.

I am breaking out the big guns early because if you don't get a response out of "The Equestranauts," then your friends may not be meant for Bob's Burgers. This episode not only playfully sends up Brony culture, it has a genuine message about inclusivity, and showcases just how far Bob will go for his kids when he goes undercover to get Tina's beloved Equestranaut figure back. This episode is widely considered the best the show has produced so far because it is basically flawless.

One of the show's biggest draws are the kids. Tina, Gene, and Louise are hilarious in any combination, but when they are all three together, magic happens. Add in Regular Sized Rudy and you have a recipe for maximum hilarity. The kids pull a major chocolate heist in this episode, and in the process your friends will get a good idea of all of their personalities.

Tina has become an icon of sorts for fans, and if you've ever been on Tumblr, then you've probably seen many, many memes featuring the Bob's Burgers queen. "Bad Tina" features Tina getting in touch with her bad side, but it's an incredibly endearing episode that reveals why Tina is such a fan favorite.

Maybe I'm biased because I love holiday episodes, but I think the Thanksgiving outing "Dawn of the Peck" is one of the show's finest half-hours. For starters, there's drunk Bob, who is the best Bob, then there are an assortment of crazy chickens, ducks, and turkeys plaguing the town, and Linda gets to be a big damn hero. What's not to love?

Another parody episode, this time the show replaces E.T. with a talking toilet that Gene befriends. The outlandish concept works on every level thanks to Gene's unwavering devotion to caring for O.T. and saving him from a toilet bandit. Bob's Burgers can get weird, and when it does it usually leads to good things.

Louise becomes obsessed with taking down her new science teacher by exposing Thomas Edison's elephant murdering past. There's revenge, a perfect Edison takedown, and a show-stopping musical number that will be stuck in your head for days.

Best Game of Thrones parody ever.

Choosing between the show's Halloween episodes isn't easy because they are all standouts, but "Fort Night" gets the edge for featuring the wonderfully psychotic Millie holding Louise and the rest of the gang hostage. Millie is just one of the show's many, many fun recurring characters. She stands out for her frenemy status with Louise though, and their weird relationship has never been better than it is in "Fort Night."

If you start initiating your friends in the ways of Bob's Burgers now they'll be ready for the Season 6 premiere on September 27 on Fox!

More like this
Courteney Cox & Laura Dern Proved Their BFF Status With Matching Tattoos
By El Hunt
Here’s What Happens To Bill & Frank In 'The Last Of Us' Video Game
By Brad Witter
Michael B. Jordan Tackled His "Public Breakup" With Lori Harvey On 'SNL'
By Brad Witter
Who Is Murray Bartlett Dating? 'The Last Of Us' Star Is Extremely Private
By Alyssa Lapid
Get Even More From Bustle — Sign Up For The Newsletter
From hair trends to relationship advice, our daily newsletter has everything you need to sound like a person who’s on TikTok, even if you aren’t.