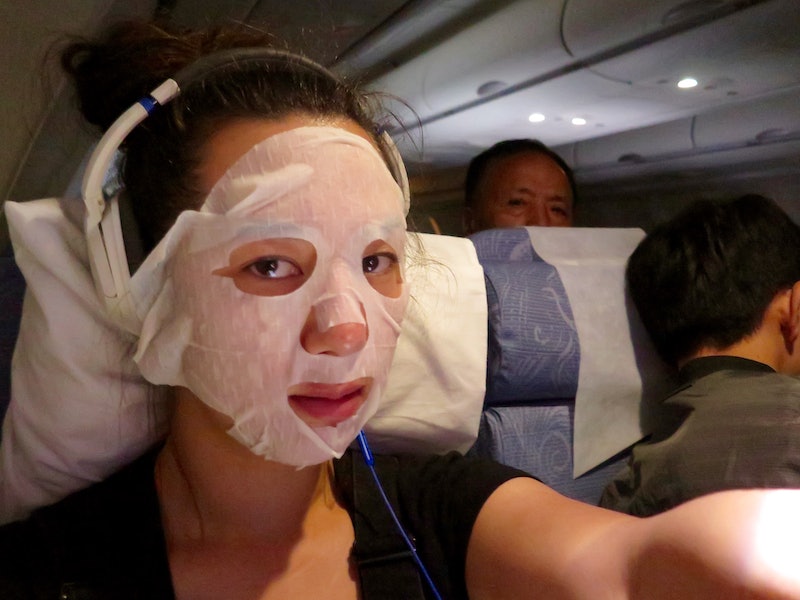 Beauty editors and celebs are constantly offering up skincare tips for long flights, but I've always been a bit skeptical about some of these alleged go-to routines. Although I know that airplane travel can wreak havoc on skin, I find it hard to believe that throwing on a sheet mask in public, especially while packed next to a stranger in coach, isn't the most awkward thing ever.

However, there's some logic to following a multi-step skincare routine on an airplane, even though all you really want to do is sleep as comfortably as possible and maybe catch a trashy movie... or two or three. The low humidity in the skies can both dry out skin and cause oily skin to produce more oil, cruelly causing zits.

As an adult who still struggles with acne, airplanes and travel in general are no fun for my skin. When I boarded a recent flight from Paris to Beijing on my way to Seoul, my face was already red and irritated, and my forehead and chin were plagued with zits. (To be fair, I doubt my diet of baguettes and goat cheese during 10 days in Paris really helped me out with this one.)

With nothing but 10 hours of Internet-free time on my hands and a neatly packed quart-size bag with travel-size bottles in my carry on, I figured I had nothing but dignity to lose and only flawless skin to gain. So on my recent 10 hour long flight, I put seven popular in-flight skincare tips from fashionable frequent fliers and skincare pros to the test to see if they would make a difference and if they were realistic to do in tight quarters.

Most expert in-flight beauty routines begin with cleansing one's face and removing all makeup, so once we reached our cruising altitude, the first product I reached for was my pack of Nivea face wipes. I bought this at a pharmacy at Amsterdam Central Train Station, so I don't exactly know what it says because it's in French and Dutch. But from what I can decipher, they're a three-in-one exfoliating, cleansing, and makeup removing wipe.

After using them a couple of times, I'd give 'em a thumb's up. They're slightly textured, hence the exfoliation, but still gentle and definitely pack a punch when it comes to cleaning up. I was shocked to see how much dirt came off my face after the first couple of wipes.

I've heard of dusty travelers before, but I didn't realize it was literal, especially in the age of air travel. I was glad to have wiped all of this off my face before sitting in my own filth for the next 10 hours and trying any other skincare products.

After I sufficiently grossed myself out by the amount of dirt on my face, I moisturized using Le Petit Marseillais hydrating cream in olive and sweet almond all over my face. I was shocked at how quickly the thick cream soaked into my already parched skin, especially since we were less than an hour into the flight. I followed up with a light layer of Caudalíe S.O.S. Morning Eye Rescue underneath my eyes.

No one, not even my seat mate only inches away from me, seemed to notice me. Even if they did, I was done moisturizing in under five minutes, making this perhaps the easiest and most discreet way to keep skin from drying out on a plane.

Though I truly believe Smith's Rosebud Salve is perfect for every occasion, the thick fragrant formula is particularly well-suited for airplanes, where lips quickly get chapped and people often smell bad. Add a lunch of salmon and green beans and rice, and the weird smells hit hard. After I finished my meal, I slathered a layer of Smith's on my lips and let it soak in. My chapped lips were no more, although I did reapply a few more times over the next 10 hours.

Three hours into the flight, my body felt like it was late afternoon, but it was already lights out on the plane. I popped on my delightfully tacky pink bear eye mask and managed to fall asleep for about half of a podcast, after which I woke with a start and a dry face. I grabbed my travel-size can of Avène Eau Thermale and spritzed.

Maybe I was applying it incorrectly, but this hydrating spray felt more like I was just splashing cold water on my face than actually moisturizing. It was not my favorite way to wake up from a nap, especially a short one during which your seat mate has been jabbing you with his elbow.

Though putting on a sheet mask is an oft-lauded celebrity in-flight skincare tip, I was most nervous about this one because it's the most noticeable. There's really no way to look low key, let alone cute, when you have a sheet mask on your face. However, any hesitation I felt about doing a beauty routine on the flight or discomfort I had about looking like a doofus went right out the window when my seat mate slapped me in the face with his carry-on bags as he tried to squeeze them into the overhead compartment and under his seat before the plane even took off without apologizing. (The constant jabbing during my nap didn't help, either.) This was not someone I was going to try to impress, so I really had nothing to lose.

I got a ginseng sheet mask, which promised to tone and revitalize, from Sephora, and, with some difficulty in the dark cabin, slapped it onto my face. I let it sit for about 20 minutes as I read Lolita, and then took it off. As you can tell from this picture, my neighbors and I really got along well on this flight.

Despite the less than friendly skies, wearing a sheet mask wasn't nearly as awkward as I worried it would be, and the cool mask was refreshing in the stuffy, recycled air. The hardest part about using the sheet mask was either putting it on or finding a place to throw it away once used. I ended up putting it back in the original packaging and tossing it in the bathroom's garbage the next time I got up.

Eight long, cramped hours after we took off, the lights came on in the cabin and the window shades were raised. Between my annoying neighbor and all the episodes of Scandal I had downloaded on my laptop, I didn't get much sleep, but my skin wasn't dry in the slightest. I would even go as far as to call it supple. However, I still had one more skincare product to try out before disembarking.

I have actively avoided facial oils — except for cleansing oils — because I already have fairly oily skin and break out a lot, but some swear by a good facial oil on a long flight. I picked up this travel-size spritz bottle of organic argan oil at Monoprix, which I liken to the French version of Target, and spritzed a little on my fingers, then rubbing it into my skin. I did not see much of a difference, to be honest. If anything, my skin tipped from appropriately moist to sticky and oily. It could have been due to the quality or type of oil I was using, but I think I might have taken it one beauty product too far.

Lots of frequent flyers swear by drinking two liters of water before, during, and after long flights as a way to keep both body and skin fully hydrated. Since I've tried drinking massive volumes of water before, and saw a relatively positive effect, this seemed like an easy one to check off my list.

I finished one bottle of water between the time I got through security and boarded the plane, one bottle while sitting on the plane, plus many, many cups of water from the stewardesses, and then one bottle afterward, filled up at the water fountain underneath this encouraging sign at Beijing International Airport. This Nalgene holds 650 milliliters, so between the three bottles and several cups, I definitely hit my two liter goal during the flight. I didn't see any direct impact on my skin, but I felt good when I got off the plane, despite having only slept for a couple of hours.

My skin was not clearer after testing out this multistep skincare routine, but my face wasn't any more irritated than it was before I stepped on the flight, which was a first. I was also relieved that I didn't feel totally grimy after getting off of an airplane despite the lack of sleep, another huge success.

Though I was skeptical at first, I think I'll be taking some of these tips along with me in the future, albeit a heavily downsized version. I would only bring the face wipes, the lip balm, and the heavy moisturizer. The sheet mask, although pleasant, felt like overkill once I had worked in the moisturizer, and the face oil also felt totally redundant and did more harm than good. (I should've trusted my instincts with that one.) I also didn't love the hydrating spray; I'd rather just walk to the bathroom and splash my face with water.

Of course, this is the combination that I think will work best for me and my oily skin. Perhaps some other combination of these products will be your ticket to perfect post-flight skin. It'll take some trial and error, so don't let your fear of looking like a weirdo on a flight with strangers get in the way of finding what works for you on your next long haul flight.

If all else fails, remember to stay hydrated while you're sailing through the skies.