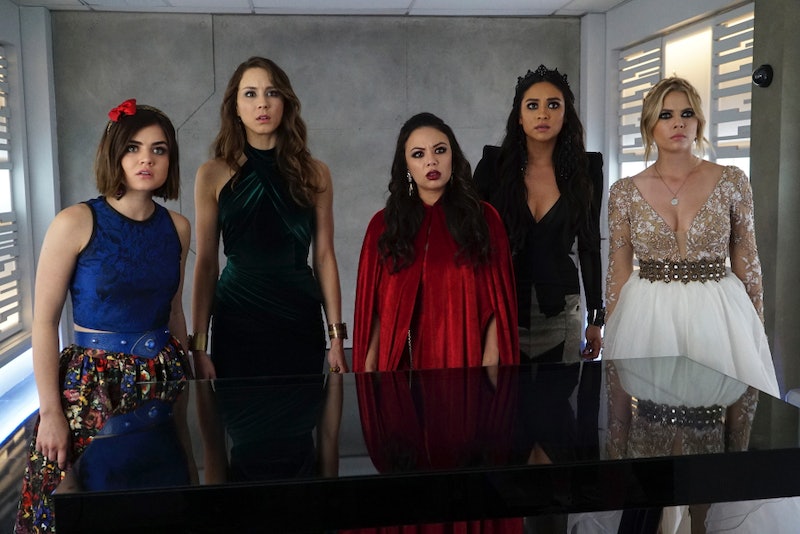 One of the many reasons it's so easy to become addicted to Pretty Little Liars is thanks, in large part, to its uncanny ability to knock us for a complete loop on a weekly basis. Just when you think you have things kinda sorta maybe figured out, the writers throw another curveball into the mix as if to say "Nope, try again please!" Yes, this ABC Family series has delivered a barrel full of PLL shocking moments throughout the years that have kept us on the edge of our seats and made us even contemplate checking ourselves into Radley from the sheer stress of it all. However, just like everything else in life, there were certain some moments that packed a stronger shock punch than others.

Sure, our jaws have dropped to the ground more times than we can count throughout these past five-plus seasons, so choosing between them can seem almost downright impossible. But that's not to say that it can't be done, which is why I've taken the liberty of ranking what I personally believe to be the most shocking PLL moments of all time, from least surprising to full-on panic attack. Because, no matter how much time has gone by, we're guaranteed to take these earth-shattering reveals to our grave.

15. When Alison Is Alive

We all kinda figured this would happen sooner or later, but that didn't stop Alison's return to the land of the living from being any less squeal-inducing.

14. When Jason & Spencer Are Revealed To Be Siblings

Proving once and for all that the Rosewood parents could go toe-to-toe with their children in the drama department. Scandalous!

And Emily's emotional breakdown was all of us. RIP.

12. When Jessica DiLaurentis Is Killed

The Hastings lawn will never be the same.

11. When The Liars Get Tortured In The Lair

Which was shocking on both a literal and figurative level. (Too soon?)

10. When Paige Tries To Drown Emily

I'm not entirely sure what's more disturbing — the act itself or the fact that we were supposed to just somehow forget that this ever happened and go on rooting for their relationship.

Just when you thought dating a student would be the worst thing he'd ever be accused of.

8. When Ezra Gets Shot

Sure, he's done some pretty shady things, but that didn't make his potential demise any easier to endure. You couldn't help but hope for him to pull through.

7. When Caleb Gets Shot

Because when Caleb hurts, so does the rest of the world. MAKE IT STOP.

6. When Sara Harvey Is Both Red Coat & Black Widow

We knew Mona was clever, but it wasn't until now that we realized just how clever.

I'll never be able to un-see that pale, dead face looking out at us from A's trunk.

If your mind didn't explode during this moment then you're clearly watching the show wrong.

Because the only thing worse than Toby playing for the A Team, is Toby being dead.

And the fact that it really wasn't Wren.

More like this
Here's What Jeffrey Dahmer's Dad Has Said About His Other Son, David
By Grace Wehniainen
Where Is Lionel Dahmer Today? Jeffrey Dahmer’s Father Reflected On The Serial Killer’s Death In 2020
By Brad Witter
If 'Entergalactic' Season 2 Happens, You Could Get A New Kid Cudi Album
By Kadin Burnett
'Reservation Dogs' Season 3 May Finally Mend Bear & Willie Jack’s Relationship
By Gretchen Smail
Get Even More From Bustle — Sign Up For The Newsletter