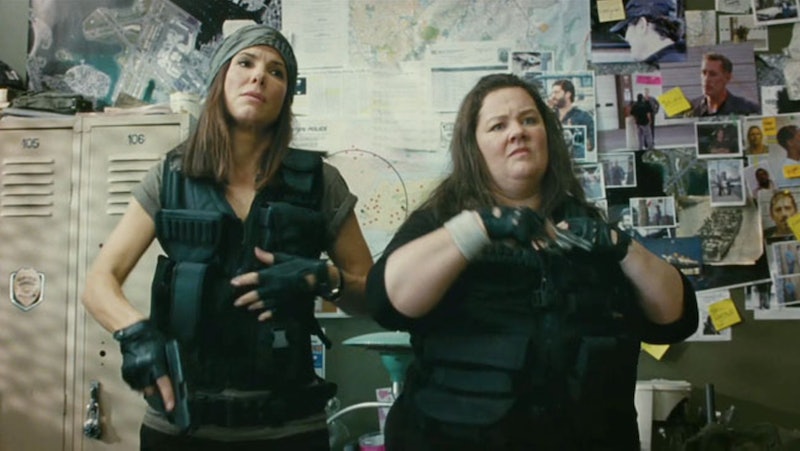 A female buddy-cop flick? It's been way too long. (Well, maybe about as long as Miss Congeniality 2, if that counts.) The Paul Feig-directed feature premieres June 25, but before we all rush to the the theater to see Melissa McCarthy and Sandra Bullock play odd-couple, let's check out what the critics are saying.

Paul Feig of Bridesmaids directed this buddy comedy. Was he able to bring the magic he had last year into this summer blockbuster?

"Feig, who got his big break creating Freaks and Geeks 13 years back, no doubt owes much of his approach to Apatow, his fellow Geeks exec producer. It certainly shows in the improv-heavy film’s tendency to run longer than the material demands, as well as the generally shaggy way the funniest subplots get the most screentime (how many sports-themed Jesus paintings can one pic support?), while others dead-end entirely: Despite great lengths taken to bug a criminal’s cell phone, the two cops never bother to listen in on his calls." —Peter Debruge, Variety

"Given the pedigree of talent involved in front of and behind the camera, it's a shame The Heat isn't funnier. It employs every buddy cop movie cliche, but never does anything new, clever or truly amusing with any of these tropes." —Jim Vejvoda, IGN

"Disappointingly to those who might be expecting something more sophisticated from Feig, The Heat is a lot closer to Identity Thief than to his own previous work in that it depends inordinately on the amusement value of McCarthy making a brash, bad-ass spectacle of herself, shoving people around, telling them off, bullying everyone in sight and generally using her bulk and bad attitude to get her way." —Todd McCarthy, The Hollywood Reporter

On Melissa McCarthy and Sandra Bullock...

McCarthy killed it in Bridesmaids and Bullock forever seems to be donning a badge and a gun... so, how does their dynamic play out here?

"Even as Bullock recycles a comedy of incompetence that felt tired by Miss Congeniality 2, McCarthy approaches this project like it’s a creative masterpiece. Every foul-mouthed joke she cracks, every unexpected physical gag she underplays, is so funny you forget how often we’ve seen this setup. Or, when it comes to women, how rarely." —Elizabeth Weitzman, NY Daily News

"While McCarthy and Bullock have great chemistry and are clearly having a blast together, the movie itself offers nothing but odd couple clichés with heavily telegraphed payoffs. " —Jim Vejvoda, IGN

"Whereas McCarthy flourishes in an ad lib-friendly environment, Bullock is stuck playing straight woman. It’s impossible to forget that Bullock is merely pretending to be unlikable and robotic, as if the filmmakers had a stern, Clarice Starling-style character in mind, where she easily could have played a charismatic desk jockey who simply wasn’t accustomed to field work. By contrast, McCarthy easily disappears into her role, to the extent that it’s tricky to distinguish where [her character's] personality ends and the actress’s begins." —Peter Debruge, Variety

Kate Dippold is one of the youngest and most sought-after new writers in Hollywood. How did her first feature do?

"Where another script might have treated the gender dynamic strictly as subtext, Dippold grapples the issue head-on, conceiving multiple scenes in which Ashburn and Mullins must justify themselves to a hostile, all-male workplace. In stakeout mode, they quickly run afoul of two misogynist DEA agents (Dan Bakkedahl and Taran Killam), whose insults are trumped by the fact that one of them is albino — perhaps the last minority unprotected by political correctness. Mullins doesn’t take guff from anyone. In the office, she retaliates against an unsupportive boss by conducting a hilarious, humiliating search for his missing “mouse balls.” And whenever shots are fired, chances are she’s aiming for the perp’s crotch." —Peter Debruge, Variety

"There’s nothing new about Katie Dippold’s script, which — aside from the now-requisite jokes about ladyparts — feels like a retread of countless movies to come before it." —Elizabeth Weitzman, NY Daily News

So, can we forgive a lackluster plotline in favor of watching McCarthy and Bullock as a crime-fighting duo? Are the critics right in saying that the comedic cop film is overdone, regardless of the gender of its police?

"The pace of the film is uneven, and the big plot-points are presented so casually that you can almost feel how bored everyone is by having to spend time on them, but Bullock and McCarthy make a phenomenal team. The conversation never stops. The arguments never stop. You can forgive a lot if a film shows you watchable, interesting characters." —Sheila O'Malley, Roger Ebert.com

It's not too often we get to see two of our favorite leading ladies taking on roles commonly reserved for the Channing Tatums of the world. If McCarthy and Bullock can keep up the level of likability they've illustrated to us over the years, The Heat is bound to be a success... if not in the box office, than in encouraging more studios to make films with women in comedy roles.

More like this
Sandra Bullock, Girlboss Extraordinaire
By Matt Harkins & Viviana Olen
Laura Dern Said “Cultural Awareness” Made Her Rethink This 'Jurassic Park' Fact
By Grace Wehniainen
The 'Hocus Pocus' Sequel Finally Has A Release Date & It Makes Total Sense
By Shannon Barbour and Radhika Menon
Colin Firth Revealed His Favourite Mr. Darcy (& No, It's Not Himself)
By Sophie McEvoy
Get Even More From Bustle — Sign Up For The Newsletter