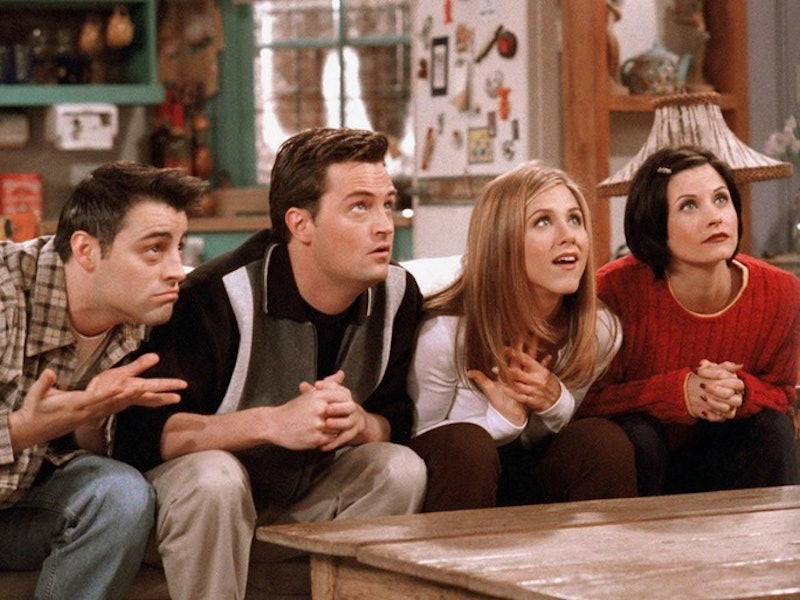 I'm the type of person who likes having options. Everything is just a bit better when you have choices. However, having too many choices can come back to bite you in the rear. Having 236 options, for example, makes choosing one nearly impossible. Say, for example, with Friends. The complete Friends collection has 236 episodes which means that picking a favorite Friends episode is exceptionally difficult. If you forced me to choose (or assigned me an article that forced me to choose) though, I'd have to say that "The One With The Embryos" is the best episode of Friends and I intend to prove in the following breakdown of the episode.

In case you're not able to recall what happens in a Friends episode immediately upon seeing the episode title like I am (a.k.a. in case you're not a giant freak), let me remind you. "The One With The Embryos" is the episode of Friends where Phoebe gets Alice's embryos implanted in her uterus, Monica and Rachel play Joey and Chandler in a game of trivia about each other (in which the girls' apartment and the chick/duck are a part of the wager), and the chick blossoms into a strapping young rooster.

My intention is to walk you through this episode point-by-point to emphasize the pure beauty and perfection of this episode. Take a walk down memory lane back to the days of Season 4 as I deconstruct "The One With The Embryos" and make the case that it's the best episode of Friends ever.

It's a new day, the sun is shining, and the girl's apartment is clean. Monica and Rachel are abruptly awaken from what I can only imagine is a restless slumber as they have nightmares about what it would be like to live in a normal-sized New York City apartment. Monica and Rachel hear a fowl noise and march over to the boys' apartment. Rachel bangs on the door and is all "WHO DISTURBS MY SLUMBER" and Chandler shares that the chick is going through some changes and she's not a girl, but not yet a rooster.

Phoebe is going in to have her endometrial layer checked to see if she's ready for embryo implantation. Ya know, so Phoebe can have her brother's babies, a decision she made partially out of a sense of selflessness but mostly so she can one-up everybody when sharing personal facts during icebreaker games (I would assume). Chandler offers to check her endometrial layer for her because, you know, he's so damaged and edgy that he can make jokes like that.

Joey and Monica bust through the door in the middle of a not at all staged argument in which Monica is pissed the Joey guessed that she was in her granny panties since today is her laundry day. Joey and Chandler then provoke Monica and Rachel into a heated debate about who knows whom (you're welcome, Ross) better which escalates into a bet. Let the fun begin.

Rachel and Monica bet that they will beat the boys in a trivia game. If the girls win, J. Man and Channy get rid of the chick and the duck (which, in retrospect, is kind of a messed up bet). If the boys win, they get to move into Monica and Rachel's apartment.

The Embryos Begin Their Journey

Whilst all this is going on, Phoebe is getting a flock of embryos shoved up her uterus. She gives the embryos a tender pep-talk before they embark up into her lady oven. She tells her tiny petri dish full of embryos:

Hello, tiny embryos. Well, I’m-I’m Phoebe Buffay, hi! I’m-I’m-I’m hoping to be your uterus for the next nine months. You should know, that we’re doing this for Frank and Alice, who you know, you’ve been there! Umm, y’know they want you so much, so when you guys get in there, really grab on. Okay, and-and I promise that I’ll keep you safe and warm until you’re ready to have them take you home, so… Oh! And also, umm next time you see me, I’m screaming, don’t worry, that’s what’s supposed to happen.

If you didn't just tear up a little bit, I judge you.

Meanwhile, Frank and Alice are, as usual, weird enough that Phoebe seems normal by comparison (no small feat) and Phoebe is told that their life savings has just nestle into her uterine lining. No pressure, right Phoebs?

Back at the apartment, Ross has taken a break from being everyone's least favorite character to host trivia because, as he so astutely points out, it's not like he has a son to take care of or anything. A number of hilarious questions are asked and answered. Monica, neurotic freak that she is, has 11 categories of guest towels. Chandler is afraid of Michael Flatley's Lord of the Dance. Who can blame him, "his legs fly about as if independent from his body!" Chandler's gay burlesque name errrr I mean the name on his TV Guide is Miss Chanandler Bong. Solid gold all around and there is something so entertaining and endearing about the trivia game in this episode that just catapults this ep to the top of my list of favorite. The way that Monica screams in agony when the girls lose due to their lack of knowledge about Chandler's job makes me physically LOL every time it happens.

Phoebe Tries To Be Fertile

Phoebe comes back, uterus jam packed, and lounges upside down to promote fertility. Phoebe's pregnancy journey is the most tender part of this episode's storyline. Alice and Frank Jr.'s hopeful but nervous glee at the thought of getting to have children, as well as Phoebe's fear that her body won't cooperate with the implantation, really provides a nice juxtaposition against the no-holds-barred fun that the rest of the gang is having in the apartment.

Monica and Rachel (mostly Monica) is distraught at the idea of losing their apartment. However, as Joey so astutely reminds her, it's a bet and "...you bet on a bet and if you lose, you lose the bet." Duh, Mon. Monica tries to engage the boys in new bets but they'd much rather ride off into the sunset on their rolling white dog statue, rubbing their win in the girls' faces as they sail away.

Phoebe gets back from the doctor and reminds the rest of the gang what serious issues and concerns look like as she frets over the less-than-stellar odds for conception. As Phoebe notes, Frank and Alice are "literally putting all of their eggs in [her] basket." But like, literally.

Monica and Rachel continue to whine about having to move. I'm like, hey ladies, a bet's a bet. Quit your yapping and get out. Even though it is a giiiiiirls apartment and it's so preeeeetty, Joey and Chandler have no trouble taking over and settling in with all of their ugly boy furniture. Cue the plates falling in between the cracks of the foosball table they use as a dining room table.

In the ultimate climax of the episode, Frank and Alice swing by with a pregnancy test for Phoebe. After a quick jingle about her potential fetus, Phoebe takes the test and, much to everyone's delight, announces that she is indeed pregnant, prompting the most hilarious line of this vaguely incestual episode as Frank Jr. screams "MY SISTER'S GONNA HAVE MY BABIES!"

Everyone celebrates and hugs. All is well. Rachel and Monica concede and move in with their new insect roommates while Chandler and Joey lounge orgasmically in their fugly chairs. The End.

This episode is equal parts tender, quirky, and hilarious, balancing its lighthearted frivolity with the bigger picture issues. 10/10 would watch again (clearly, since I can't seem to stop watching or talking about this episode).