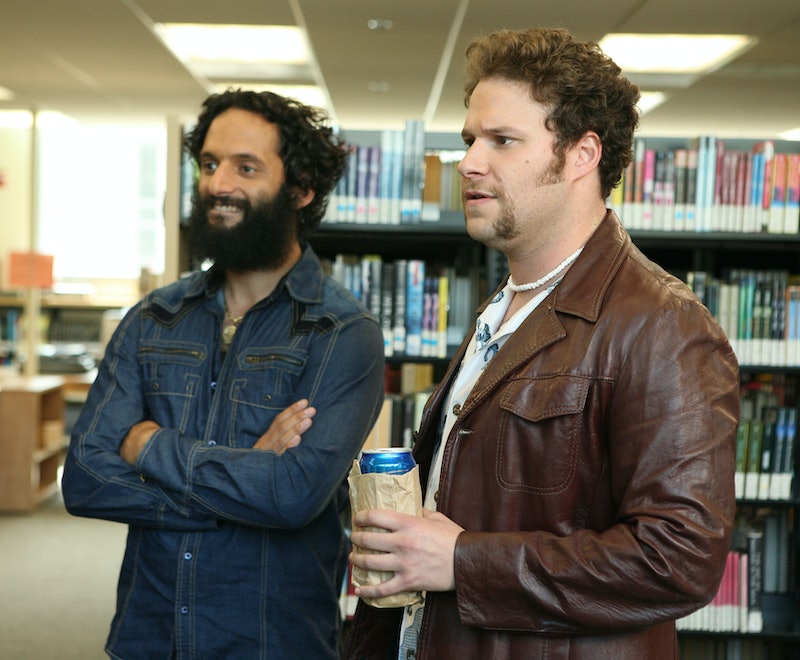 FX comedy The League picks teams for its seventh and final season on Wednesday night. But the series isn't going out without one last spree of disgust, terror, and all manner of illegal things with fan favorite characters Rafi and Dirty Randy. The upcoming episode will mark Seth Rogen's third appearance on The League , playing the devil on the shoulder of Jason Mantzoukas' already impressively immoral character. Past Rafi and Dirty Randy-focused episodes have set the two outside of the regular action; this time around, producer Jackie Schaffer told Entertainment Weekly, they'll be interacting with the full League ensemble. So, when does the final Rafi and Dirty Randy episode of The League air?

No official airdate or episode title has been announced yet for what's essentially the gross-out comedy event of the fall. IMDB currently lists the titles, synopses, and casts lists for the first two episodes of the season, neither of which include Rogen. Season 7 of The League should consist of only 13 episodes though, meaning that Rafi and Dirty Randy will set about their one last ride — which Schaffer described as "practically inhuman" — sometime this fall. This is good news, in my opinion. You can't just jump straight into one of these tales of death, destruction, and mutual masturbation. A warm up is necessary. Or a gradual descent into their range of perverted madness, at least.

Last year, Mantzoukas talked to The Daily Beast about getting into that Rafi headspace and the freedom those characters have to truly be the worst people on television.

We’ve done some really terrible stuff. If you think about it, the fact that there are two characters who routinely commit wanton acts of murder, revenge, vigilante justice, possibly-consensual pornography on what is ostensibly a normal sitcom about guys who play fantasy football is pure madness.

Jason is hilarious and insane...He truly pushes things farther than anyone I’ve worked with. The character is just the worst dude ever. No limit to the grossness.

Rogen and Mantzoukas also collaborate in the writing of these episodes, though some of the most shamless and vulgar ideas don't come from the script. Mantzoukas told The Huffington Post that the Rafi and Dirty Randy outings include even more improvisation than a regular League episode.

The way it works is we write, like, an outline for the story of the episode. And then we just come in with all these great people, and improvise all the stuff. So, it's really fun, you know, in terms of assembling a group of funny guys and just going crazy.

Dirty Rafi and Randy will ride again on The League soon. The question is: will decency and dignity survive? I wouldn't be surprised if characters themselves go out in a blaze of repulsive glory.