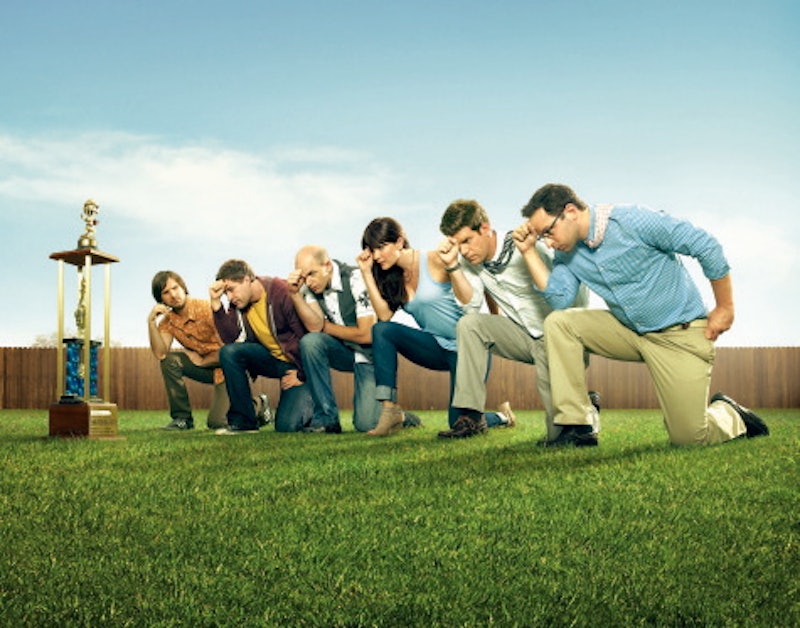 On Wednesday night, Kristin Cavallari appeared for the second time on The League, and I doubt many other viewers appreciated it the way I did. A dirty, completely insane comedy about a fantasy football league, the FXX show probably doesn't have many Laguna Beach fans in its audience, especially since it doesn't have many female viewers.

The Season 5 premiere on Sept. 4 was extremely popular — among men. It performed better than last year's premiere on the larger FX network — among men. It even beat the major broadcast networks that night — among men. But where are the women who love dirty comedy, and why aren't they watching The League?

Whether or not you like football, you can watch The League. It's not quite Friday Night Lights, a series that can safely lead me to say, "It's not about football! It's about the people." The League is about football, and there's no getting around that, but it doesn't really matter. As long as you like humor, you're good. And if you do like football, what have you been waiting for?

But what about those claims of sexism, you ask? The League is offensive, but the series is an equal opportunity offender. Men, women, humans of all shapes and sizes — everyone serves as the butt of jokes on the series. Don't believe me? Then read Slate's take on the question of sexism within The League — yes, there are stereotypes on the series, but you're supposed to shake your head over them. (As for that closing statement: "The acting is good enough to make me keep hoping against hope that The League’s protagonists will turn out to be better people than they are." I'm hoping for the opposite — that's half the fun.)

Still don't believe me? Well, it's definitely worth noting that the show is executive produced and often written by husband-and-wife team Jeff Schaffer and Jackie Marcus Schaffer. The lack of women on comedy writing staffs is a highly touted statistic, but this comedy, dominated by men onscreen, at least has some female representation behind the scenes.

Of course, what goes on in the writing room doesn't matter too much on The League, where almost everything is improvised by its amazing cast. Made up of Mark Duplass, Stephen Rannazzisi, Nick Kroll, Paul Scheer (who we've already shared our love for), Katie Aselton, and Jon Lajoie, The League's writers reportedly give them an outline of a scene and general story arc, and just let them go for it. The results are amazing. Watching The League is essentially watching a group of friends mercilessly mock each other, using whatever material they can get their hands on. And, ladies, if you've ever wanted to mock a TV character, then you're a natural fit to join The League.

But if there's one solid reason why you should watch The League, it's Rafi. Introduced in Season 2 as the brother-in-law, a.k.a. Brolo el Cunado, of Kroll's Ruxin, Jason Mantzoukas steals every single scene. The following video is four minutes worth of Rafi and doesn't even make a dent into his best moments.

So you're finally convinced, right? But you haven't watched the first four seasons. What now? Never fear — The League is the kind of show that you can jump into at any time. And if you really want to feel caught up, Seasons 1 through 4 are also available to stream on Netflix. So, come on, ladies: Let's see if The League can garner impressive ratings in the female demographic for a change.