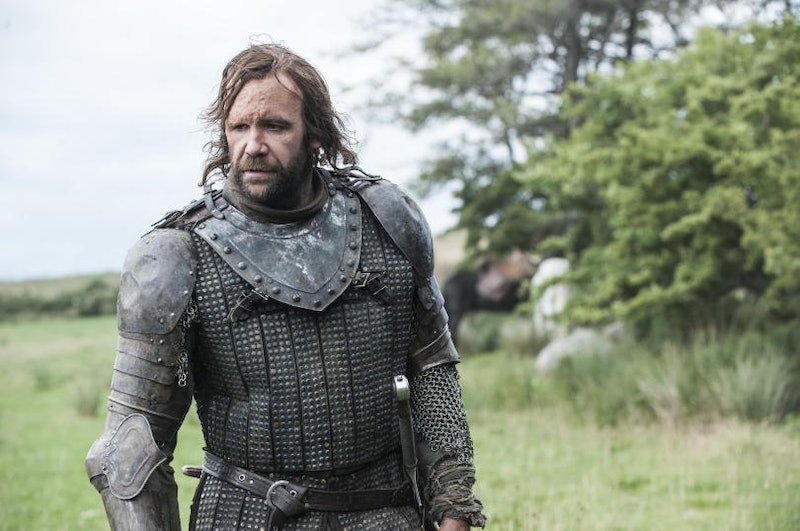 Many lives were left hanging in the balance when Game of ThronesSeason 5 aired its finale. We may be certain that Sansa Stark and Theon Greyjoy survived their suicidal jump off the ramparts of Winterfell, but fans of the HBO series are still questioning whether or not Jon Snow will be resurrected and what fate awaits Stannis Baratheon. But there's another important life we should be worrying about. I know it seems like straining credulity at this point to insist that another presumed-dead Game Of Thrones character is still alive — but that's exactly what I'm about to do. At the end of Season 4, Arya left Sandor Clegane for dead after a brutal combat with Brienne of Tarth. And, although we didn't see The Hound in Season 5, there are plenty of hints that should have any fan wondering will The Hound return for Game of Thrones Season 6?

The first indication that the Kingsguard-turned-mercenary played by Rory McCann might be returning comes from author George R.R. Martin himself. In A Feast For Crows, while Brienne and Podrick are scouring the Riverlands for Sansa, they come across a man named Septon Meribald, who claims to have personally witnessed The Hound's death. The man takes them to his septry, where a huge, hooded novice with a limp is digging a grave. Most readers assume that this new arrival at the Quiet Isle is none other than Sandor himself, and that the death Meribald spoke of was metaphorical — that "The Hound" died, but Sandor Clegane lives on.

The second indication came when the first casting calls for GoT Season 6 were announced. These notices included a part referred to simply as "Priest," who's described as, "a no-nonsense rural priest who ministers to the poor of the countryside." The popular assumption is that this priest is Septon Meribald — and if his small part is being included, then it's probably to set up Sandor's "resurrection." The final hint came last month, when GoT fan site Watchers On The Wall reported that McCann had been spotted in Belfast, where filming for Season 6 is currently underway and that he was staying in the same hotel as all of his former GoT cast mates.

Once you connect the dots, it becomes pretty clear that we haven't seen the last of The Hound. So, what should we expect if he makes a comeback in Season 6?

1. An Appreciation For Silence

Not exactly a man of many words, our Hound. And, if he does come back as a grave-digging novice, he'll be even more taciturn than usual.

2. Prodigious Use Of The Word "Girl"

It's about the only word he does love. That, and a bunch of four-letter words I can't type here.

It's hard to imagine any holy vows getting between Sandor Clegan and a nice cup of mead.

Keepin' it classy as always.

Arya tends to bring out Sandor's pitch black sense of humor. Here's hoping they meet up again somewhere in the Riverlands next season.

Sandor Clegane sure does love his little birds...

Chickens will be devoured.

Now that most of the Lannisters are dead and/or scattered to the winds, the Cleganes will have to stand in for most dysfunctional family in Westeros. Big shoes to fill, I know.

For those unfamiliar with this particular meme, "Cleganebowl" refers to a highly anticipated (and entirely hypothetical) event to come in Martin's Song Of Ice And Fire series, in which the two Clegane brothers finally meet in mortal combat. With The Hound and The Mountain both having apparently met their doom in Season 4 (via Brienne and Oberyn, respectively), some fans were disappointed that this clash of titans would never take place. However, now that Gregor has been reanimated into some sort of FrankenMountain by Qyburn and rumors of Sandor's return are gaining steam, Cleganebowl seems all but confirmed.

Since Cersei has chosen Ser Robert Strong (the Mountain's new alias) as her champion in her upcoming trial by combat, the Faith will have to appoint someone to fight on their side. Who better than a new recruit to the Seven who's not only a skilled warrior, but has a personal bone to pick with Cersei's champion? Expect Season 6 to culminate in a showdown the likes of which Westeros hasn't seen since the Mountain smashed the Viper's head into a bloody pulp. (Except hopefully with a happier ending...)