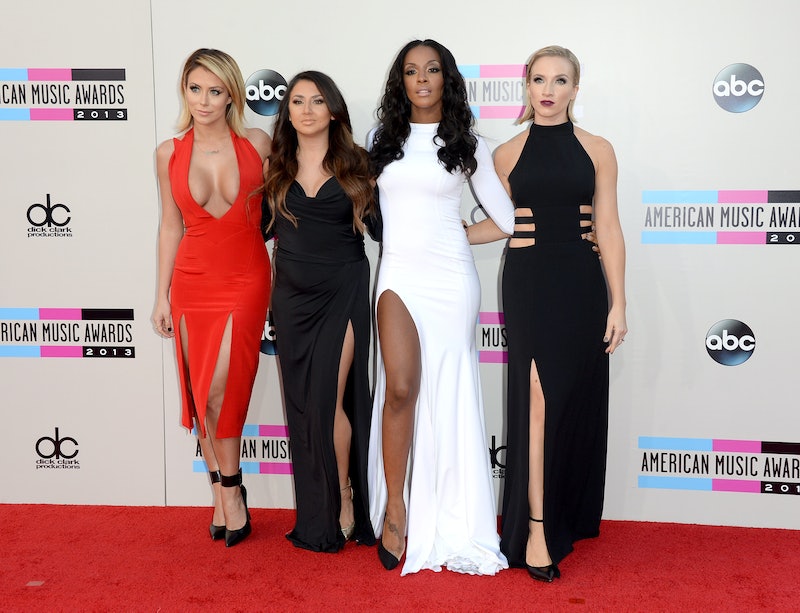 It's happening. It's really happening! Monday night, Danity Kane performed for the first time in five years (aside from a cappella snippets like this). The reunion show went down at the House of Blues in Los Angeles. WAIT A DAMN SECOND. They performed in L.A. and no one paged me? No one sent a "FYI DK IN TOWN 2NITE" text my way? I could've been there in 30 minutes. Eh, maybe 40. I'd probably want to throw on some eyeliner first.

As you may know, the all-female pop group was assembled on Making the Band back in 2004 (whoa) and broke up in 2009 (NO). But in May 2013, four of the five original members of Danity Kane were spotted at Maggiano's in Los Angeles. They were strategizing a Danity Kane reunion. I tried to keep my excitement in check. Reunions can be disappointing, I reminded myself. However, when DK officially announced their reunion at the 2013 VMAs, my emotional side took over my rational side. I was so happy and nothing could squash my joy. I believe I said, "it's going to be the greatest reunion ever and don't you dare say otherwise." Everyone I was with nodded nervously/politely.

They also tackled Madonna's "Like a Virgin" and Prince's "I Would Die 4 U." I'm down. Awesome jams. But the big cover of the night: "Wrecking Ball." No, not Aubrey O'Day's single from 2012. The Miley Cyrus mega hit. The song that I've yet to tire of. The song that made me cry in front of a bunch of kids at Jingle Ball. Sorry, everyone who sat next to me at that concert. I should've warned you ahead of time.

Enough about me. How's the DK "Wrecking Ball" performance? It's good. It's really, really good. They can sing, duh. Anyone who watched Making the Band knows Aubrey O'Day, Dawn Richard, Aundrea Fimbres, and Shannon Bex are the real deal. Check it out:

Do I love this acoustic performance more than Cyrus's version? Oof. I'm afraid to answer this. Please don't throw things at me, but no. I don't. Nothing against DK. I'm all about DK. Like I said, they sound gorgeous. The harmonies are solid. But whenever I hear a cover of this song, I can't help but wish I was listening to the original version. I just love it so much. Honestly, Celine Dion could be singing "Wrecking Ball" alongside DK and I'd probably be like, "but what about crying cat Miley? What about crying Kristie? MORE TEARS!" I know, I know. I'm a joke of a human.

So no, the video didn't wreck me (oops. Couldn't help it). As beautiful as their voices sounded, the performance didn't serve up the intense level of emotion I need from that song. Or crying cat Miley. Ugh I feel like I'm blaspheming against DK. I promise that I am not taking the reunion for granted! Please don't take it away from me! I don't mean to be a jerk who ruins everything! Uncle Frank, go ahead and say what I deserve to hear:

More like this
Everything To Know About Taylor Swift’s 10th Studio Album, 'Midnights'
By Grace Wehniainen and Jake Viswanath
Twitter Is Freaking Out Over Rihanna’s 2023 Super Bowl Halftime Show Announcement
By Stephanie Topacio Long
Even If She Tried, Beth Ditto Couldn’t Stay Away From Music
By Ivana Rihter
What Demi Lovato Really Thinks About Child Stardom, Depression, & Sobriety
By Radhika Menon
Get Even More From Bustle — Sign Up For The Newsletter