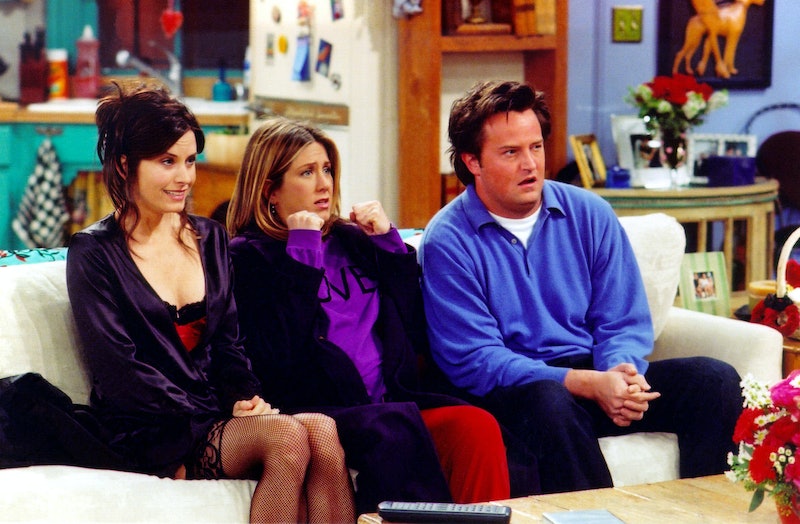 On any given evening when I have free time — weekdays included — you can find me in one place: With my friends. But it's not because I have a busy social calendar, it's because I have a Netflix account. As far as I can tell, watching Friends is far better than actually having any... most of the time.

Of course, there are a lot of things that fictional (or so they say) TV characters can't do that real friends can, like hug you when you're having a bad night, go out for drinks on your birthday, or ask you how your day has been. But sometimes, a lack of interaction can be a very good thing, and that's where my pals from The West Village come in. I don't know about you, but there are certain times I just want to chill, drink a glass of wine, and not deal with the people who care about me asking me questions I don't want to answer. You know who never pries into my personal life? Chandler Bing.

If you find yourself referencing something funny Phoebe said the other day in casual daily conversation or wishing you could borrow that top Rachel wore in Season 8, you probably understand exactly what I'm talking about. And even though hanging out with real friends can be great, sometimes, there's only one thing to do: Order a Joey special (two pizzas) and settle in with the gang at Central Perk, because...

1. They Never Let You Down

The Friends are incapable of disappointing you. Except for Ross, because his decisions are pretty questionable sometimes. And why doesn't he hang out with Ben more?

2. They're Free Whenever You Are

The only time you want to hang out is at 10 a.m. or after midnight? No prob. Netflix (and DVDs, for that matter) is around 24 hours a day, just waiting for you to press play on whatever episode you feel like watching. If you're having a particularly bad day, I strongly suggest "The One in Massapequa."

3. They're Funnier Than Real People

I have never met a single person in the world who can make me laugh as hard as Joey does. Or Chandler. Or Monica, if you get her in the right scene.

4. You Don't Have To Leave The House To Hang Out With Them

Ever feel like canceling plans because you can't be bothered to get out of bed and take a shower? It's a non-issue.

Seriously, they will hang out with you no matter what you're wearing. But if Rachel was real, she'd probably have something to say about it.

6. They Understand Everything You're Going Through

Probably because they've been through it first — or worse. Bad breakup? It's fine, Ross has been divorced, like, 11 times. Can't figure out what to do about the cheesecake you found, untouched, on your neighbor's stoop? They've got a solution for that one, too.

7. They Don't Judge You For Your Bad Decisions

Real friends have a way of making you feel guilty when you do something you know you shouldn't have done, but your Friends will allow you to wallow in your own pit of dysfunction for as long as you want, no questions asked.

8. Their Drama Is Always Worse Than Yours

Don't get me wrong: This is a beautiful, successful group of people, but sometimes, their lives are really messed up. Chances are, your real life is in way better order than most of these people's. It's a self-esteem boost!

9. They'll Be There For You

They even say so in the theme song.