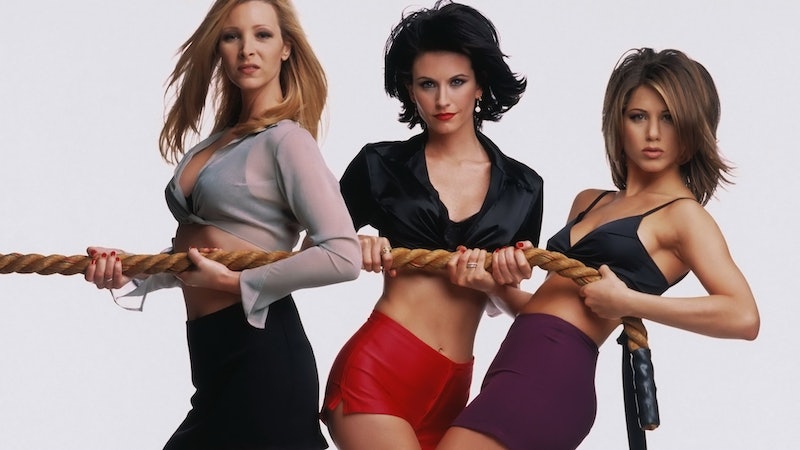 By now, you are almost certainly most-definitely singing the Friends theme song by The Rembrandts in your head. And if you aren’t? Well, then I commend either your control over ear worms or your ability to remain under a cultural rock — because Friends has arrived on Netflix.

And we're sure happy it is, because Friends just might be the perfect sitcom: it was the essential multi-cam network TV show of the '90s and early 2000s. It was about six 20-somethings living in New York, but mostly, it was about your friends becoming your family as you navigate the realities of adulthood. It had a little bit of everything you want from a sitcom: hot, young people trying to figure out their careers, relationships, sex, and the housing market of New York City. It may not have been the most diverse, edgy, sexy, or clever show — but it was so. damn. funny.

Even though Friends was pretty PG show most of the time, it had a secret, beautiful feminist core that really came through sometimes. Here, we take a look at the nine most feminist things about Friends — which was actually, as it turns out, way more progressive than you probably realized.

This was literally the first episode of the entire show. Rachel left her boring, dentist husband and financially-secure lifestyle in Long Island on their wedding day in order to pursue an independent life in New York City. It’s nothing that radical, but Rachel’s self discovery and struggles to find independence were inspirational.

The One Where Monica Considered a Sperm Bank

Monica’s break up with Richard really hurt — they were perfect for each other — but they wanted different things in life. Monica was ready for a family, and she was unapologetic about it. She wouldn’t compromise her dream just to be with Richard, and she was so ready for a baby that she even considered going to a sperm bank and raising a child on her own. The fact that she was seriously considering it was one of the most independent moves she (almost) made.

The One Where Rachel Found Out She Was Cheated on With Her Friend Mindy ... and They Teamed Up

Whenever guys cheat, it’s way too common for women to blame the other girl and not the guy. But when Rachel and her ex best friend Mindy teamed up to roast her ex fiancé Barry for cheating on both of them, we were reminded that cat fights were so '80s.

The Fact That Ross' Son Had Two Moms

Sure, there were some highly-problematic jokes, but Ross’s ex-wife and her new partner, Carol and Susan, were still the totally accepted parents of Ross and Carol’s son Ben. No one ever questioned that the two women raising a child were doing a great job.

The Fact That Monica Was Competitive as Hell, and Better Than Everyone at Football

Monica’s go-getter attitude is a chief element of her personality. She is tough, assertive, bossy, and relentlessly competitive with everyone about everything. Which translates to being better than everyone at a lot of things — including football.

The Fact That Rachel Chose To Be a Single Mother

When Rachel got pregnant, she turned down marriage proposals from both Joey and Ross. Being married and having a family don’t necessarily have to be connected, and Rachel was the hottest single mom on network television, and everyone respected (and applauded) her decision.

The Fact That Monica Was The Boss

Monica’s coworkers and subordinates were constantly undermining her and calling her a bitch — an experience almost every girl boss has had to deal with, especially in a kitchen and food service, which is a total boy’s club. It was awesome to see her take charge of her employees and work environment — and not care what people called her.

The One Where Monica Proposed to Chandler

In one of the most beautiful moments in the show, Monica asked Chandler to marry her on bended knee. She didn’t wait around for her knight in shining armor — she grabbed him herself.

The Show's Depiction of Female Friendship

More than anything, Phoebe, Monica, and Rachel were there for each other through everything — competition, break ups, hookups, marriage, and children. They were supportive of each other and always had fun. And when women stick together, feminism wins.