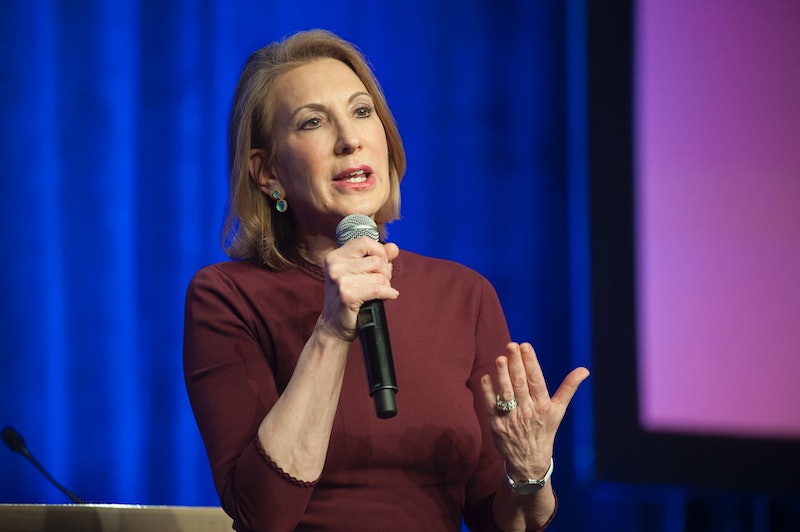 Despite being the first GOP candidate to hit over 30 percent approval in a recent CNN/ORC poll, Donald Trump is still sweating the small stuff. For example, he has yet to give up his fight against fellow candidate Carly Fiorina, making a string of incredibly offensive comments about her physical appearance in a Rolling Stone interview. Rather than using the sexist jab as an opportunity to fight back, however, the former HP CEO has refused to engage in his latest insults. So, is the Donald Trump-Carly Fiorina feud over? Maybe for Fiorina, but not if Trump has anything to say about it.

In typical Trump fashion, the Republican front-runner had this sexist quip to offer about Fiorina in Rolling Stone:

Look at that face! Would anyone vote for that? Can you imagine that, the face of our next president?! I mean, she’s a woman, and I’m not s’posedta say bad things, but really folks, come on. Are we serious?

The two candidates have been at war with each other for well over a month. Their extensive feud has reached well beyond the realm of politics. Both candidates have insulted each others' business acumen and the fight heated up even further following Trump's comments about Megyn Kelly. Fiorina was quick to defend the Fox News journalist and called Trump "inappropriate and offensive."

This isn't the first time that Trump has lashed out against Fiorina, either. In a tweet from Aug. 9 — way back around the time their feud began — Trump claimed that she would never get elected simply based on her voice.

At the time, Fiorina was quick to insult the candidate and had even done so during the first GOP debate, criticizing his alleged friendship with former president Bill Clinton as well as Trump's change of heart on key issues. Even though she could have taken Trump to task once again, Fiorina chose instead to look at the political race ahead, effectively ending the war of words.

The Republican presidential hopeful had this to say about Trump's latest attack during her Wednesday night appearance on Fox News' The Kelly File:

Well, I think those comments speak for themselves and all the many, many thousands of voters that are helping me climb in the polls out there. Yes, they're very serious. ... I'm not going to spend a single cycle wondering what Donald Trump means. Maybe, just maybe, I’m getting under his skin a little bit because I am climbing in the polls.

Trump went on to defend his remarks despite the fact that Fiorina is clearly done trading insults with him. During a Thursday morning interview with Fox & Friends, the Donald gave this bizarre explanation for his comments that clearly sound like petty attacks on Fiorina's appearance:

I'm talking about persona, I’m not talking not about looks. When I get criticized constantly about my hair, nobody does a story about ‘Oh, isn’t that terrible, they criticized Donald Trump’s hair.' The fact is that I probably did say that about Carly... in a jocular manner.

The two candidates will formally face off in less than a week. The second GOP presidential debate is scheduled for Sept. 16 at the Ronald Reagan Presidential Library in Simi Valley, California and will feature Trump and Fiorina as well as nine other Republican presidential hopefuls. It's doubtful that Fiorina has anything more to say about Trump, though. Likewise, she seems simply uninterested in what he has to say and has explicitly stated she's done thinking about Trump.

At the most, the Fiorina-Trump feud is now a one-sided endeavor because, as Fiorina says, she has better things to focus on.