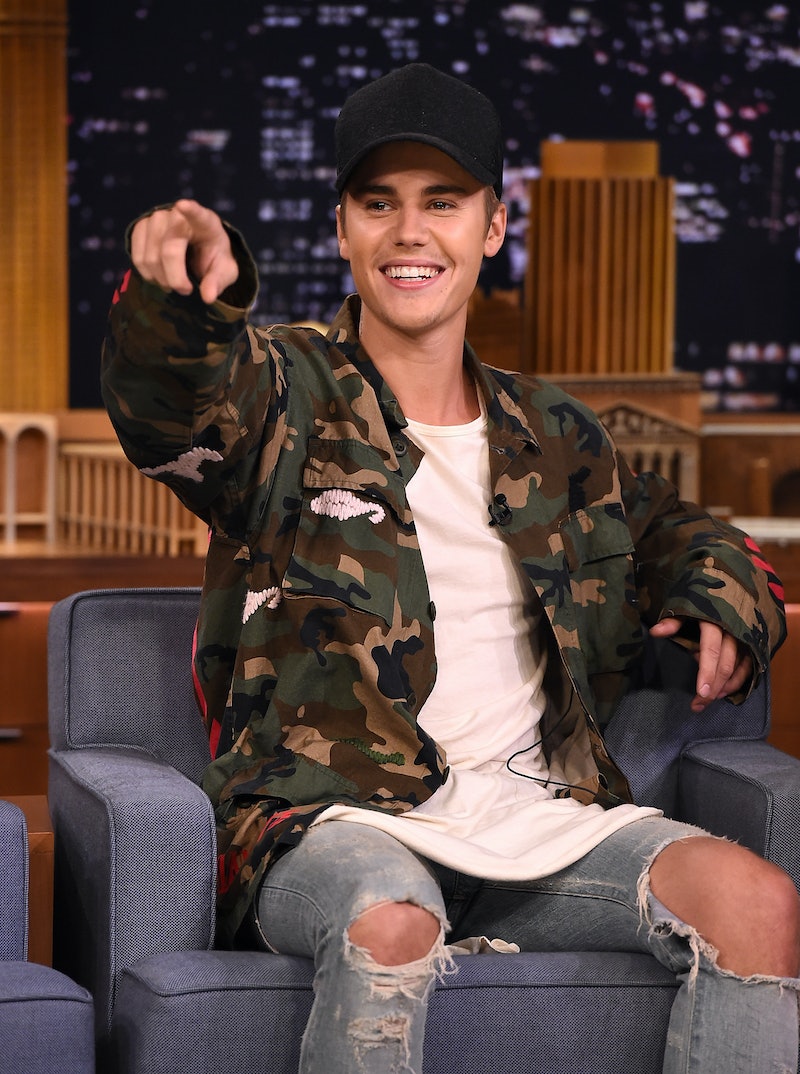 Not only is the Biebs coming back stronger than ever with his new song "What Do You Mean," but he's making another very big and newsworthy statement. On Thursday during a Today performance in the rain, Justin Bieber debuted bleach blonde hair. Yes, you read that correctly. The 21-year-old is now rocking some very white hair. Who does he think he is? The Malfoys?

It's as shocking as it sounds. I mean, his hair is definitely something. Based on the below photo, the Biebs looks pretty happy with it, so I guess that's all that matters. Plus, if you scroll through Twitter, a lot of Beliebers are thrilled with their favorite singer's new 'do.

Anyways, after staring at his bleached hair for way too long (it's kind of mesmerizing), I realized that Bieber looks like a lot of other famous people who've rocked bleached hair in the past. I guess he really is trying to channel his inner Draco and Lucius Malfoy. Do you think Bieber would be sorted into Slytherin? With that hair, there's a very good chance. Whatever the case, here are some other celebs and characters who have also embraced the bleached hair and made headlines for doing so.

They could be twins — kind of.

Did anyone else hate when Chad Michael Murray went blonde on One Tree Hill? Oh, and it looks like CMM himself is blonde, again.

If only Bieber spiked his hair...

Tilda can do no wrong with her hair. She knows how to rock the blonde. Bieber, take notes.

Yep, Kim and Bieber are identical.

So, just how long do you think the Biebs will keep the platinum look? Who knows, but I have a feeling if anyone is critical or has something bad to say about his hair, Bieber will probably respond with "What do you mean?" He looks very proud of his bleached look!

More like this
How To Curl Your Hair With Leggings, According To TikTok
By Carolyn Steber
You’ve Got 'Love Island’s Farmer Will All Wrong
By Jack Orenstein
The Best Hairstyles From The 2023 Grammys
By Olivia Rose Rushing
Pamela Anderson's Most Iconic Makeup & Hairstyle Moments
By Olivia Rose Rushing
Get Even More From Bustle — Sign Up For The Newsletter
From hair trends to relationship advice, our daily newsletter has everything you need to sound like a person who’s on TikTok, even if you aren’t.