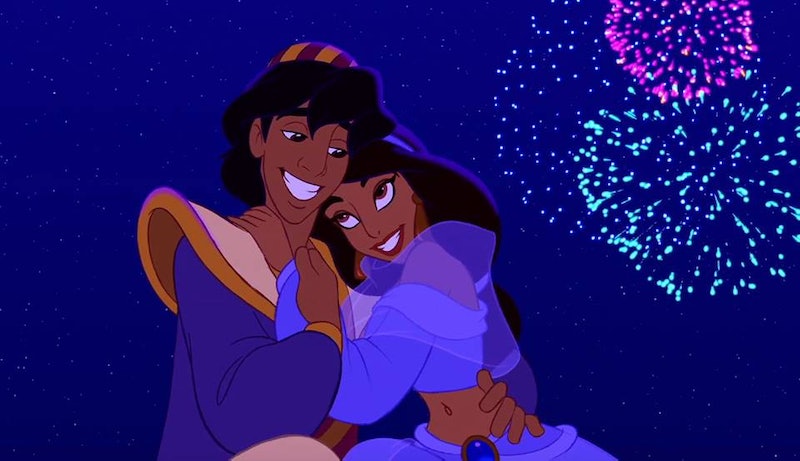 Disney is finally doing what we fairytale- and Once Upon a Time-lovers have dreamed that they would do: They're turning their best animated movies into YA novels starting this month with Liz Braswell's A Whole New World . But don't expect to see your favorite childhood movies translated verbatim. Disney is changing up the traditional stories and re-imagining what would have happened if the story had one major twist.

A Whole New World will be a twisted retelling of, you guessed it, Aladdin. You remember the story? Street rat (his words, not mine) finds a magical lamp and is granted three wishes from a giant, friendly Genie. He uses one wish to become Prince Ali and fight for the heart of Princess Jasmine. Well, let's back that up. In A Whole New World, Aladdin doesn't find the lamp, doesn't find a friend like Genie, doesn't get his three wishes, and doesn't become Prince Ali (fabulous he). Instead, the evil Jafar — and presumably his sidekick Iago — find the lamp first and is granted his own three wishes by Genie. You probably see where this is going: evil chaos.

Braswell tells the story of what would happen next. Now, Jafar rules Agrabah as the Sultan and is the most powerful sorcerer in history. But the world isn't just going to sit around and wait for his third wish to be granted. Aladdin pulls together other street rats in a rebellion, and Princess Jasmine leaves her menagerie to become an influential freedom fighter, rebelling against the royalty she used to be a part of.

Disney Press' Twisted Tales series will use its same creative spin on other classic Disney movies, but in case they are in need of ideas, I have six re-imaginings I'd like to see, each with a music-inspired title and one major twist.

The title: Once Upon a Dream

The biggest baddie of all the Disney villains basically ruined the royal family's entire universe purely for being snubbed on a baby celebration invite. That's some serious FOMO. So what if in the twisted Sleeping Beauty, titled Once Upon a Dream, Maleficent does get that invitation? She never casts the curse that says Aurora will die by her 16th birthday, Aurora never becomes Briar Rose, the three BFF fairies never live with her in the woods, she never pricks her finger, and the whole castle never falls asleep. Princess Aurora would instead grow up learning how to rule her kingdom, with Maleficent acting more silently as her antagonist. Until, of course, now-Queen Aurora marries Prince Phillip and doesn't invite the dark fairy to her wedding. To spite Aurora, she curses the Phillip, and it's Aurora instead who must battle Maleficent to save her love and her kingdom.

The title: Be Our Guest

The major twist: The Beast's furniture friends are all in Belle's head

I mean, you don't really believe Disney's story of a talking clock, candlestick, and tea pot did you? In this twisted adaptation, Belle is devolving into mental illness after being trapped by the evil Beast in his castle and subjected to his rage and violence. She dreams up a fantasy world for herself, dissociating herself from reality, where literally everything around her becomes her welcoming friends. Belle never exactly had a happy group of pals back in her "provincial life" in the small town, so she knows that no one is coming to help her. Instead Belle has to find her way back to reality herself and fight back against the Beast to escape.

The title: Part of Your World

The major twist: Prince Eric goes to Ursula to become a mer-man

Let's face it: Sebastian was right, and Ariel has a pretty sweet life under the sea. She's got a whole group of sisters who have a Partridge Family-style band, in which she's the Beyonce. She's a princess. Her best pal Flounder is 100 percent loyal and will follow along on her zany adventures. Why would she ever want to go up where they lay all day in the sun? Instead, Prince Eric has basically no one. He lives and breathes by the sea, and is happiest out on his boat or overlooking the ocean from his crazy Cribs balcony. So one day when Ursula is roaming the beach in her Vanessa disguise, Eric instead implores the sea witch to transform him into a mer-man. Ariel recognizes the prince as the one she saved from the drowning, but he can't remember her. Because Ursula's price was to wipe the prince's memory unless he can get a kiss from his true love within three days.

The title: So This Is Love

The major twist: Cinderella can't go to the ball, and Prince Charming marries her evil stepsister

Imagine if the evil stepmother's plan sticks, and no Fairy Godmother can bibbity-boppity-boo Cinderella to the royal ball. Somehow, instead, Prince Charming is pressured into an agreement where he marries the evil stepsister Drizella. (He has a thing for brunettes.) Anastasia, feeling resentful and abandoned, turns against her mother and her sister, finding an unexpected friend and ally in Cinderella. Prince Charming isn't so charming — and really, throwing a ball where he can cherry pick his bride from like his own life-action Tinder should have shown us that — so he makes passes at both Anastasia and Cinderella. The girls, realizing what's going on, team up to put Prince Charming in their place and get revenge on their mother/step-mother for pitting all three against each other since they were children.

The title: Second Star to the Right

The twist: It's Tiger Lily and Tinkerbell who comes to the Darling's room

In an effort to escape Peter Pan, the crazy stalker flying boy who's after them, Tiger Lily and Tinkerbell hide themselves in the Darling's playroom where they meet Wendy, Michael, and John. Wendy finds that she was meant to take part in this journey to Neverland to help the young women fight against the magical boy who came and took over their homeland. The catch is that Michael, who was always teased for his smarts and glasses, takes a liking to Peter Pan's macho bro-code and his rag tag group of Lost Boys who bullied all the girls out of Neverland. Now, they have to find Michael and convince him to escape Pan's grasp and they find an unexpected ally in Captain Hook and his female first mate, Smee.

The title: Let It Go (Of course)

Disney can pay major homage to its dedicated viewers by showing us that the mind-blowing fan theory is actually correct. If you notice the end of Frozen, Rapunzel and Eugene show up to Arendelle for Elsa's coronation. The theory, and Let It Go, centers on the idea that Rapunzel showed the same magical blood as Elsa did because it affects the blondes in the family, and that's why she was kidnapped by the witch. In fact, Elsa and Anna's parents were killed on their way to Rapunzel's wedding. In Let It Go, Elsa and Anna discover this family connection and seek out their cousin, teaming up to fight against the evil in the land and advocating for equal rights for those with magic.

More like this
16 Novels That Paint A Realistic Portrait Of Abortion
By K.W. Colyard
“The Door Is Always Open” For Another 'Breaking Bad' Spin-Off, Says AMC Boss
By El Hunt
40 Cringe-Worthy Mistakes You Don't Realize Are Making Your Home Look Ugly
By Rachel Bar-Gadda
You'll Wear These Cheap, Comfy Bras & Underwear So Much You'll Wish You Got Them Sooner
By Sara Brown-Rigoli
Get Even More From Bustle — Sign Up For The Newsletter