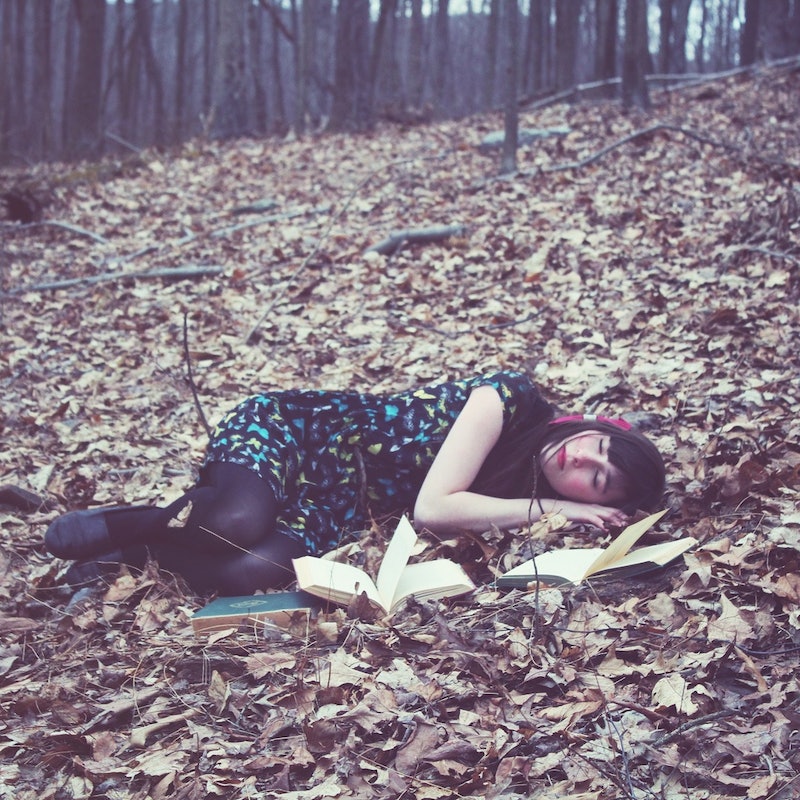 Thankfully, if you're falling behind on your reading goals this year, this fall and beginning of winter has a whole lot of young adult books you will want to devour. On the flip side, you're going to need to staple another sheet of paper onto your TBR list.

Retellings are still raging hot, but now Disney itself is getting into the game with adaptation of its own classic animated movies because it's about time. Plus, your favorite futuristic fairytale re-imagining series is back with its jaw-dropping finale. There's another journey into the land of Arabian Nights, and Chinese folklore gets a magical twist.

Meanwhile, science fiction and fantasy lovers will want to swim in all the possibilities this fall. Whether they want to be on an isolated planet amid an invasion, participating in a heist, or living in a Harry Potter-style fanfiction world, 2015 has you covered. If you'd prefer to just be surrounded by the supernatural while you try to study for your physics exam, there's that, too.

So many more authors are taking us back to planet Earth with powerful real-life stories based on real events and so relatable they will seem like they are. And it wouldn't be right to cozy up without one or two stories about friendship and first love.

As the weather starts to finally cool off and sweater and throw blanket weather moves in, you are going to want this stack of 14 YA books on the side table next to you.

If you started singing the iconic song from Disney's Aladdin, you're already ahead of me. A Whole New World is the first release from Disney Press' Twisted Tales, young adult retellings of everyone's favorite animated Disney movies. In this re-imagining of Aladdin, Liz Braswell envisioned what would have happened if Jafar reached the Genie's magic lamp before Aladdin did. Hold your breath, it gets better: Princess Jasmine. Rather than a princess relegated to her room and menagerie of animals, she's a rebellious freedom fighter striking to take the evil Jafar out of power. It's shining, shimmering, splendid.

Everything Everything by Nicola Yoon (Sept. 1; Delacorte Books for Young Readers)

Excuse this, but: Nicola Yoon's highly anticipated debut novel Everything, Everything is everything. It follows Madeline who has a "bubble girl" disease, meaning she's literally allergic to the world. A simple visitor is too much trouble — hours of decontaminating and sterilization — and she isn't even allowed to take a step outside. Madeline is reluctantly accepting of this life, until a new family moves next door and the teenage boy intrigues her. Now, her simple, sterile life with her mother seems small, and she wants more than anything to experience everything life has to offer, especially with Olly next door. Madeline's tragic, heartbreaking circumstances launches into a story of hope and the powerful beauty of the most simple of life's experiences.

Anyone who has ever felt uncomfortable in their own skin will find inspiration from Willowdean Dickson, aka "Dumplin'." Will proudly proclaims herself a "fat girl," and she's comfortable and happy by her body — despite her beauty queen mother pushing her on diet fads and giving her the titular nickname. Her confidence wavers, however, when she draws the attention of hot jock Bo and she begins to question her appearance. To gain back the body confidence that's slipping, Will joins her mother's beauty pageant, breaking all the traditional rules, and liberates herself and everyone who is reading along with Will's story.

What We Saw by Aaron Hartzler (Sept. 22; HarperTeen)

I'm not going to pretend What We Saw will be an easy read, but it will be a vital one. Rapture Practice's Aaron Hartzler fictionalizes the events in Steubenville leading up to and following the rape of a high school girl. In What We Saw , cheerleader Stacey Stallard accuses four classmates of gang raping her while she was unconscious at a huge party at another classmate's house. The town erupts into chaos, as adults and peers deny Stacy's claims. Kate Weston was at that party, too, but she was too drunk to piece together the majority of the events. So it's only when she sees a picture of Stacey, unconscious and over the shoulders of one of the accused does she begin to question what exactly happened at the party. It's a powerful (though difficult, and all too family) account of rape culture in our country, where Hartzler incriminates those who remain silent as part of the problem.

Kaui Hart Hemmings gave us the beautiful novel The Descendants, made into the George Clooney-starring Academy Award-winning movie. And thank goodness Hemmings takes us back to Hawaii for her first young adult novel Juniors . Lea Lane is the new girl at school (again) in Hawaii, and to make matters worse, she's the new charity case, living in the guest cottage of the wealthy West family's estate. There's surfing, sunshine, and perfect youthful summers. Just like in The Descendants, the book is at its most magical when it delves into the complicated family dynamics across generations and allows the stunning Hawaiian backdrop to shine.

We know the Grisha trilogy's Leigh Bardugo can engross us in an epic dark fantasy series. But Six of Crows adds even more exciting angles and themes — think an Ocean's 11-style heist with the added bonus of magic and a dangerous underworld as a setting. A band of teenage misfit outcasts from all walks of life have their eyes on getting rich, if they can only succeed in a near-impossible theft. Everyone has their own reason for wanting to take home the haul, and their own reason for turning to the criminal world. Though there's loads of page-turning action, Bardugo never sacrifices her multi-dimensional characters.

The Rest of Us Just Live Here by Patrick Ness (Oct. 6; HarperTeen)

Young adult lit is full of the Chosen Ones — those who have been destined to achieve greatness, have superhero powers, or who have innate skills to save their people from a life of poverty. But Patrick Ness doesn't tell their stories; he tells the stories of the rest of us. While the Chosen Ones in Mikey's high school are more concerned with saving the world, Mikey would rather just find a date to prom and graduate in one piece. It's a heartfelt, hilarious, and all-too-relatable story that will remind you that you don't have to be *SPECIAL* to be plain old special.

I certainly don't have to hype up Rainbow Rowell's fanfiction turned novel Carry On , because I'm pretty sure most of you already have it on pre-order. But in case you somehow missed the Eleanor & Park author's first full jump into fantasy, here's what you need to know: Carry On is a spin-off of sorts of Fangirl that brings to life heroine Cath's beloved Simon Snow fantasy series. In Fangirl, Cath writes her own fanfiction of the Harry Potter-esque series called Carry On, Simon. And thank goodness, with this release, we're finally going to get to read Cath's hard work like the rest of the fictional Internet.

Arabian Nights is lighting up 2015. First with The Wrath and the Dawn and then with A Whole New World, and now finally with A Thousand Nights, Scheherazade-loving storytellers can find a lot to love this year, each with their own unique spin and style. A Thousand Nights stands out with the acclaimed, award-winning author of The Story of Owen E.K. Johnston at its helm. She deftly evokes Scheherazade's quiet but compelling storytelling style, so much so that you'll want to read it aloud. Set in the indefinite pre-Islamic Middle East, A Thousand Nights tells the familiar story of Lo-Melkhiin, a king who weds and kills hundreds of wives — until he meets his match in an unnamed woman who is able to delay her death by spinning tales.

We've waited long enough for a Young Elites sequel, don't you think? Marie Lu picks up anti-hero Adelina Amouteru's story in The Rose Society. After she was one of the few survivors of the blood fever plague, Adelina and others are marked with physical transformations that make them feared in their society. Lu only expands upon her exciting world in this sequel, as Adelina finds herself stuck in warring societies seeking powers over this new supernatural magic that has entered their world. While Adelina claims she is leading the charge to rescue the feared and hated survivors like herself, she finds herself drunk on power and pushing herself to give into her desires more and more.

Forgive the terrible pun, but Illuminae is out of this world. It's 2575 and there's an interstellar war between two rival super-mega-corporations who both want control over a teeny planet. Kady and her ex Ezra just happen to inhabit that planet, and nobody seemed to care to warn them that they were literally in the middle of a bitter dispute. But YA sci-fi icons Amie Kaufman and Jay Kristoff don't tell this story in a simple, linear way. They take a more World War Z approach and tell the tale via a large file, filled with diary entries, interviews, memos, tech-transcripts, and so much more. It's such a unique, refreshing way to tell this action-packed science fiction story that you'll be begging for the second installment once you close it.

Vampire Academy's Richelle Mead is back with her next big YA fantasy story, Soundless. Using elements of Chinese folklore, Mead tells the story of an isolated village absent of sound. When the village finds itself in trouble, with a lack of food and resources to sustain its people, Fei thinks that her magical, newfound ability to hear will be her weapon to save her home and everyone she loves. There's adventure, magic, and a good dose of romance, making it an excellent book to pick up with a cup of tea and a free afternoon.

Finally! Marissa Meyer caps off her incredible Lunar Chronicles with Snow White's tale, Winter. The whole gang is back, Cinder, Scarlet, Cress, Captain Thorne, Wolf, Kai, and of course, the evil Queen Levana, as the series comes to an epic conclusion. As we learned in Fairest, Levana's story, Winter is Levana's stepdaughter who refuses to use her glamour and, thus, is going slightly bananas and experiences hallucinations. Our four heroines collide in the final installment and set out to defeat the evil queen and stop her from wreaking havoc on both Earth and Luna. Now we just have to figure out what to do when we're done reading the series.

This Raging Light is here to warm your heart at Christmastime. Estelle Laure's buzzy debut follows Lucille in the aftermath of her father's mental break and her mother leaving, as she's stuck taking care of her younger sister Wren and acting as the adult in her household. Just like so many young women, Lucille develops an unfortunate and ill-timed crush on her best friend's brother. This Raging Light is a funny, heartwrenching, and soulful read as Lucille develops her own personal family, bloodline or not. It's not one you'll soon forget.