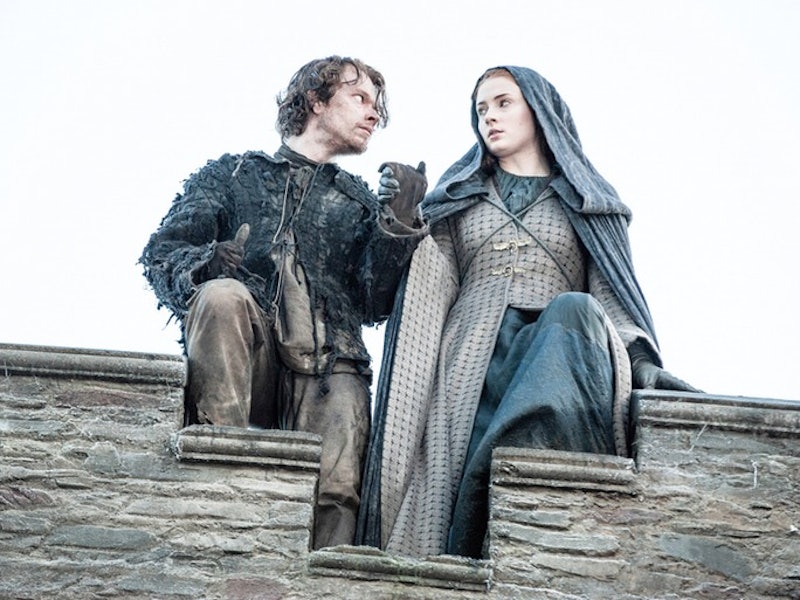 Personally, I've never been a huge fan of Theon Greyjoy on Game of Thrones . When he wasn't too busy being overly cocky, he was off betraying the family who had treated him like a son. And while I did sympathize with everything Ramsay put him through, his lack of backbone throughout Season 5 did nothing to squash my on-going annoyance with him. However, I'm hoping that Game of Thrones Season 6 will show Theon in a whole new light. Now that he and Sansa have escaped Ramsay's clutches (at least for now), I find myself extremely curious about where their storylines will go from here — that is assuming they survived that jump in Winterfell. (Which, let's face it, they totally did.) But what will happen to Theon moving forward? As of now, his fate remains somewhat of a mystery.

Unlike previous seasons, Game of Thrones fans are heading into uncharted territory since we no longer have George R.R. Martin's novels to turn to for answers. (Well, at least until The Winds of Winter gets published.) But given what little bit we do know, I'd say that Theon may finally be on his way to actually being likable as his journey toward redemption progresses. (Warning: slight book spoilers ahead. Keep reading at your own risk!)

According to excerpts from The Winds of Winter , Theon does survive the fall with Jeyne Poole/"Arya" (in the books, she became Ramsay's wife instead of Sansa) and the two of them end up getting captured by Stannis. Now, obviously, there's already a major flaw in this potential scenario given that Stannis was killed by Brienne in the Season 5 finale, or at least that's what it looked like. But even if he ends up not being dead like we thought, his entire army just suffered a massive defeat, so he's not exactly in the best position to be taking people prisoner.

But just for argument's sake, let's say that this little rendezvous does go down like in book. That would mean that Stannis will send Jeyne (or in this case, Sansa) to Castle Black to meet up with Jon Snow — don't even get me started on that potential can of worms — and decide to execute Theon for killing Bran and Rickon Stark, who everyone still believes are dead. So obviously, this particular scenario wouldn't work out too well with poor Theon here. However, given that half of these characters are potentially dead, I'm willing to bet Theon's story will stray in a different direction.

Instead of getting captured by Stannis, I predict that Theon and Sansa will flee to his family's house in the Iron Islands. We haven't gotten a good look at the goings on at House Greyjoy in quite some time, and now that Pilou Asbæk has been cast to play Theon's uncle, Euron Greyjoy, I'd say it would make sense to see these two storylines collide. Perhaps he will be the one who helps make Ramsay pay for his heinous crimes. Either that, or Sansa will guilt trip Theon into searching for her brothers now that she knows he didn't actually kill them.

But whatever ends up happening for Theon, I just hope that his journey continues him down the path of redemption and make him a character that's finally worth rooting for.