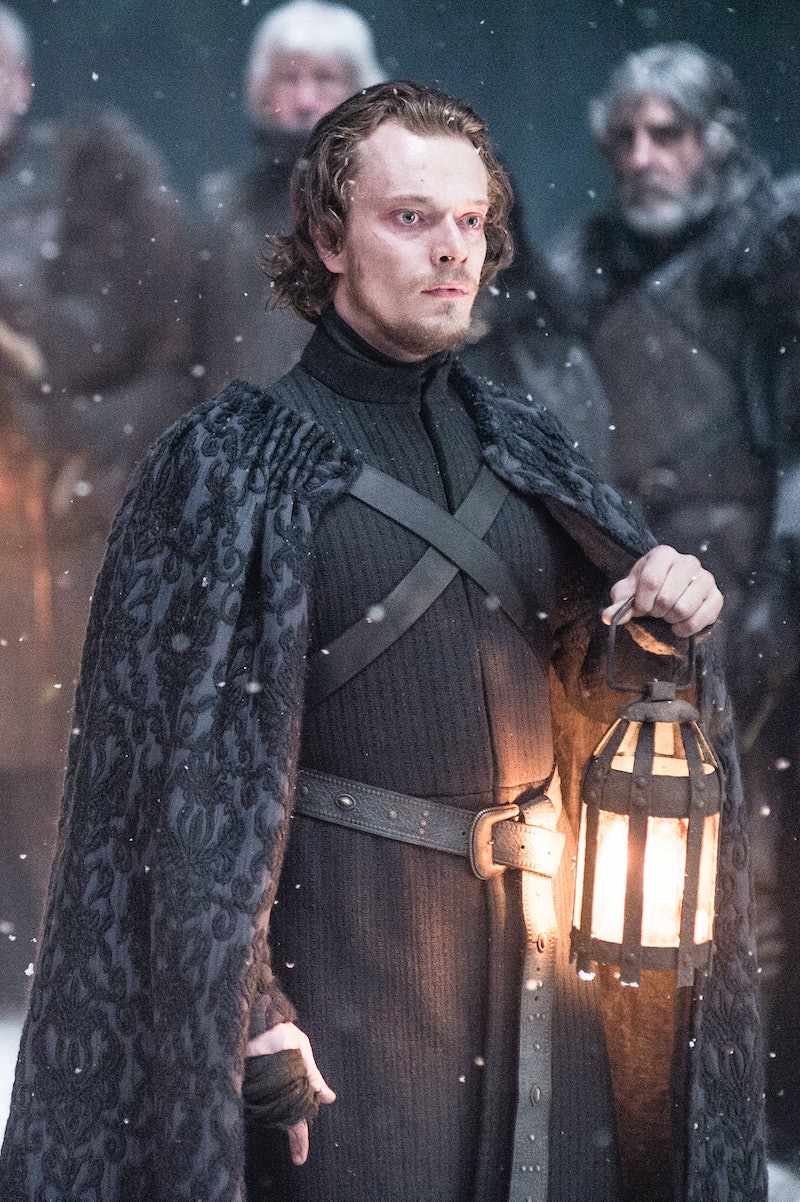 Unless you have somehow managed to avoid social media like the plagued these past few days, then chances are you've heard all about the number of shocking deaths that occurred during the Game of Thrones Season 5 finale — one of which included the potential demise of Jon Snow, which has been the subject of much-heated debates. (Ironically, it's now we, not Jon Snow, who know nothing.) However, he is not the only character whose fate has been called into question. After Theon helped Sansa escape from Ramsay and the two of them jumped from the very high ledge of Winterfell's castle, fans immediately began speculating whether or not Sansa and Theon will survive and return for GoT Season 6.

Prior to the finale airing, actor Alfie Allen, who plays Theon Greyjoy, had a chance to sit-down for an interview with Zap2It, where he opened up about his character's future and what he hopes to see from Theon moving forward. "There's been so many dark moments and so many massive changes in this character's storyline, and now Sansa and Theon's have joined," Allen told the site. "There's hopefully going to be dark, dark, dark pieces and maybe light at the end of the tunnel in some sort of Game of Thrones-y way. We've just got to wait and see."

Of course, Allen wasn't able to confirm anything about Theon's Season 6 involvement outright, considering that he himself supposedly doesn't know what lies ahead for his role in Westeros. "Whatever is going to happen afterwards, I'm just waiting to find out," the actor said, before adding, "For all I know, I could be dead, so I don't know." Granted, that's not exactly reassuring, but I have a feeling that all of the actors are supposed to feign ignorance for the time being, just so they don't give anything away. And given that Allen's one main hope for Theon is to find "redemption" for his sins — a journey his character only just started to embark on in the finale — I have a feeling he'll be back to further continue down that path of atonement.

On a show like Game of Thrones, it's important to always remember this steadfast rule: if you don't see a death take place with your own two eyes, there's a good chance it didn't actually happen. Heck, sometimes even seeing the death firsthand isn't an outright guarantee either, not when you've got White Walkers and Lord of Light priestesses walking around with the power to resurrect the dead. (Hence all the Jon Snow theories.) So the fact that we only saw Sansa and Theon jump, but were deprived of witnessing the outcome, indicates that they're probably alright. The writers just wanted to leave us hanging until next season. Cruel, I know. But that's how the Game of Thrones is played, isn't it? And what is dead may never die.

So don't worry, folks. Odds are, there's still plenty more of Theon's story to tell and something tells me it'll reek of excitement. (Too soon?)

Bustle reached out to Alfie Allen’s reps for comment, but they could not be reached at the time of publication.