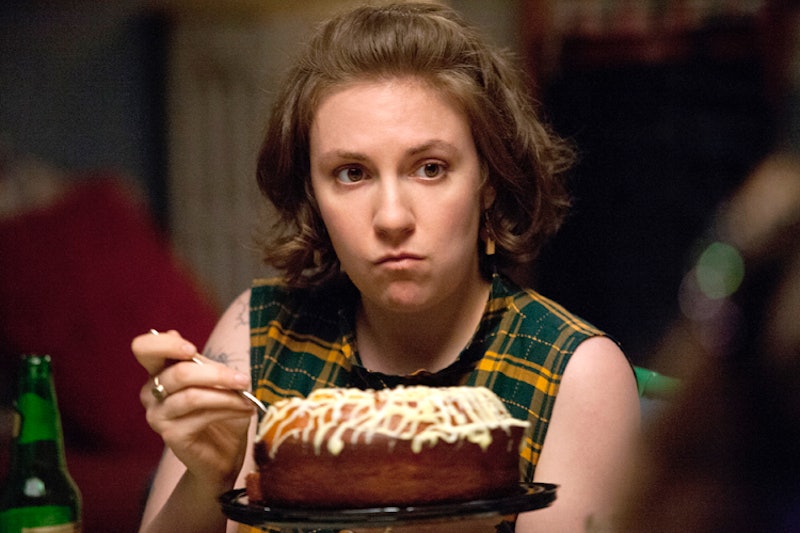 When I sat down to think about how many actual humans embody body positivity in cyberspace, the list was absolutely endless. As much as I'm thankful for all these amazing role models who exist in the online world, however, I'm equally annoyed that there aren't more body posi characters on the TV shows we all love to binge and obsess over.

In 2015, television characters are still often thin, cis, white-presenting individuals. If there happen to be any plus-size characters on TV, their weight is regularly utilized as comedy. Despite having a pretty shallow pond to work with, I did mange to fish up some examples of characters who have demonstrated body positivity, at least in some way. It wasn't just a case of finding "plus size" characters (because as we know, simply being plus size doesn't automatically make you a body positive person), but rather characters who truly demonstrate some core principals of the movement. So let's take a look at the seven most body posi ones.

Considering her character was created by Lena Dunham, it's no surprise that we can find a body positive soul in Hannah Horvath. Sure, Hannah somewhat fumbles through life as a mid 20-something woman living in New York City, but her body image never seems to be an issue.

Hannah is constantly shown feeling incredibly comfortable being in her own skin. She has no problem being completely naked in front of her friends (eating cupcakes while naked in the bathtub with your bestie is totally normal), boyfriend (there are nude sex scenes aplenty), random hookups (Ping-Pong in the nude, anyone?), and even in public. I mean, only someone body positive could rock a mesh shirt at the club without any f*cks to give.

2. Donna Meagle From Parks And Recreation

Donna Meagle is a gorgeous, hilarious, witty, sassy, and absolutely fabulous woman (and not just because she has a Mercedes). Donna is one of the few plus-size characters on TV who is not only confident but excessively so (in the very best way possible). Her weight is never the butt of any joke, either. In fact, the fact that she is plus size only adds to her appeal.

We also mustn't forget the fact that she's partially responsible for some of the best advice ever given on TV: Treat yo' self .

This might come as a little bit of a shock (considering the nature of some of the jokes he makes), but Peter Griffin has proved to be a very body positive person. In Season 4, Episode 22, "Sibling Rivalry," Lois ends up gaining weight and Peter teases her about it at first. However, he quickly discovers that he developed an intense sexual attraction to Lois and he becomes obsessed with helping her stay plus size.

Eventually, Peter learns a valuable lesson and tells Lois that he "loves her no matter what she weighs," but still leaves the suggestion open that he remains sexually attracted to "fat." Aside from his feelings about his wife's body, Peter also demonstrates complete and utter confidence in his own body as a plus-size man. Although a lot of his nakedness and comfort in his own body are used in a comedic fashion at times, it's still pretty obvious that Peter is perfectly happy being the big man that he is.

4. Mindy Lahiri From The Mindy Project

Mindy Lahiri is not only a hilarious doctor, but also a fabulous, gorgeous woman. Mindy doesn't consider herself to fit into the traditional "standard" of beauty, being somewhat "thicker than the norm." She makes jokes about her weight now and then, but they always come across as witty commentaries on society and its expectations.

Mindy loves to eat, embraces her body, knows that she is gorgeous and fabulous, and takes no prisoners when communicating that to others around her. In her own words, "If I'm gonna be a mess, I might as well be a hot mess."

Some of you may wonder why I didn't list Sookie St. James here instead, but hear me out. While I love that Sookie St. James is an adorable, wonderful, positive plus-size character on TV (which deserves some mad respect), I found her best friend and business partner, Lorelai Gilmore, to be more outwardly communicative when it comes to being body positive.

To me, Lorelai seems like she'd be one of the best moms to have if you are a girl with body image issues. She just cares about the important things in life: Happiness, community, friendship, love, and supporting the people she loves. Eating junk food is the norm for her and her daughter (and no one cares about watching their waistlines or promoting a "healthy lifestyle" in her house). She also seems to enjoy keeping plus size company in the way of Sookie, Babette, and Miss Patty, who are all women she adores and respects. Lorelai sees people for who they are, and never for what they may look like.

She may have started off as the soul of a shallow model, but the character of Jane Bingum (plus-size brain and lawyer) quickly develops into a body positive person who is both confident and comedic. It doesn't take long for the lady on the inside to learn that she can be beautiful, powerful, and fabulous while living an extremely gratifying life as a plus-size woman. Jane demonstrates just how greener the grass actually is on the other side. You know, the body positive one.

Rachel "Rae" Earl doesn't start off very body positive at the beginning of the show. In fact, she's quite the opposite. Rae struggles with a mental illness that stems from negative body image and an eating disorder, and spends the majority of the show coming to healing terms with her own body, self-worth, and self-love.

It's a completely relatable journey and experience — one that so many fellow plus-size people empathize with. However, through Rae, we are able to see ourselves and the world in a broader perspective, communicating a truly body positive message and moral at the end. Eventually Rae learns to appreciate and love the good things about herself, sees how other people (positively) view her, and finally begins to love and accept herself for all that she is.

More like this
I Have Eyebrow Alopecia – & Microblading Gave Me My Confidence Back
By Jessica Morgan
Hannah Khalique-Brown Has Her Sights Set On 'Strictly'
By Frances Stewart
Who Could Die In The Stranger Things Season 4 Finale?
By Kadin Burnett
Here’s Your Fourth Of July Weekend Horoscope
By Mecca Woods
Get Even More From Bustle — Sign Up For The Newsletter