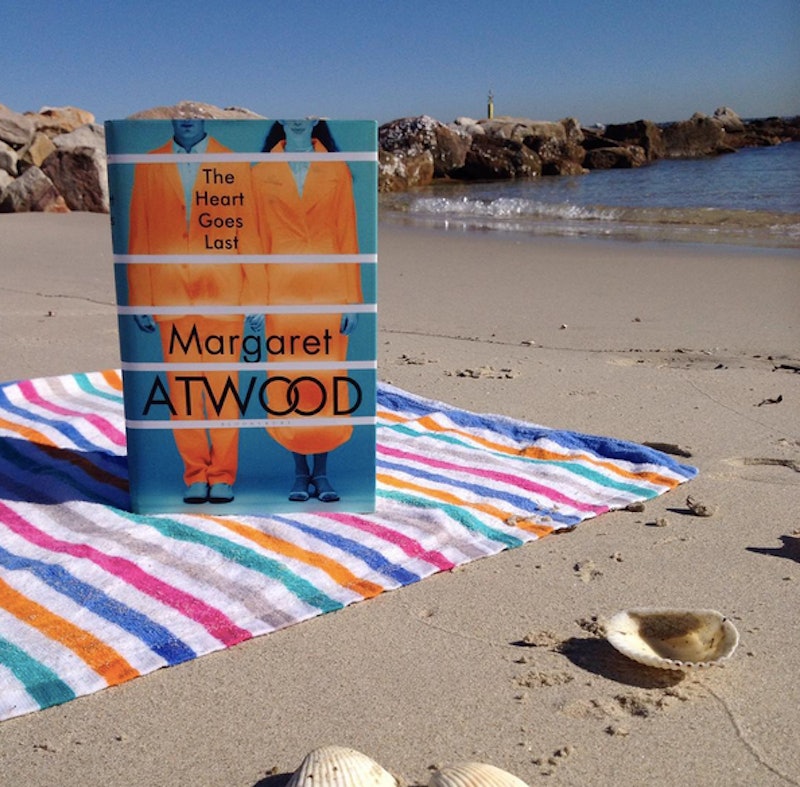 Margaret Atwood is a badass. If you find this statement controversial, might I refer you to her classic novels, her hilarious Twitter account, or her impassioned activism? If you're still not convinced, well, what about the fact she pioneered a brand new genre? Or that she wrote a whole novel just to stick it in a time capsule? I could continue, but the moral of the story is that Margaret Atwood is awesome.

Of course, you already know this if you’ve read any of her novels, which are consistently excellent and span topics from toxic childhood friendships to bio-engineered plagues to a 19th century women’s prison (though they almost all have fiercely unconventional women at their centers). Atwood is also a prolific writer of nonfiction, but recently she’s become best known for her dystopias, and with good reason. Oryx and Crake, The Heart Goes Last, and — especially — The Handmaid’s Tale present terrifyingly plausible visions of the future gone wrong that are still immensely entertaining to read about.

Though you’re unlikely to run out of Atwood’s fantastic stories anytime soon — especially with a new one coming out later in September — I’ve collected nine great novels in case you’ve just run through all of the MaddAddam novels in a week and are looking for some equally well-written tales of the future to scratch your literary sci-fi itch.

It's hard to describe Ishiguro's heartbreaking novel without giving away its first twist, which sets the book apart from the realist drama it might otherwise seem to be by explaining who and what it's main characters actually are. But knowing the true purpose of Kathy, Ruth, and Tommy's lives doesn't diminish the devastating power of the story's final turn. In fact, I'm crying just thinking about it.

This novel is more properly science fiction than most of the others, but it's just as good. After years traveling through space, Avice Cho returns home to Embassytown, where humans tenuously coexist with a bug-like native species who use a completely literal language that humans are physically unable to speak. There she finds that the balance of power between the two species is shifting dangerously, and what follows is both a gripping space adventure and a complex meditation on the function of language.

This novel is a classic for a reason: it's hilarious. OK, there's a bit more to it than that, since the novel's humor comes not only from its absurdity but also its spot-on satire of the arms race, but the bottom line is still that you will not stop laughing until the end, at which point you may be overcome by fears for humanity's future. Reading's a rollercoaster.

The Flame Alphabet By Ben Marcus

This book has the dubious distinction of having displaced The God of Small Things as The Most Depressing Book I Have Ever Read — so consider yourself warned. Nonetheless, Marcus' vision of a world where communication is rendered literally toxic is beautifully rendered, fascinating, and, yes, deeply troubling.

As visions of the apocalypse go, Station Eleven's isn't exactly cheerful either — a virus wipes out 99 percent of the world's population over the course of a few weeks leaving the few survivors to battle over the remaining supplies. But Mandel doesn't dwell on the disaster, instead focusing the narrative on the life of a movie star before the plague and a traveling theater troupe 20 years after. What emerges is a deeply hopeful novel: its characters know that as brutal as the world can be, our connections — and the the art we create in tribute to them — are more powerful than we admit.

The Windup Girl By Paolo Bacigalupi

This novel is perfect for fans of the Maddaddam trilogy: it's set in a world of bio-engineered fauna, artificial humans, dwindling resources, and super powerful corporations. Baciagalupi's Bangkok is mesmerizing — you wouldn't want to live there, but it's a great place to spend a few hours.

This brief novella follows Slumber Crops all-star Trish Edgewater as she solicits sleep donations to combat the plague of insomnia that's killing thousands all over the US. Specifically, it's focused on Trish's attempts to secure the untroubled ZZZZs of a perfect donor, Baby A, whose sleep may hold the cure to the deadly sleep disorder and balance out the terrifying nightmares that have contaminated the sleep bank.

The Left Hand Of Darkness By Ursula K. Le Guin

Like Atwood, Le Guin is a masterful writer who uses science fiction to explore gender stereotypes — except she does so in space. The Left Hand of Darkness is set on the planet of Winter, where all the inhabitants are androgynous, and the arrival of a human man causes no small amount of confusion.

Butler's famous novel takes on so many capital-I issues that it's amazing that it doesn't buckle under the weight. But the intense tale of a modern black woman pulled back in time to the plantation of her slave-owning ancestor offers a heart-rending account of the cost of survival.