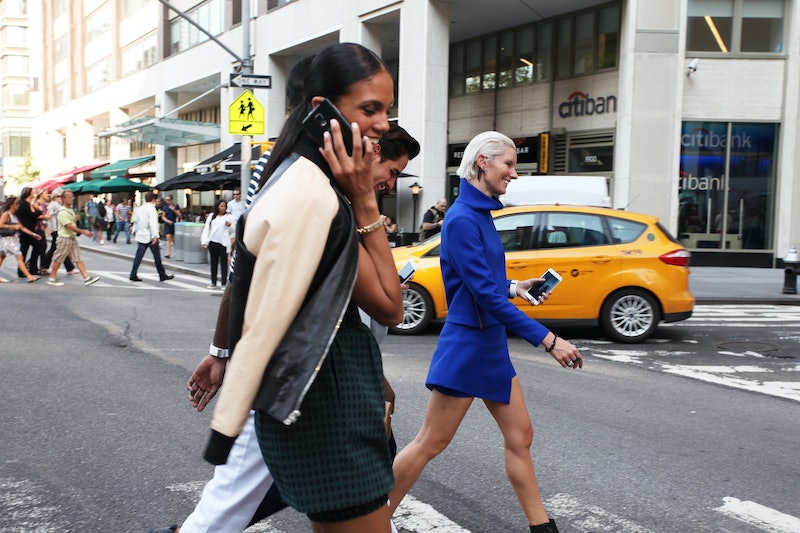 Hiking in heels is an ill-advised venture, yet IMG's acquisition of New York Fashion Week has transformed the sartorial extravaganza into a trans-borough odyssey in which stiletto-clad editors, bloggers, and celebrities must Uber, subway, and sprint between locations to maintain their strictly scheduled showings — and the trek isn't the only transformation to hit show-goers this season.

The sartorial mayhem that is Fashion Week is now doubly befuddling thanks to the plethora of diverse spaces, its augmentation to include more designer virtuosos in the making, and the slightly shrunken runway arenas that mean more standing space invites and greater exclusivity. It seems Fashion Week has become more perplexing than ever, a feat some would have thought impossible prior to Sept. 10.

As a Fashion Week veteran with one or two seasons of beautifully designed bedlam under my belt, I ventured into the season's shows curious to discover how the event's strange and sprawling new map would modify the spirit of the occasion. After stumbling into a brave new world that is Fashion Week 2.0, I found that the changes wrought by IMG's takeover and supposedly minor tweaks have refashioned the sartorial festival. What, exactly, is different, you ask?

1. The Lack Of Photographers Clustered Around Lincoln Center — Or In Any One Location

Fashion Weeks past have seen swarms of street style photographers lolling about Lincoln Center in pursuit of that perfect picture capturing an off-duty model or exquisitely dressed fashion blogger. With the event's expansive, city-encompassing new zip code, photographers are less centralized around one location. The paparazzi and shutterbugs are in constant flux depending upon which show takes precedence, forming crowds around specific runway venues for an hour at a time before flitting off to the next locale.

Moynihan Station and Clarkson Square's street style scene is appropriately minimalist given the breadth of the location. Despite an adequate number of photographers and bloggers gathered about the central venues, there was something more grandiose about the overwhelming scene at the Lincoln Center's plaza.

3. Invites Are More Difficult To Score

Unless you're an accredited member of the press or a fashion blogger on par with Aimee Song or Chiara Ferragni, don't expect a beautifully crafted Paperless Post invitation to your favorite designer's runway. "IMG will only be issuing credentials to major media outlets. Individual agencies or freelancers interested in attending must be on official assignment from said outlets and have supporting documentation," the official New York Fashion Week website insists.

4. The Main Venues Including Skylight Clarkson Square Are Smaller

Bloggers and editors awarded with a standing room invitation or even a back row seat at Mara Hoffman were shocked to find that the seemingly expansive venue could not actually accommodate them — and the phenomenon was far from rare throughout the week. With a roster of more petite venues than Lincoln Center boasted, IMG's Fashion Week is a bit more crowded, and cozier than in years past. According to a statement issued by IMG, Skylight Clarkson Square's available studios only possess space for 250 and 500 people, respectively, which amounts to a decidedly more petite guest list than that which the expansive Lincoln Center spaces could accommodate.

5. The Term "NYFW" Now Encompasses The Efforts Of Three Organizations, Meaning A Larger Event Than Ever

The CFDA, MADE, and WME-IMG all play a role in what is broadly referred to as "New York Fashion Week", but can you guess the contributions of each organization? IMG can be thought of as the primary corporate owner of New York Fashion Week, hosting a fair share of its designers' presentations on-location at Skylight Clarkson Sq and Skylight at Moynihan Station. However, the former rebellious younger sibling to New York Fashion Week known as MADE Fashion Week is now a functional facet of IMG's NYFW — though the avant-garde and fresh-faced designers making up its ranks are showing in disparate locations across the city. Meanwhile, the Council of Fashion Designers of America has taken on the doozy that is Fashion Week's cluttered schedule of far-flung events whilst redoubling its efforts to include the blossoming talents of young designers. Therefore, the vast web that is Fashion Week has stretched even further to encompass its competitors and take over more Manhattan real estate.

While Fashion Week has always defied convention both aesthetically and geographically, 2015 has proved a distinctly pivotal year for the event. With its adventurous new venues and rapidly changing identity, the face of Fashion Week is a metamorphosis in progress. The moral of the sartorial story is this: If you plan to attend Fashion Week in the future, bring a pair of shoes comfortable enough for trekking long distances, and for the sake of your soles, stow stilettos away for another occasion.

More like this
Lizzo Celebrates Juneteenth With Pan African Flag Dress
By Dominique Norman
5 “Ugly” Fashion Trends Halsey Makes Look Chic
By Allie Fasanella
Ciara Is Just Getting Started In Fashion
By Dominique Norman
Yes, You Can Buy Off-White’s New Beauty Range In The UK
By Tomi Otekunrin
Get Even More From Bustle — Sign Up For The Newsletter