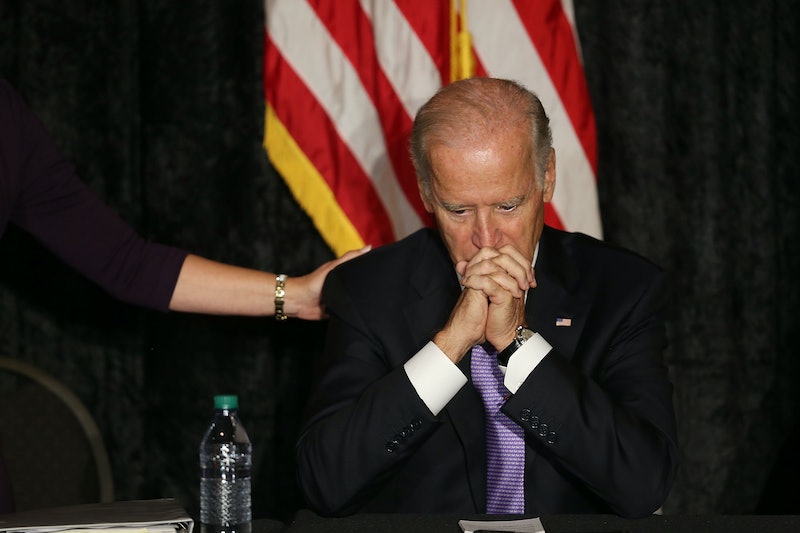 In a startlingly candid and emotional interview with Late Show host Stephen Colbert, Vice President Joe Biden spoke about his deep faith and religion, and how it has helped him through the loss of his son. The interview was one of the first after the vice president lost his son to brain cancer in May, and was much anticipated as Biden fans hoped he would announce an upcoming presidential campaign.

Instead, viewers got a deeper look at the maybe candidate, who was very vocal about his Catholic faith, saying it provided him with an "enormous sense of solace." The vice president is no stranger to loss — years before the death of his oldest son, Biden's first wife and daughter were killed in a car accident. During the interview, Biden discussed how religion has helped him cope. "I go to mass, and I'm able to be just alone, even in a crowd," he said. "It's just a place you can go."

The vice president also shared his deep sense of spirituality, and how it keeps him positive, attributing part of his to his wife, Jill. At one point he shared an anecdote about how his wife leaves inspirational notes for him, including a quote from philosopher Kierkegaard that read, “Faith sees best in the dark.”

According to Biden, his religion is not only a means for helping him through loss, but also giving him comfort in other ways. "Some of it relates to rituals, some of it relates to the comfort of what you've done your whole life," Biden said. "What my faith has done is... it sort of takes everything about my life — with my parents and my siblings and all the comforting things. And all the good things that have happened, have happened around the culture of my religion and the theology of my religion."

The interview was raw, revealing a true vulnerability to the vice president. It also showed an unexpected level of humility as he told anecdotes from his childhood and life. At one point, despite relaying the emotional toil that the death of his son had caused, he also hinted that his faith may sustain him through a run.

"My mother had an expression," the vice president told Colbert. “As long as you are alive, you have an obligation to strive, and you’re not dead until you see the face of God.” It was one of many phrases and expressions that Biden shared throughout the night.

Though many may have expected a humorous or exciting interview, Biden provided Late Show fans with something very different — a raw and personal look at a deeply humble man who doesn't seem to have much to hide.